The Most Beautiful Boy in the World

The documentary “The Most Beautiful Boy in the World” opens on a disturbing note: an aged Björn Andrésen, now 66 years old, walks slowly down a dilapidated, empty, blue-lit hallway. Paint is peeling from the walls. The ceiling is tattered and ruined. His silhouette, marked by his black overcoat, is nothing more than a lonely outline unearthing painful memories. A soundtrack of audio tapes from his childhood plays. Using cross cuts, editors Dino Jonsäter and Hanna Lejonqvist then transport us to February 1970, a cold day in Stockholm, the day that would change Andrésen’s life forever.

In “The Most Beautiful Boy in the World,” a heart-wrenching documentary, co-directors Kristina Lindström and Kristian Petri puncture the uneasy vein of child star building, explaining how often the practice ensnares the vulnerable. They do so by telling the story of once Swedish teen idol Andrésen, who at the age of fifteen was cast as Tadzio in Italian director Luchino Visconti’s adaptation of Thomas Mann’s novel Death in Venice. The part would bring the Swedish actor fame, adulation, and adoring fans only for the ensuing noise of stardom to rupture his life, permanently.

The documentary first thrives as art imitating life. The Mann novel had enraptured Visconti for some years, formerly crystallizing his plans to adapt it while filming “The Damned.” The basic plot takes place in 1911 at the Grand Hôtel des Bains on the Lido, and concerns an older composer who becomes infatuated with an adolescent Polish boy named Tadzio, an attraction the openly gay Visconti did not consider homosexual in nature. The story lives and dies with Tadzio, an ethereal beauty described as an angel of death with honey-colored hair.

Similar to the composer, Visconti becomes obsessed with finding this boy. For the casting he searched Hungary, Poland, Finland, and Russia before landing in Stockholm. Lindström and Petri have a wealth of footage from the audition to draw from. In the opening clip, the blonde-haired Andrésen walks in, and there’s a sense of melancholy to him, a forlornness not unlike a Romantic poet. You get the sense that he’s never auditioned before. His nervous energy is palpable, an energy that heightens when Visconti asks him to take off his shirt. Seeing his anxious smile, as though he’s afraid of disappointing, the natural frustration of there being no parents in the room, no grown-up willing to stop the leering audition, sets the emotional tone for the rest of the film.

Now the once teen idol, a kind of Timothée Chalamet of his era, is vastly different from the naive young man in the 1970 Super 8 footage. If you’ve ever seen Caspar David Friedrich’s painting “Wanderer above the Sea of Fog,” you’ll know it’s emblematic of the romantic hero: the young man looking over the vista of cloudy mountains toward his vast unknown future. There’s a sense of reflection and quiet abandonment to the work, an amber protected portrait of youth. The present-day Andrésen, bordering on frail, with his long, grey wispy hair providing half his weight, is Friedrich’s romantic hero, but now at the other side of the mountain. And he’s looking over a view that isn’t nearly as hopeful.

“The Most Beautiful Boy in the World” has a slightly fractured arrangement. Driven by Filip Leyman and Anna Von Hausswolff’s hard-charging score, Lindström and Petri's film cycles through the tragedies in Andrésen’s life, which are often more experientially connected than narratively. Rather his recollections often play as siloed investigations, a timbre the unraveling edit tries to piece together.

While fighting an eviction notice (his apartment is described as an “environmental hazard”) and working to maintain his relationship with his girlfriend Jessica Vennberg, he thinks back on the aftermath of working on “Death in Venice,” especially during the Cannes Film Festival. It’s here the moniker “the most beautiful boy in the world,” bestowed upon him by Visconti while in London, takes shape. In the clips, there’s a targeting on the director’s part: at one point, he explains how Andrésen’s lost some of his beauty now that he’s slightly older. Andrésen often veers very closely to equating homosexuality with pedophilia, which should offer some pause, even if the documentary doesn’t endorse the sentiment.

Andrésen also recounts the many times adults took advantage of him: his granny who first took him to the audition; the people at a Cannes afterparty at a gay bar; the amphetamines given to him in Japan; the disquieting patron in Paris who paraded him as a trophy. The actor is often opaque about what he dealt with, to the point of his experiences being indecipherable rather than easily explained. Such as the aforementioned Parisian trip, which reads as though he went into sex work but didn’t. His muddiness, which impedes the brisk pace of the documentary's opening third, is emblematic of the aftereffects of traumatic events, but doesn’t make for an easily digestible watch during the film’s middle third either.

It’s not until “The Most Beautiful Boy in the World” re-contextualizes again the generational trauma that led Andrésen to who he is now—the death by suicide of his mother—that the narrative solidifies around an emotional focal point. The bleakest instances occur when the Swedish actor reads his mom’s police report, which describes how her body was found, and when he remembers the child he lost to Sudden Infant Death Syndrome. By the film’s end, there are two overarching thoughts: “this was a man who was fated to be hurt” and we want to reach back into time and pull him away from that audition.

“The Most Beautiful Boy in the World” isn’t a perfect watch, and it's often confusing and confounding. But it gets at the heart of this forlorn figure, a once idol turned tragic Greek hero. It’s unflinching, and one of the most honest portraits of the pitfalls that can happen in child stardom. 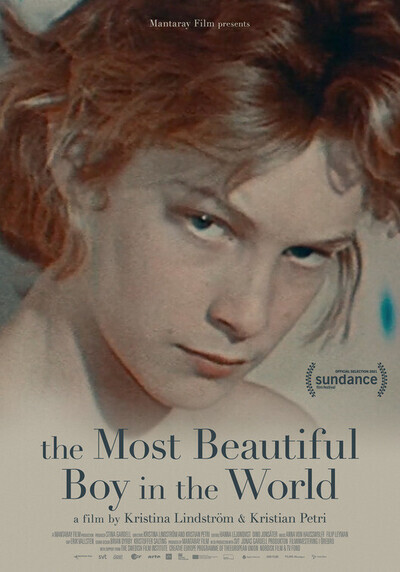 Margareta Krantz as Self

Hajime Sawatari as Self

Luchino Visconti as Self (archival footage)

Masatoshi Sakai as Self