A Chilean man and recent widower named Sergio answers a classified ad for an unusual job at a private investigation service. It's unusual in part because it’s looking for men between the ages of 80 and 90, who are good with technology, and independent. After he wins the gig, Sergio learns that he’ll be infiltrating a retirement home, armed with a pen that has a mini-camera, and thick-rimmed glasses with a camera inside as well. Sergio's mission is to make sure that one client’s mother, who is at the facility, is not being abused, or having her things stolen. It's a job that the stoic 83-year-old will take on with his clear sense of pride, and compassion—if he can just figure out his iPhone first. For however quaint and sporadically quirky it is, "The Mole Agent" is an earnest look at old age, and a community full of people just like Sergio.

Watching “The Mole Agent,” it can initially feel like there’s a greater scheme at play. Why are the cameras documenting what he's already going to record with fancy gadgets? Is this a set-up? Are we being lied to? But let me dispel that distracting worry now—the documentary's only motive is that it wants to show life inside the home, through someone initially removed from this community of lovely, but often lonely people. In the history of documentary filmmakers trying to infiltrate a space without altering it, it's one of the more playful ways to get cameras inside a retirement home that has a few problems, and to get people to talk. No one at the home knows that a spy is among them.

Sergio is there as the "eyes and ears" of his employer Romulo, but there is a warming element to “The Mole Agent” that Sergio is giving the residents an audience to speak to. They might think it’s just Sergio, but it’s the film viewer who also gets to learn about Perdita’s poetry, or the Bertita’s love of autonomy, or Marta’s kleptomania. The documentary does not rely on a talking head interview format, and yet it has the same effect—here are the thoughts and anxieties of different residents, thanks to Sergio's conversations with them.

Director Maite Alberdi makes her own presence known in the beginning in a clever way, with the camera from Sergio’s spy glasses showing the crew that’s in the room filming with him—a sound guy, a cinematographer, and a director. That visual context rings throughout, and you appreciate the documentary’s pivotal candid moments even more as Sergio is welcomed into the home of predominantly women, and talks to the different residents in heartening, low-key scenes that frame the sharp-dressed man more as a new friend than a visitor. Sometimes Sergio does what he's been sent to do, watching certain residents and writing copious notes, while a James Bond-like guitar accompanies his not-so-subtle work. But we hardly see his recorded footage from the pen or glasses, as the documentary is more about watching him sit and chat with these different women, his heart breaking for them. Meanwhile the camera stays back, looking through the glass of closed doors, or positioned behind some leaves blown by a gentle breeze.

One wishes that “The Mole Agent” reached a greater height with its message, or its frustrations about certain dehumanizing conditions in the retirement home. But the documentary succeeds with its tenderness, while vividly reminding us how easily society can forget its elders. Sonia, the woman Sergio has been sent to look after, is not the only resident who has family members who do not check in on them, and who ask others to do it. But thankfully there’s kind people like Sergio, and the sense that friendship knows no age. 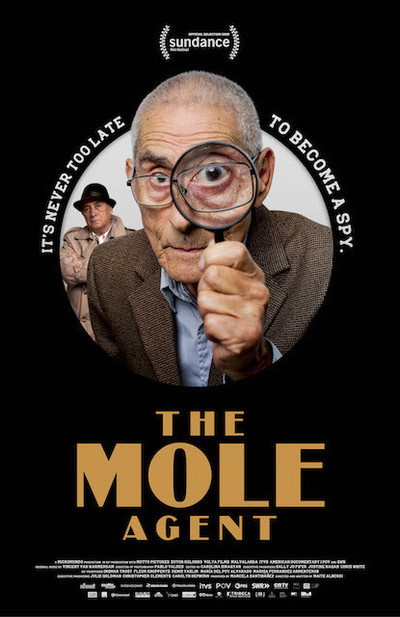