Sci-fi/horror-thriller "The Mind's Eye" is the kind of childish genre movie that gives genre movies a bad reputation. The reality within "The Mind's Eye," a horror film where psycho-kinetic misfits move things with their minds, resembles other films far more than anything outside of comic books and horror stories. There are some obvious references, particularly "Scanners," David Cronenberg's early masterpiece about over-stressed men who blow each other's heads up with their minds, but this film also has a stale comic book sensibility that makes its key relationships seem especially unbelievable. As an avowed comic book and horror film aficionado, it gives me no pleasure to dump on "The Mind's Eye," but this movie is amateurishly bad, and not in a fun way either.

In "The Mind's Eye," twenty-something psychic drifter Zack Connors (Graham Skipper) flees from mustache-twirling baddy Dr. Michael Slovak (John Speredakos) with the help of romantic interest/fellow psychic Rachel Meadows (Lauren Ashley Carter). Dr. Slovak tricks Connors into staying at the mysterious Slovak Institute of Psychokinetics because, well, Rachel is there. That's all the sense that you're going to get from this movie: Zack wants Rachel, and Slovak wants them both because he wants their powers.

There's a lot wrong with this under-developed scenario, right down to the fact that characters don't think or react to each other in plausible ways beyond a basic imperative to get to the next action scene. But let's start with Dr. Slovak, a generically domineering authoritarian. Dr. Slovak doesn't like to be touched, doesn't like his orders questioned and doesn't keep his word to his patients. When he's spat on, he licks the loogie up (though there's clearly nothing on his face but his beard). And when he declaims, he talks like Dr. Doom: "What you do, Zack—it will be child's play once I reach my full potential!" Dialogue like that creates a mandate to over-act, one that Speredakos lustily pursues with immodest abandon. Unfortunately, despite his zeal, Speredakos cannot be taken seriously. When Dr. Slovak gets amped up, he sounds like a cross between William Hickey and the Muppets' Gonzo the Great. And when Slovak exercises his psychic abilities, he looks badly constipated. Let's face it: some men just don't look photogenic whilst trying to move objects with their minds.

Like it or not, Dr. Slovak's villainous actions precipitate a crude on-the-run plot. Zack and Rachel run to Zack's estranged father's house while Slovak sends his evil minions after the two lovers. You know these guys are bad because one wears a black wool beanie, and the other has an eye patch. These heavies instigate the film's over-the-top but unimaginative kill scenes. But they don't really do much beyond yell things like "You're a dead man, Connors" before hoisting a cannon-sized pistol at their next would-be victim. These bland antagonists only exist in the realm of bad fiction, a magically hellish place where characters' motives and intelligence are both severely limited.

I'm something of a gorehound, and the action scenes are not only conceptually underwhelming, but also under-lit, poorly edited and amateurishly lensed. Sound effects supervisor/designer Graham Reznick delivers some delightfully pulpy noises, like the thrum that Zack's mind produces when he tries to move something with his mind. But for the most part, there's nothing here that horror fans haven't seen before—and better.

I really do hate to beat up on such a low-budget horror film. But there's a scene that made me stop worrying and groan with abandon. It's the one where Zack and Rachel inevitably consummate their romantic feelings. This sequence includes the following line, spoken by Zack: "My ... psycho-kinesis ... developed during my puberty." This is not a joke, nor is it an intentionally funny line: a real person says this, then proceeds to make a connection with another live human being, and then bang, zoom, they're getting intimate.

But wait, it gets worse. When Rachel and Zack have a moment, their ostensibly intense union is cross-cut with footage of Dr. Slovak receiving a syringe full of synthetic blue liquid. Speredakos's face quakes, as if he's having an intense orgasm. This image is ridiculously overheated, right down to the bead of sweat dripping from Dr. Slovak's nose. The water drop jiggles and dances in slow motion but is still there whenever we cut back to Slovak's face. It's the most tense sweating I've seen in a movie. Will the sweat drop off Dr. Slovak's proboscis or will it just keep jiggling back and forth while he's wracked with intense pain/pleasure? The unintended suspense nearly killed me. "The Mind's Eye" is never intentionally so moving though, leaving one to mutter and grumble about time spent on a film that delivers exactly what it promises to—exploding heads are kinda fun—and next to nothing else. 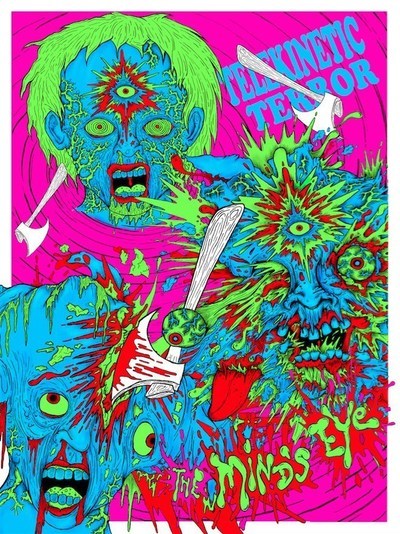