Although one might not ordinarily see many points of comparison between the two, the worlds of organized religion and professional wrestling enjoy a surprising number of similarities. Both find themselves in the middle of eternal battles between true believers who take every aspect as the unvarnished truth and naysayers who decry it all as ridiculous fiction; both have inspired any number of battles over the years between those who insist that the faith or wrestler of their choosing is the one true one and all others are impostors; both have seen the faith of their believers exploited by Donald Trump for his own personal benefit. With the release of “The Masked Saint,” a film that dares to combine religion and rassling into one oddball package, they can now claim to have something else in common in that they are both institutions that will presumably recover from all of the absurdities on display—quite possibly before I do, in fact.

As the film opens, Chris Samuels (Brett Granstaff) has decided to give up his career as a masked wrestler known only as The Saint in order to become the pastor of a Baptist church in a run-down Michigan neighborhood. (There is a good Knights of Templar joke in here somewhere but it currently eludes me.) Sadly, he doesn’t go out with a bang as much as a snap of his femur, courtesy of an evil opponent known as The Reaper, but soon he, relentlessly perky wife Michelle (Lara Jean Chorostecki—yes, the same one who previously appeared on “Hannibal”) and terrifyingly perky moppet daughter Carrie (T.J. McGibbon) are off on their new adventure. Alas, the church is in disrepair, the congregation is dropping and after Chris winds up alienating rich blowhard Judd Lumpkin (Patrick McKenna), who has been the church’s main source of income as of late, it appears that his first pastorship may be in jeopardy when his wife and parishioner Ms Edna (Diahann Carroll. . . yes, Diahann Carroll) convince him to take up the offer made by his sleazy former promoter (Roddy Piper) to return to the ring to earn the needed money. The other parishioners won’t know what he is doing and besides, as Michelle points out, “Where in the Bible does it say ‘Thou Shalt Not Wrestle’?” (If it does, it is probably somewhere in Leviticus.)

The plan works and soon Chris is supplementing his ministering by wrestling three times a week and earning enough money to help turn the church around. The heroic-like violence is not just limited to the ring either—when he comes across the evil local pimp (Dwain Murphy) slapping around his one hooker (Danielle Benton) for excessive praying and lack of respect, Chris puts the mask on and dishes out some vigilante justice on the guy’s skull. This attracts the attention of what appears to be the only cop in town (Mykel Shannon Jenkins), but Chris not only skirts his attention, he manages to continue his vigilante activities and ruin the pimp’s business by admitting his employees and customers into the flock. Inevitably, Chris begins to get a swelled head about his accomplishments and begins acting curtly towards his loved ones. However, as we all know, pride goeth before the technical fall and when the grumpy pimp trashes the church and Chris is forced to admit his double life to his parishioners (though he keeps the vigilante stuff to himself), he almost loses everything. However, it mostly clears up for him in time for the big climax where all of the various subplots happen to turn up in time to be resolved before watching the now-unmasked Saint try to regain his title from The Reaper.

At the very beginning of “The Masked Saint,” a title card informs us that what we are seeing is “Inspired by real events.” What this means is that there was a guy by the name of Chris Whaley who wrestled professionally for about ten years before quitting in 1988 to study theology before becoming a pastor and eventually writing the novel on which this film was based. Indeed, the early scenes observing Chris during his first fumbling attempts at bring new life to the congregation are the best because while they may be a bit on the ham-fisted side, they at least have a trace of believability to them. However, once the film shifts away from that to focus more on the surreptitious wrestling and vigilante work, it begins to suggest what “Nacho Libre” might have been like if the laughs were all of the unintentional variety (which is still more than were on hand in the real “Nacho Libre”) before getting into some weirdly disturbing areas (such as a subplot involving an abusive husband that is resolved in a manner that is borderline offensive) that add nothing but extra minutes to a running time that is stretched out far too long for its own good.

Although nowhere near as obnoxious as such recent faith-based offerings as “God’s Not Dead” and “Do You Believe?,” “The Masked Saint” is still kind of a chore to sit through, even for those predisposed to like anything that brings together Christian faith and sleeper holds. The only thing about it worth remembering is that it was the last film made by wrestler-turned-actor Roddy Piper before his death last year. Film fans will remember him as the star of “They Live,” John Carpenter’s brilliant piece of cinematic agitprop in which he played a homeless man who discovered that aliens were living among us on Earth disguised as Republicans that could be revealed only by wearing special sunglasses. In that film, he uttered the immortal line “I’m here to chew bubblegum and kick ass—and I’m all out of bubblegum.” In the case of “The Masked Saint,” if you have to choose between seeing it or chewing bubblegum, do yourself a favor and stick with the sweets. 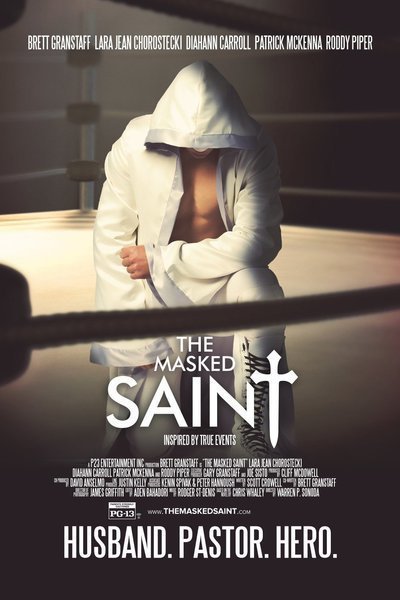 James Preston Rogers as The Reaper