Emma Dante’s “The Macaluso Sisters” opens on a playful note. Five sisters of various ages are running around their rooftop apartment in Palermo, Sicily, before their first customer of the day. The orphaned girls make their living by renting out doves for special events, which then faithfully fly back to them once released. Their home is charmingly chaotic, with dozens of birds cooing and fluttering in a playroom-turned-makeshift aviary. Family photos line colorful walls with black-and-white faces looking over their childish antics. Maria (Eleonora De Luca) is the eldest, corralling her sisters and the business dealings. The second oldest, Pinuccia (Anita Pomario), is a touch more vain and more interested in boys than responsibilities. The next sister in line, Lia (Susanna Piraino), is perhaps the most difficult of the group, preferring to be left alone with a good book than to be told what to do. Katia (Alissa Maria Orlando) and the youngest, Antonella (Viola Pusatieri), round out the batch with meek smiles and carefree spirits. Once the day’s deal is done, the girls treat themselves to a beach day, an idyllic escape that looks like a dream. They find adventure, games, and one of them even scores a secret romance. But their happiness is short-lived. As the sun mellows into a golden afternoon, tragedy strikes, changing the girls’ lives forever.

Based on Dante’s 2014 play of the same name, “The Macaluso Sisters” is an unconventional drama reflecting on grief and aging. That opening chapter is just the beginning that soon gives way to gloomier days when the golden summer sun no longer shines. New actresses step into the roles, giving a tired eyed view of the elder sisters’ now strained relationships. But as rough as things get in this go-around, there’s yet another portion, an almost entirely wordless coda showing what has become of the Macaluso Sisters and their doves. It’s a bitter, harsh contemplation of the way time ravishes our ties to each other as it does to the Macaluso home. With each passing chapter, the charm wears down, and its breakage becomes more and more apparent. Neglected and unloved, the apartment is left a shell of its former self, becoming a visual statement on the family that crumbled within its walls. And although tragedy defines this story, it feels somewhat obscured. The movie doesn’t tell the audience what happens until much later, and we’re left to fill in the blanks ourselves.

Dante, who wrote and directed the filmed adaptation of her play, carries over some of its theatrical affectations to the screen. The apartment, like a stage, is where much of the drama spills out. As set up by production designer Emita Frigato, the close quarters become a boxing ring for the sisters to fight in, and later, it doubles as their museum of keepsakes and memories before morphing into a tomb. Occasionally, repeated gestures and callbacks to the story’s first chapter crop up in heartbreaking moments in the film’s latter sections, much like the way grief never quite leaves us but returns in unexpected ways.

When the film revisits that day on the beach, as it does a handful of times, each flashback feels more and more like dropping into another universe, its upbeat moments are alien to what ends up happening. Dante and cinematographer Gherardo Gossi use their images to mirror the sisters’ descent. So much of the story is told through visual poetry, like contemplative shots of Antonella playing with the doves or shots of the house to observe its decay. Sometimes, these lyrical moments are disrupted by the overuse of Erik Satie’s “Gymnopédie No. 1” or a shot that lasts too long in the hopes of squeezing out another tear from the audience. But any missteps feel minor in comparison to the film’s most poignant moments. There’s a strange peace and acceptance in the film, painful as it is, that life did not work out in favor of the youthful hopes and dreams of its characters. Perhaps it’s because so many of us have had to mourn some sort of loss and move on with our lives like the family. “The Macaluso Sisters” acknowledges how deeply these heartaches can be felt through the decades and that absence may never really get any easier. 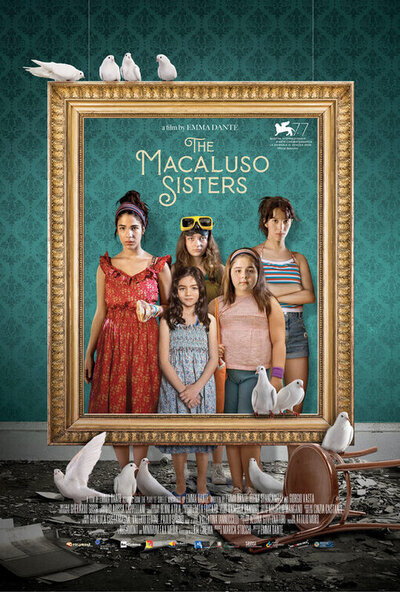