"The Lure," a Polish musical about man-eating teenage mermaids, is genuinely weird. That's not just a comment on the film's unabashedly freaky subject matter, but also a half-hearted complaint about the filmmakers' off-kilter execution. Narratively, "The Lure" is fairly rote: two sisters use their siren-like powers to seduce humans as cabaret singers, but one of them wants to assimilate, while the other seems to exist solely to remind her sister how stereotypically voracious teen girls, I mean mermaids can be. It's a fairly predictable parable, though arguably because "The Lure" is fundamentally a modern fairy tale. But when the music numbers kick in, you're reminded that this movie is, tonally, an emotional rollercoaster: characters wallow in their isolation, try to get ahead through sex, song and/or murder, then repeat that same cycle of manic effusiveness. Watching "The Lure" is a bit like having manic depression—the thrilling high points are just as relentless as the crushing low-tide ebbs.

"The Lure" begins on a storybook-simple note: mermaids Gold (Michalina Olszanska) and Silver (Marta Mazurek) are about to reel in their latest victims when they are interrupted by cabaret singer Krysia (Kinga Preis). Krysia initiates the girls into a glitzy, seemingly effortless life of sparkly sequin outfits and high-beam spotlights. Or, at least, she introduces them to the men who will initiate them into this world: Krysia is just an enabler since she is a female artist with a token amount of power granted by her club owner boss (Zygmunt Malanowicz). "The Lure" is very careful about making that distinction since it is, like superb 1982 punk rock/riot grrl manifesto "Ladies and Gentlemen, the Fabulous Stains" before it, about the roles that empowered women are given by male-dominated society.

Initially, Silver and Gold's rivalry and their awe-struck wonder at human society is fascinating. Most of the duo's musical numbers, like the one where the girls go shopping for human clothes and giggle that "the city will tell us what we need," are thrillingly energetic and bracingly clever. These characters are constantly being seduced by human influences, especially Silver's love interest Mietek (Jakub Gierszal), but they're hardly babes in the woods. They unashamedly show off their bodies, heartlessly flirt with and then abandon male prey, and ply themselves with all the new experiences they can, including their first cigarette and their first same-sex liaison.

But as Gold and Silver's respective experiences start to drive them apart, the film's plot starts to become safe and predictable. I want to say that the energy of the first 30-40 minutes does not sustain itself over the course of the picture, but that's not quite right since the movie's first half has its fair share of tonal hills and troughs, too. "The Lure" doesn't always want to win you over since it is ultimately about the wild moods and relatively normal capriciousness of its two female leads. We root for them because they are leading lives that are not strictly determined by puritanical norms. They get to choose, and that means making the wrong decisions and living with uncertainty ... and then singing about it (Zlota's song about loneliness is one of the best in the film).

Still, just because director Agnieszka Smoczyńska and Robert Bolesto present their characters in a consistently thoughtful light doesn't mean that their characters' problems are consistently compelling. Bolesto's scenario may show uncommon sensitivity towards Mietek, a character who is neither a one-note exploiteer nor a hapless pretty boy. But the fact that so much depends on him and Silver's romance is dispiriting, as is the film's generally uninspired take on female sexuality. Silver and Gold are always compelling when they perform for a crowd because in these scenes, Smoczyńska and Bolesto make their heroines' process of self-actualizing as fun as a story about killer mermaids should be.

But the makers of "The Lure" drop the ball when their reliance on archetypal power dynamics dictates when characters must sober up and act according to their types. Smoczyńska and Bolesto deserve the benefit of the doubt since their story isn't necessarily bad because it's not non-stop fun. But in this case, quiet and serious simply does not suit a movie where bare-breasted teenagers sing and slay their way into viewers' hearts. "The Lure" deserves to be seen, though it's sadly not as joyfully deranged as it could be. 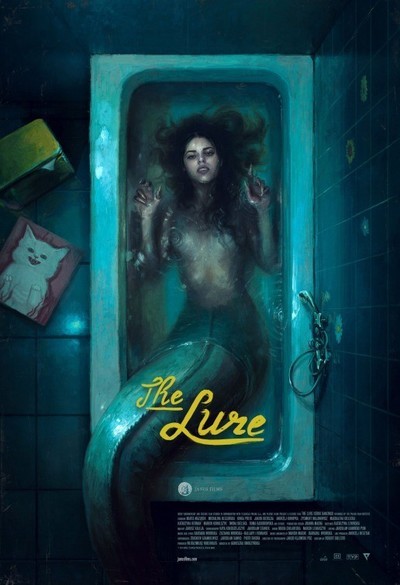