But "The Living Sea" basically only wants to present pretty pictures. Some of them are impressive: a Coast Guard rescue boat plowing through heavy seas. A strange, recently discovered deep-water creature named the Cyphonophon, made up of hundreds of different individuals that form specialized sections of an organism half the length of a football field. Time-lapse photography of the Bay of Fundy in Canada, where swift tidal currents make a spectacular difference in sea level during the course of a day.

But the movie is content with first impressions. A dummy is thrown overboard by the Coast Guard, ostensibly to demonstrate its skill in high seas rescue. But there is no footage of a rescue (an end credit shot shows the boat returning to the dummy, in seas that are suspiciously calmer). The Cyphonophon is shown on video monitors as a deep-sea robot sub examines it, but the whales and other great sea creatures are seen only in ordinary travelogue footage. And if the time-lapse photography at Fundy Bay serves a dramatic purpose - we are amazed by how far the tides fall and rise - what's the purpose of later speeded-up shots of sailboats zipping around a bay? One section of the movie looks at surfing. We've seen shots like these before, over and over again. One shot shows the towering kelp fields off California; "Into the Deep" has more impressive shots.

There's a frustrating visit to the Palau Islands, near the Philippines, where a "landlocked ocean lake," cut off since prehistoric times, shelters rare species. But we see few of them, and a segment on the people of the islands, where in the past "each family tended a reef like a garden," is perfunctory.

I would have liked to see a whole film on many of these individual topics. Life on land and sea in Palau. How the Coast Guard plucks a sailor from a raging sea. How deep-sea exploration is exploding the count of living species on planet Earth. "The Living Sea" seems reluctant to look very deeply into anything, as if afraid of testing its audience's patience. But it takes less patience to look at one interesting thing deeply than many interesting things hardly at all.

"The Living Sea" will play daily at the Omnimax Theater of the Museum of Science and Industry every 50 minutes, starting at 10 a.m., with the last show at 3 p.m. on weekdays and 4:40 p.m. on weekends.

There will be evening screenings at 7 and 8 p.m. Fridays and Saturdays, and a screening in Spanish at 5:30 p.m. Sundays. 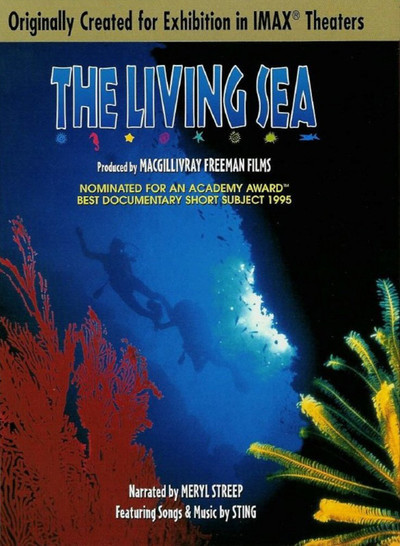