Movies like “The Little Things” feel like a vanishing breed. In the wake of the success of “The Silence of the Lambs,” there seemed to be a dark, brooding thriller adaptation every week with titles like “Kiss the Girls” and “The Bone Collector,” and it felt like half of them starred Denzel Washington. In recent years, this genre has largely become the product of television, as shows like “True Detective” and “Mindhunter” have taken on stories of men haunted by the crimes they investigate. That’s part of what makes “The Little Things” feel dated, although the way it recalls better films with similar themes, particularly David Fincher’s “Seven,” does it no favors too. It’s a movie that's constantly on the verge of developing into something as intense and haunting as writer/director John Lee Hancock wants it to be, but it never achieves its goals, especially in its final half-hour. Some of the major stuff here works, including a performance from Washington that’s better than the movie around it (yet again), some striking L.A. cinematography, and an effective score, but one could say that it’s the little things that hold it back. A few big things too.

Joe Deacon (Washington) is a disgraced former L.A. cop who now works in Bakersfield, living alone on the edge of society. Our story unfolds in 1990 for little reason other than proximity to The Night Stalker case, which still hangs in the air when a new serial killer emerges in the City of Angels (and "The Little Things" was reportedly initially written a quarter-century ago, which could explain why it feels so much like the potboilers of that era). It’s revealed that ‘Deke’ lost his marriage, had a heart attack, and had to leave town because of a particularly brutal case that he couldn't solve. He’s haunted and unwanted by his former colleagues, including Captain Carl Farris (Terry Kinney) and Detective Sal Rizoli (Chris Bauer), but Deke gets sucked back into that which nearly destroyed him when he ends up helping his replacement, Jim Baxter (Rami Malek) with the serial killer case that’s terrifying the city. It’s not long before they discover that a loner named Albert Sparma (Jared Leto) is their likely suspect, and “The Little Things” becomes a cat and mouse game between the two detectives and the creepiest guy in L.A., a disturbing character who appears to get off on playing games with the cops.

The first third of “The Little Things” has an effective procedural quality as Baxter feels out whether or not the legendary Joe Deacon can help him solve the case of his life. Of course, there’s an inherent new school vs. old school component to the storytelling that recalls “Seven” as well as providing a vision of Baxter’s future in the emotionally devastated Deacon. The older cop is quite literally haunted by the victims, seeing them in the middle of the night in his dingy hotel room. The idea that a cop can get so invested in a case that it destroys them gives Washington a lot to work with but it’s ultimately shallow here because of how little we get to know the victims—they're just ghosts and nothing more. Other than the underutilized Natalie Morales as an officer and Michael Hyatt as a coroner, women are largely just victims or spouses in the background in this story.

The midsection of “The Little Things” gets by on the immediacy of Washington’s performance. As Leto over-acts around him, Washington grounds everything he does, making an interrogation scene and even a bit wherein Sparma taunts him on a road more effective than they would have been in a lesser actor’s hands. Washington has an incredible skill when it comes to being in the moment. We believe he’s listening, reacting, and responding in a way that doesn’t sound like rehearsed lines or blocked behavior. The opposite is true of Leto, who seems incapable lately of doing anything that doesn’t seem exaggerated, and leans into all of his worst tendencies here. Malek falls somewhere in the middle, feeling too broadly eccentric at first, but he either improved as the film went along or I just got used to his mannerisms. Still, it’s hard to shake the feeling that Washington is in a more grounded movie than his co-stars. He’s trying to do “Zodiac” while they’re doing “Along Came a Spider.”

Hancock's film later unravels when its lack of urgency isn't replaced by tension. The new guy starts to succumb to the same obsession that destroyed the old one, like clockwork, and then the movie twists a few times in ways that truly defy logic, and lead to a dissatisfying ending. It feels like Hancock is trying to tell a very “True Detective” story—one about how a case can pull the people investigating it apart from the inside in a way that breaks them forever—but he can’t figure out how to shape that into an intriguing mystery simultaneously. By the time it’s over, it’s hard to shake the feeling that it’s added up to, well, nothing. 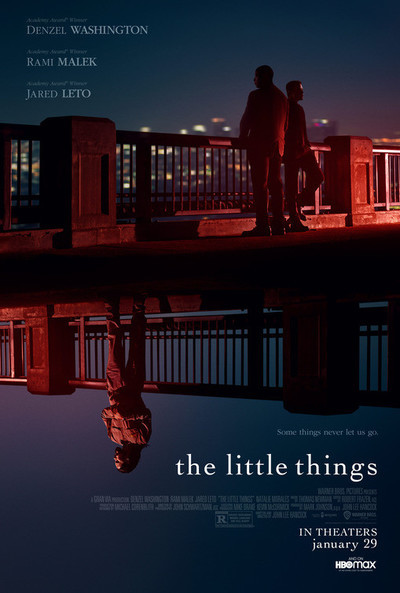