The Australian sex comedy “The Little Death” coyly takes its title from the French idiom for orgasm. It toys with the idea of being racy and dabbles in dark humor. Similarly, it flits around several couples struggling with intimacy issues and it meanders between various types of tone.

There is simultaneously too much and not enough going on in writer/director/co-star Josh Lawson’s feature debut. He crams in too many people and plot lines but offers too little in the way of character development and credible emotion. And he weaves a supposedly hilarious sexual assault thread throughout the proceedings, which may leave you feeling icky.

As we’re introduced to each of the Sydney couples and their sexual fetishes, we begin with Lawson himself and Bojana Novakovic as Paul and Maeve. While awkwardly messing around in the bedroom one night, Maeve informs Paul that she would like him to rape her, a misunderstanding that’s played for uncomfortable laughs. It’s her fantasy, she explains—but she doesn’t want to know for sure that it’s Paul if and when it actually happens. The misguided notion of rape as a source of sexual pleasure, rather than an act of aggression, consistently taints this story line.

Dan (Damon Herriman) and Evie (Kate Mulvany) also are trying new ways to reignite that spark. They’re just not communicating their needs to each other these days. Their couples therapist suggests a little role playing, which Evie initially has trouble doing with a straight face. But Dan takes this assignment seriously to the extent that he starts thinking he’s a real actor, with increasingly elaborate costumes, props and backstories for his naughty characters. His self-seriousness provides a few laughs here.

Meanwhile, Richard (Patrick Brammall) and Rowena (Kate Box) are in an even more tenuous position. They’ve been trying methodically to have a baby for the past three years, rendering sex a matter of scheduling rather than spontaneity. (“How’s your cervical mucus?” he asks politely one morning.) But when Richard’s father dies suddenly—and Rowena discovers the sight of him sobbing surprisingly turns her on—she starts finding ways to make him break down and cry to prompt passionate romps. It’s an amusingly twisted concept, but it also results in the darkest of the film’s endings.

The marriage of middle-aged Phil (Alan Dukes) and Maureen (Lisa McCune) is in the worst condition of all. He’s a milquetoast corporate drone; she’s a belittling shrew. She consistently rejects his efforts to get frisky. But when Phil realizes that he’s attracted to Maureen when she’s asleep—and quiet, and pliable—he begins drugging her tea at night, then having his way with her. This mostly consists of dressing her up and cuddling, but the idea that she’s being physically manipulated when she’s practically unconscious is also a little queasy-making.

Lawson bops around between all these couples as their individual fetishes escalate, resulting in a few amusing moments and a lot of jarring tonal shifts. “The Little Death” veers from wacky physical comedy to forced poignancy to tragedy to romance, none of which is ever terribly convincing. Much of the problem lies in the fact that we don’t really know anything about these people outside of these small boxes in which we view them. They’re defined almost exclusively by their relationship problems. When Rowena shows up at Maeve’s house late into the film, and Maeve mentions that they’re longtime friends, it’s like: “Huh? Where did that come from?”

But Lawson also ostensibly aims to tie these stories together with the appearance of a 60ish new neighbor named Steve (Kim Gyngell). He knocks on each of their doors with a friendly smile, homemade cookies and the admission that he’s a registered sex offender, but they’re all too distracted or busy for this piece of information to register. It’s an element that never quite works and has an odd payoff.

The last couple we meet, though, is the most intriguing of all. Monica (Erin James) is an operator for an online video chat service that makes phone calls for the hearing impaired. Sam (T.J. Power) is a deaf man who rings her up in the middle of the night with an unusual request: He’d like her to help him connect with a phone sex operator. The result is hilarious and awkward and sweet, and it allows Monica and Sam to bond quickly and powerfully. This may sound like a contrived meet-cute, but it ends up being the most accessible and charming story of all.

Here, Lawson comes up with a clever concept and executes it effectively. Despite the raunchy, graphic places this segment goes, it wraps up in unexpectedly romantic fashion, and it finally finds the tricky mix of tones that had eluded Lawson all along. 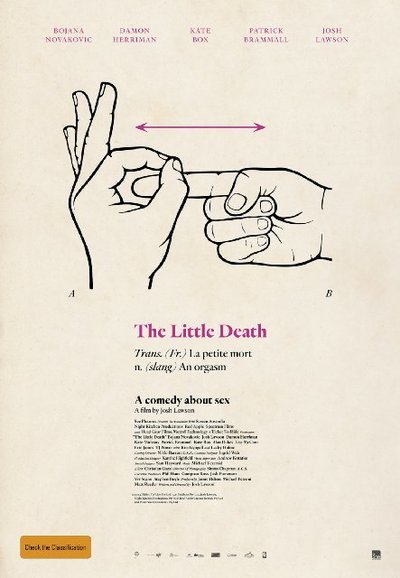