The Last Married Couple in America

Now here's an appallingly dimwitted comedy. It's about marriage, I guess, and about how so many people are getting divorced these days that if you find yourself still together after 20 years you can almost wonder if you're "The Last Married Couple in America." But the people in this movie seem so spaced out about why they're married or divorced that the real miracle is how they lace their shoes in the morning.

There's nothing more cloying than a film about "real" people in which the people talk like prisoners of a sitcom, and the plot is so painfully artificial that even the actors seem incredulous. But that's what we have here. The plot's so awkwardly put together we can almost overhear the story conferences on the sound track. The movie makes it necessary, for example, for the happily married couple to break up, and so they do, but there's no reason for it and we're never convinced that anything in this movie is inspired by any kind of authentic human motivation.

The resulting scene in the doctor's office is about as embarrassing as you can imagine, but then this whole movie is embarrassing, maybe because it has a smarmy attitude toward sex that's just not convincing. To put it another way, what happens in this movie is a lot too kinky to be convincing, given the actors who are asked to involve themselves in it.

There is a sense in which Hollywood has just plain lost touch with life as it's really lived, and this movie is depressing evidence of that. The title gives us a promising premise: We'd be interested in a movie about a marriage that's survived and still works, especially if it gave us recognizable, plausible characters. But this movie just doesn't.

The sexual events in the film seem drummed up out of the letters columns of swinger magazines. The sets look like sample rooms in furniture stores. The characters don't live their lives, they survive sitcom plot checklists. This movie is almost a curiosity, it's so removed from the tones and rhythms of everyday life. 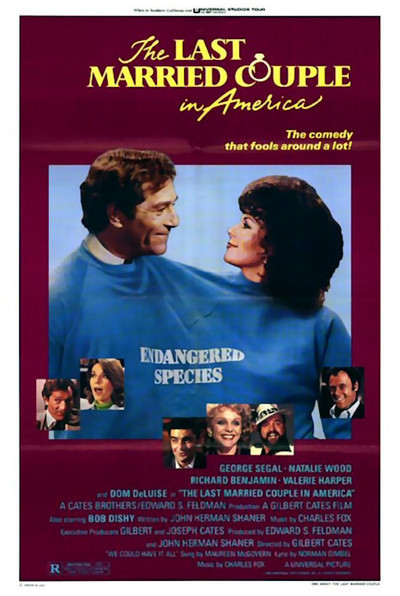 The Last Married Couple in America (1980)