A warning for fans of punk rocker-turned-actor Henry Rollins: Black Flag's former lead singer doesn't have much screen time in "The Last Heist," a dinky bank heist horror-thriller hybrid. Rollins ("Sons of Anarchy," "He Never Died") plays Bernard, a creepy religious zealot who we soon learn is an eye-snatching serial killer. Bernard is the source of the film's high concept premise: a bank heist that goes horribly wrong once the would-be thieves discover that one of their hostages is a ruthless killer. The film rarely comes to life because Rollins, the only compelling actor in the otherwise amateurish cast, is underutilized, and virtually everything else underdeveloped.

As I watched and waited for Rollins to inevitably dispatch his co-stars, I thought about the early movies of John Carpenter, particularly "Assault on Precinct 13" and "Halloween." "The Last Heist" is more like "Assault on Precinct 13" in that it follows characters as they selectively ally themselves against mutually threatening forces. The main difference between Carpenter's film and "The Last Heist" is that all of the latter movie's characters are relatively unsympathetic. The profanity-prone bank robbers, led by smooth-talking Paul (Torrance Coombs) are not as bad as Bernard because Bernard murders without remorse. But Bernard isn't as bad as Sinclair (John York), an impersonal, all-business private contractor that has been on Paul's trail for months. You could argue that Danny (Michael Aaron Milligan), a straight-arrow bank teller, and Pascal (Victoria Pratt), a by-the-book police officer, are the film's most likable characters. But for that to be true, you'd need reasons to like them beyond a general need to root for someone.

The general ugliness of the film—its inane over-reliance on curse words, and flashy gore, as well as its cynical every-man-for-himself attitude—wouldn't be so bad if director Mike Mendez ("Lavalantula") and screenwriter Guy Stevenson ("Mike Tyson Mysteries") made Danny and Pascal more relatable. Instead, we never get to know these characters beyond their tics and abilities. Paul has a history with Danny, but there's not much tension or love lost between the two characters, who smile and growl their way through their interactions. And Pascal doesn't do much but show up her colleagues, and protest when things don't go her way. This isn't exactly the sturdiest of foundations for a heist thriller.

Matters get thrown out of whack by Bernard, a menace that often disappears, and nobody seems to care about. Rollins spouts cliched lines, like "the eyes are the windows of the soul," and beams like a misbehaving toddler who just ate a handful of marbles. But Rollins's physical presence—he's a squat, mean-looking muscleman of the Schwarzenegger variety, only with tattoos, a grey buzz cut and beady eyes—is what makes him so imposing/charismatic, making it impossible to find him scary when he's so often lurking around somewhere off-screen. Rollins is arguably not strong enough to support a film on his own, though he is charming enough to make sub-par material look better. Still, he's only as good as his material. And in the wrong hands, scenes where he savagely takes down C-grade bit players make him look like the best Phil Hartman character that Hartman never came up with.

Still, I feel bad beating up on "The Last Heist" because it feels like a weirdly passion-less passion project. At some point, somebody thought it would a great idea to pit Henry Rollins against a bunch of armed robbers. Maybe they thought about Carpenter's movies too. Maybe they just thought they were doing something so original that they could coast on creative fumes. I don't know what happened here, but this movie feels like it ran out of money on day two, and everybody but the people in front of the camera knew it. Rollins completists may want to reconsider their priorities. 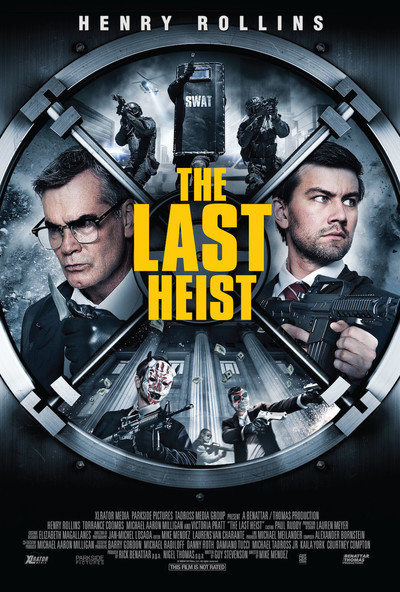