There's nothing quite like Eugene Jarecki's "The King," an overstuffed, meditative and—at times—very strange documentary about Elvis Presley, America in decline, the rise of Trump, 20th and 21st century culture, imperialism (military, economic, and cultural), and the nature of fame (to name a few). "The King" is so vast it often strains to make connections, but its form—an intricate intersecting montage, a flashcard bombardment of images and clips—keeps the film chugging along, just like Elvis Presley's 1963 Rolls-Royce Phantom V chugs along, driven around the country by Jarecki himself (although at one point, Ashton Kutcher takes the wheel, because that's the kind of movie it is). Jarecki, followed by a road crew to handle the intermittent breakdowns, follows the path of Presley's life, trolling the streets of Memphis, or Manhattan, or Nashville in the gleaming enormous car. The film goes all the way to Bad Nauheim, Germany, to visit the town where Presley was stationed during his stint in the Army. In 1991, rock critic Greil Marcus wrote a book called Dead Elvis: A Chronicle of a Cultural Obsession about the impact of Elvis' death (more so than his life) on American culture. Marcus digs into the craziest corners of fandom, fascinated by the tributes (mocking and adulatory), cartoons, tabloids, and the "Elvis Week" ritual at Graceland. "The King," filmed almost 30 years later, could be seen as a next phase in that ongoing "cultural obsession."

Jarecki picks people up along the way, who ride for a while with him in the Rolls. Often they are singers and musicians, and as the car glides through the streets, they'll play songs. Sometimes the singers are famous (like Emmylou Harris or Immortal Technique), sometimes they are local indie musicians, or, in one joyous scene, students at the Stax Music Academy in Memphis singing "Chain of Fools" a capella. Sometimes the conversation is about Elvis. Other times it's about the minimum wage, or the economic devastation of Detroit, post-car-industry. As if that weren't enough, a parade of talking heads weighs in, each with their own particular take on Elvis, negative, positive, ambivalent. No one view is prioritized. This is not a work of hagiography (although, on some level, it is. What other cultural figure could even take being the subject of a documentary like this?) "The King" has a restless, kaleidoscopic, take-a-snapshot-and-move-on energy. In many ways, it's a documentary about everything, it's a documentary about "then" and it's a documentary about "right now."

A short list of some of the talking heads includes Jerry Schilling and George Klein (personal friends of Presley), Greil Marcus, Peter Guralnick (author of the 1998 2-volume biography of Presley), author and activist Van Jones (also featured prominently in Ava DuVernay's "13th"), Chuck D, whose lyrics “Elvis was a hero to most but he never meant shit to me” echo down through the decades, and Mike Myers, who says, "I'm here to represent the Canadian immigrant view on Elvis." Nobody agrees with each other. The interviews are interspersed throughout, so that people appear to talk and argue with one another, provide point and then counterpoint, a perfect embodiment of the reality of there being different versions of reality.

But it's the people who join up with Jarecki along the way, sitting in the passenger seat, who give "The King" some of its most insightful and entertaining moments. You never know who is going to show up. James Carville. Alec Baldwin. Leo "Bud" Welch. Memphis Mayor A.C. Wharton! It's unclear what Ashton Kutcher's thoughts on his own comparatively minimal fame have to do with anything. "The King" could use some serious trimming. Ethan Hawke, a consulting producer on the film, is a voluble Elvis fan, and a constant presence in the passenger seat, regaling us with the well-known details of Presley's history. (At one point, Hawke complains about Presley always choosing the big-money option, whether it was the movies or the International Hotel contract in Las Vegas. But Hawke, born middle-class and now a wealthy movie star, doesn't factor in the scars of childhood poverty. Back when Presley signed the movie contract with Hal Wallis, he was asked by a reporter why he wasn't devoting himself still to live touring. Presley's reply gets to the heart of the matter: "'Spect you've never been poor.")

Four editors are credited on "The King" (Simon Barker, Alex Bingham, Èlia Gasull Balada and Laura Israel) and it's daunting to consider the job of piecing the film together. There are clips of FDR, and clips of the children's show Barney. We see O.J. trying on the glove. Then we see Presley bombarded by fans. There's footage of violent Trump rallies and Presley's mother Gladys throwing a snowball on Graceland's front lawn. The goal doesn't seem to be to create a cohesive narrative. The film is messier than that, and the mess is in its favor. (The title change—from "Promised Land" to "The King" is a big mistake. "The King" makes it sound like it's going to be yet another Elvis documentary, but "Promised Land" has a sarcastic bite, especially as the film builds in momentum.)

Throughout, Jarecki keeps going back to stunning aerial footage of the car driving through empty deserts, farmlands, coastlines. There are almost erotic closeup shots of the car's side mirrors, radio console, steering wheel, door locks; the Rolls is filmed like it's an objets d'art, as indeed it is. In 1956, the year Elvis' fame went mainstream, a 45 RPM was inserted into Teen Magazine called "The Truth About Me," and in it, Elvis quietly spoke about his life. He said, "I suppose you know I've got a lot of cars. People have written about it in the papers and a lot of them write and ask me why. When I was driving a truck, every time a big shiny car drove by it started me sort of daydreaming. I always felt that some day, somehow, something would happen to change everything for me, and I'd daydream about how it would be." Cars are the ultimate symbol, even now, not just of wealth, but of freedom and independence. In 1963, after being a Cadillac-man for years, Presley bought the Rolls while ensconced in Bel Air, living the cloistered life of a movie star. Initially dark blue, he had it repainted a shimmering silver-blue. The Rolls was a symbolic choice, for those paying attention.

David Simon, journalist, Elvis fan, and creator of "The Wire," addresses this issue while hanging out on a stoop with Jarecki, as the road crew tries to fix the broken Rolls. Simon criticizes Jarecki's choice to do the movie with the Rolls in the first place. It's a snooty car. (Cue the "Do you have any Grey Poupon?" commercial.) Simon says bluntly, "It's a bad metaphor. The better metaphor is one of his Cadillacs." Most importantly, the Cadillac is American-made. Simon has a point.

Late in the film, an old guy with a guitar sings a blues song in a junk yard, with dismantled and crushed cars towering around him. Metaphors proliferate in "The King" with dizzying speed, glanced at and tossed aside, or lingered on and contemplated. The effect is hypnotic, thought-provoking, and profoundly mournful. 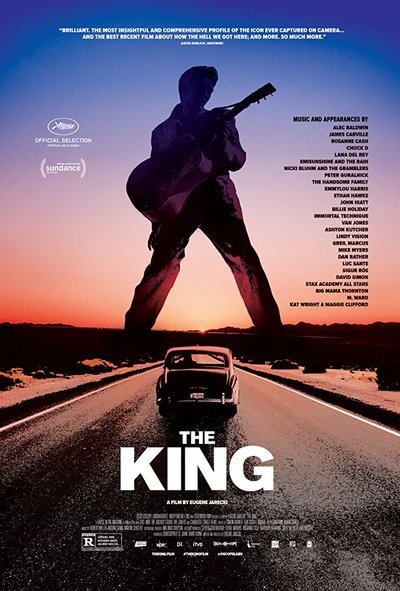 Tony Brown as Himself

James Carville as Himself - US Political Analyst

Chuck D as Himself

Maggie Clifford as Herself

Radney Foster as Himself

Patricia Gaines as Herself

Mary Gauthier as Herself

Emmylou Harris as Herself

Ethan Hawke as Himself

John Hiatt as Himself

George Klein as Himself

Ashton Kutcher as Himself

Greil Marcus as Himself

Justin Merrick as Himself

Mike Myers as Himself

Jerry Schilling as Himself

Immortal Technique as Himself

Linda Thompson as Herself

M. Ward as Himself

Leo Bud Welch as Himself

Kat Wright as Herself