“The Hustle,” a con comedy starring Anne Hathaway and Rebel Wilson, is light and slight and utterly forgettable as soon as it’s over. It is the kind of movie you watch on an airplane—perhaps on the way to someplace luxurious and relaxing like the South of France, the film’s setting—while falling in and out of naps.

It’s not terrible. It’s not anything, really, except an excuse for Hathaway to swan about in a series of clingy dresses and fake accents and Wilson to pratfall and deadpan her way from one outlandish scheme to the next. Each actress seems totally committed to the silliness and physicality of her role. Unfortunately, they also seem to be acting in separate movies from each other and never find the chemistry or groove necessary to make this kind of material truly sing.

Director Chris Addison’s remake of the 1988 Michael Caine-Steve Martin comedy “Dirty Rotten Scoundrels,”—itself a remake of the 1964 David Niven-Marlon Brando comedy “Bedtime Story”—takes a basic formula and gives it a gender swap. A couple of con artists con each other, then they realize they can con people out of even more money if they team up, then they realize they can’t trust each other (because, duh, they’re con artists) so they devise a competition to see who can con an unsuspecting tech billionaire (Alex Sharp) out of $500,000. Whoever wins gets to stay in the fictitious French Riviera town of Beaumont-sur-Mer to swindle tourists and gamblers out of their millions.

That’s where Hathaway’s Josephine Chesterfield has ruled exclusively and lived lavishly for years with the help of the police inspector (Ingrid Oliver), who protects her for a price. She aims high and takes posh fools for a bundle. But then Wilson’s brash Aussie (does Wilson play any other kind?) Penny Rust arrives to get in on the action. Penny’s schemes have been far more low-key with lower stakes, but when she sees the extraordinary wealth Josephine is enjoying, she insists on staying and learning from the master.

The plot doesn’t really matter here (although the script is credited to Jac Schaeffer as well as Stanley Shapiro, Paul Henning and Dale Launer, who wrote the original material). Unlike an “Ocean’s” movie, for example, the steadily building thrill of watching an audacious plan come together piece by piece is not the point. “The Hustle” is more scattershot. We are dropped into the middle of a scam as the ladies are approaching their latest target with whatever ridiculous costume, accent or backstory they’ve cooked up off-screen. The randomness of it all can be amusing, but it also makes us less invested in whether they’re able to pull it off. If the scam works, great. If not, it’s off to the next poor schlub.

When Josephine and Penny are feeling each other out and trying to one-up each other, it can be good for a laugh here and there. There’s a play on words involving a hotel suite that made me giggle. More often than not, their competition feels like a series of individual ideas—some of which work, some of which don’t—rather than a cohesive whole. Nowhere is this truer than in the training montage, as Josephine puts Penny through the paces as if she were preparing her for a future as a Navy SEAL. It’s funny, but it also makes zero sense.

Where “The Hustle” falters most is in the way it misses an opportunity to make an actual statement with its gender-flipped premise. The characters say they do what they do to get back at the men of the world who’ve exploited women for far too long. They’re simply taking what’s theirs, what’s long overdue. And they’re using traditional notions of idealized female sexuality to do it: Josephine as a sultry sexpot, Penny as the worried sister of a buxom blonde who’s allegedly in danger. But it’s a superficial point, and seemingly more of a chance for costume designer Emma Fryer to dress the striking and statuesque Hathaway in an array of gorgeous designs than anything else.

Hathaway and Wilson are certainly game for whatever comes their way—so much so that you’ll wish they’d been afforded the luxury of material with more bite. 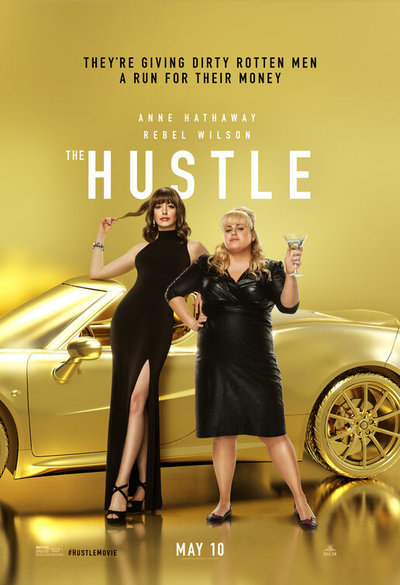 Rated PG-13 on appeal for crude sexual content and language.