This originally ran on March 13, and we are re-running because of its early VOD drop.

Craig Zobel’s “The Hunt” is filled with more memes than plot. The incendiary film, which caused much online handwringing last fall, was eventually shelved after the president weighed in with an uninformed opinion. Almost everybody’s opinion came sight unseen because few eyes had even watched “The Hunt” at all. No matter, after much sound and fury the movie is more of a molehill than a mountain. Betty Gilpin deserves better and so do we.

The film opens on a bombastic overture and a stiltedly staged group text that will retroactively become important. We are then whisked onto a luxury jet where the liberal rich are feted and random poor conservatives from different parts of the country have been drugged and tucked out-of-sight in the back of the plane. The next scene opens on the kidnapped victims waking up gagged and heading towards a mysterious box in a field, like the cornucopia from “The Hunger Games.” Once their restraints are off and the shooting begins, the most dangerous game’s afoot.

It’s easier to single out what I enjoyed about the movie before delving into its messy politics. There are a handful of thrilling, suspenseful sequences like the first shootout in the field and some hand-to-hand combat. Zobel leans into the exploitative possibilities of recreating Richard Connell’s The Most Dangerous Game for a new audience, including bloody boobytraps, a grenade thrown down a guy’s pants and many, many painful-looking splattery wounds from arrows, knives and bullets.

Standing tall and stern-faced in the middle of the violent squall is Crystal (Gilpin), the movie’s secret weapon and its saving grace. Hardly any of the other characters on either side of the liberal/conservative divide ever rise above a trite stereotype, and while there’s not too much more depth to Crystal, Gilpin’s performance as a reluctant warrior makes her kind of a hero. She plays Crystal with a tight-lipped and restrained presence, perhaps a holdover from tolerating rotten customers at her car rental agency job. Later, we learn she served in the military, and Gilpin embodies this moving rigidly but quickly, showing that some of her discipline has worn off over the years through a few nervous ticks. Still, her eyes remain on survival and never lets her guard down, like Rambo by way of Mississippi. For those of us who have watched her as Liberty Belle on Netflix’s “Glow,” she’s playing someone completely against type and it’s exhilarating to watch.

Apart from Gilpin, the movie falls apart. The villains in this story are liberal elites lead by a woman named Athena (Hilary Swank) who have a preposterous social media backstory fueled by a conspiracy theory known as Manorgate. It’s one of the many borrowed and tweaked headlines used in “The Hunt,” which despite all its copy and pasting of popular terms and internet slurs, doesn’t add up to anything beyond its superficial violence. Written by Nick Cuse and Damon Lindelof, “The Hunt” proves how “both-siderism” doesn’t always logically pan out. How could a pack of liberals easily upset by the sugar in soda, climate change and gendered language turn to kill for sport? Instead, the movie plays into the conspiracy fears about crisis actors and theories that rich liberal elites are out to kill them, and that is where things get less funny.

Zobel, Cuse and Lindelof made a movie to own the libs and the conservatives, which might be the most capitalist (or nihilist) attitude towards politics yet. The unoriginality of “The Hunt” extends to its cinematography, which Darran Tiernan paints with one shade of grey and maroon bloodstains, its unremarkable production design by Matthew Munn, and its stereotype-reaffirming wardrobe from costume designer David Tabbert. The movie is both disposable in its inability to say something—anything!—about the current political climate beyond “Oh, it’s dicey out there,” and as a strange cultural artifact of the times. It’s just as likely that this movie would have flown in and out of theaters without much notice were it not for its momentary blip on social media. Perhaps there’s more of a lesson to be learned from “The Hunt” than what happens in “The Hunt.” 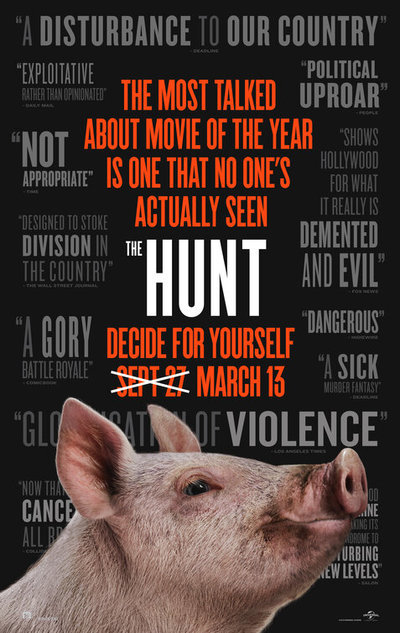 Rated R for strong bloody violence, and language throughout.