Nisha Ganatra’s “The High Note” is a movie with its heart in the right place and appeal to spare, but it doesn’t quite transcend its story’s predictable course. The film gets teasingly close to bringing up some hefty conversations about women in the music business, but in the end, those notes stay flat, playing more like a melody that doesn’t stick around for long.

In “The High Note,” Maggie (Dakota Johnson) works day and night to cater to every whim of legendary singer Grace Davis (Tracee Ellis Ross). Beyond her all-consuming role as a personal assistant, Maggie dreams of making the jump to working as a music producer, even going so far as to mixing some of Grace’s demos and pitching her own ideas of what her boss should do next with her career. Maggie’s ambitious plans rub some in Grace’s entourage the wrong way, like her manager Jack (Ice Cube) and mooching house-sitter Gail (June Diane Raphael), but she doesn’t stop there. She takes on a new up-and-coming singer named David (Kelvin Harrison Jr.) as a second client, hoping to prove she has what it takes to make him a star. Of course, nothing is ever so simple in showbiz.

Screenwriter Flora Greeson makes her feature debut with "The High Note," which feels a draft or two away from something more than a light workplace drama. Maggie’s Pollyanna-ish belief that hard work and sharing her opinions as an assistant will get her ahead feels too idealistic for someone who’s been working as an assistant for years. There’s something too cavalier in Maggie’s character, who at one point inserts herself into the studio to prove herself, knocking down a well-established male producer in the process. Jack scolds her for the outburst, but that could have meant the end of her gig. If she had been acting that way all this time, it’s likely she might not have made it this far in her career as a personal assistant. When did she stop playing the hierarchy game and try to level up? It’s a shame that Greeson’s story briefly approaches the subject of race and age, two major barriers for women like Grace, and I wished they were given more time to explore Grace’s feelings on the subject in more than just one line. But it’s easier for the character to wave away her underling instead of having a painful, perhaps necessary, exchange with the millennial go-getter who still believes showbusiness is a meritocracy.

Unsurprisingly enough, Ross runs away with “The High Note.” Her expressive reactions tell the audience so much about her character without explaining it. When Maggie confronts her after a disastrous meeting with record executives, Grace gives her an exasperated look that screams, “I know what you’re going to say, and I don’t what to talk about it.” Maggie presses on anyway because that’s her character, but Grace’s tired look doesn’t falter during their discussion. Likewise, when Grace decides Maggie is falling down on the job, her pivot to a demanding ice queen is a world away from the more understanding character open to giving her assistant the biggest chance of her career. It’s worth noting that Ganatra, Greeson and Ross never let Grace turn into a cliched diva trope, and instead make her the most interesting person to watch in the cast.

Unfortunately, perhaps in part to Maggie’s inconsistencies, Johnson’s performance is a bit uneven. There are moments when she resembles a tireless Mary Tyler Moore-like heroine, and then there are other moments when she seems to lose her character’s moxie, culminating in a mopey retreat back to her dad’s place on Catalina Island. The only way the movie shows that Maggie’s not as rich as everyone else around her are several jokes about her rusting old car, which feel like the story is skimming the surface of her hunger to get ahead. The stakes in general feel so relaxed, it’s as if the movie didn’t want to offend or bring anyone down. Harrison's David is one of many characters who seem to be kept at arms’ length from the story, all despite his charming presence and designation as a love interest.

While “The High Note” may not be the song of the summer, there’s plenty to enjoy in addition to Ross’ performance. Ganatra and her cinematographer Jason McCormick set an almost romantic tone for recording sessions that explain why the experience is everything Maggie wants. When she looks longingly at the Capitol Records building in Los Angeles or the portraits of legendary artists in its halls, we get a sense that she wants to be a part of that history, too. Listen closely enough and you can hear the difference in Amie Doherty’s pop songs and ballads between songs that might have been popular a few years ago, and what’s popular now as Maggie tries to direct Grace and David to their new sounds.

While its actual love story plays out like an afterthought, "The High Note" works more like a romantic comedy between two women who see a part of themselves in each other. Like a reversal of the “Working Girl” dynamic, where an ambitious upstart unseats her boss, the two women of “The High Note” end up learning how to work together and undo some old tropes in the process. 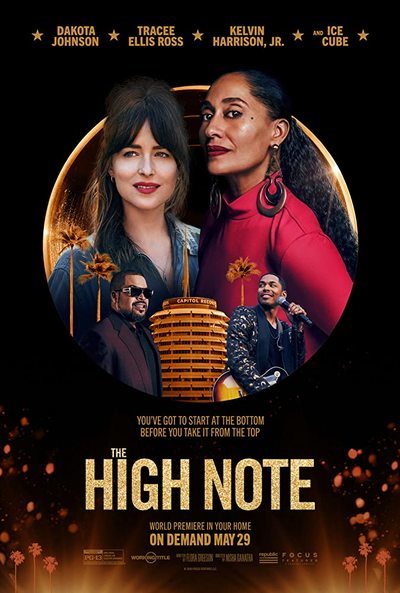 Rated PG-13 for some strong language, and suggestive references.