The Haunting of Sharon Tate

This August will mark 50 years since Charles Manson's followers went on their killing spree in Los Angeles, murdering eight people in a two-day period with such savagery it sent the entire nation into paroxysms of terror. It's not a surprise then that not one, but three, separate movies are coming out in 2019 "dealing with" the murders in some way. But the events in 1969 left such a scar, had such a deep cultural impact, that half a century later people still fear the story will be exploited or sensationalized. Quentin Tarantino's upcoming "Once Upon a Time in Hollywood" has already generated a lot of buzz and commentary (much of it negative, even though no one has seen it yet). It's worth it to remember that Debra Tate, Sharon Tate's sister and fierce advocate, has tweeted her support of Tarantino's project, after speaking with him personally about it. The other film is Mary Harron's "Charlie Says" (with Manson played by Matt Smith of "Doctor Who"), due for release in May, but first up is Daniel Farrands’ awful "The Haunting of Sharon Tate." Based on the premise that Tate prophesied her own death, Farrands uses the most notorious mass murder in the 20th century as an excuse to make a home-invasion thriller (and a pretty rote one at that), with no sense of time, place, or surrounding context. The film is appalling from start to finish.

In the opening scene, shot in black and white, Tate (Hilary Duff) shares with an interviewer that she has had a premonition of her own death. She sees it all: the strangers in her house, the knives, the rope, pleading for her life. Her monologue is interspersed with actual newsreel footage of the real Sharon Tate on her wedding day, and, worse, real footage of an interview with one of the murderers, Susan Atkins, real footage of the crime scene, the bodies being carried out of the house on that horrible morning. This is all terribly brazen and exploitive. When people have recoiled at the thought of the Manson murders being told in film, it's this kind of thing they're worried about.

The film then jumps one year ahead to the early days of August, 1969. Tate, now hugely pregnant, lives in her house in the hills, waiting for her husband to return from Europe. Friends Abigail Folger (Lydia Hearst) and Wojciech Frykowski (Pawel Szajda) have been staying with her, keeping her company, and Tate's old boyfriend Jay Sebring (Jonathan Bennett) is visiting as well. Tate is jumpy and agitated. She senses something is not right. She is suspicious that Abigail and Wojciech have been letting sketchy characters come to the house while she's gone. There's a man named "Charlie" who leaves packages filled with tapes of his music on the doorstep. Tate wonders if Abigail and Wojciech are plotting against her somehow. Farrands’ throwing shade on Folger and Frykowski, subtly blaming them for "bringing" Manson's people to the house that night, is despicable. They were murdered too, after all.

The characters have no personalities, no inner lives, no real relationship to one another. When they talk, they talk in the most heavy-handed way about fate, chance. Tate asks questions like, "Are we slaves to our destiny?" "Is life a random series of circumstances or is there some greater plan?" The dialogue (written by Farrands) is painful on the ears, stilted and theoretical. What's even more painful is that because Tate keeps dreaming of her death, we see the murders multiple times, in graphic knife-stabbing, blood-spattering detail. Tate's insomnia and sense of foreboding cause her to lose her grip on reality.  There are sequences which re-imagine the murderous events of August 8-9, with Tate taking charge of her own destiny, fighting back, gathering everyone together to resist the home invaders. In one version, she races out into the driveway just in time to save Steven Parent (Ryan Cargill) from being murdered, and the two of them team up to try to get a ham radio working to call for help, all as Tex Watson (Tyler Johnson), hellbent on murder, staggers through the yard looking for them. It's all very "thrilling."

In an insidious way, Farrands' approach—these alternate versions where Tate gets to act "heroically"blames the victim. It suggests: Couldn't Tate have shown more “agency” that night? What if she had fought back? Wouldn't it have been great if Sharon had been more "badass" in the face of her impending death? If only she had listened to her intuition, maybe she wouldn't have been murdered. Alternate histories can be extremely cathartic. But not like this.

I don't think there's any story that shouldn't be told. The Manson murders have been well-covered in pop culture, movies, documentaries, books; it's practically a cottage industry. But "The Haunting of Sharon Tate" uses the event, uses Sharon Tate's name, in a story that doesn't care about her at all, and doesn't respect what the Tate-LaBianca murders actually meant, their larger context, the California-ness of it all, the 1969-ness of it all. It's the essence of exploitation: Home-invasion thrillers are a dime a dozen, but if you put Sharon Tate's name on it, maybe it'll seem like you're actually doing something "serious."

There were many "final" straws for me along the way, but the use of "Cease to Exist" on the soundtrack—a song written and sung by Charles Manson—is unforgivable. 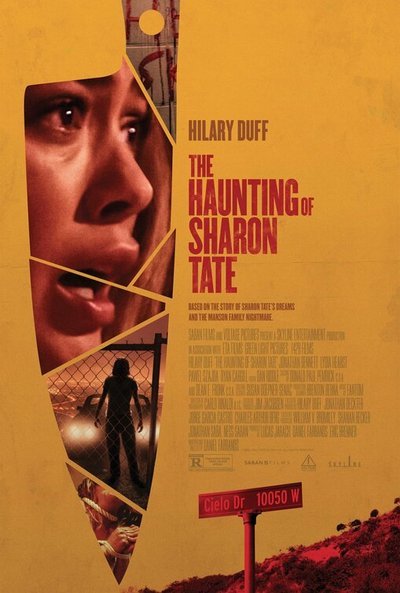 Rated R for strong bloody violence, terror, and some language.