In 1885, Oscar Wilde wrote in a letter to his friend James Whistler, "Be warned in time, James; and remain, as I do, incomprehensible: to be great is to be misunderstood." Wilde could not have known how tragically true those words would be a mere decade later. After his highly publicized trial in 1895, Wilde was convicted of "gross indecency" and sentenced to two years' hard labor. Most of his friends deserted him. Upon his release in 1897, his health ruined, he went into exile in France and died three years later, nearly friendless and destitute. He was only 46 years old. (Wilde was posthumously pardoned—along with 50,000 other men—in 2017.) "The Happy Prince," written, directed, and starring Rupert Everett, tells of Wilde's final 3 years, his isolation, his health issues, his increasing despondence. This is Everett's first film as a director, and there are times when it shows. But what he brings to the table—as a director, writer, and actor—is his intuitive "take" on Oscar Wilde and the performance alone makes this riveting and revelatory viewing.

In an early scene, Wilde lounges in a grubby Parisian bed, staring with post-coital appreciation at the naked teenage prostitute standing by the window. Wilde moans, almost rapturously, "Our purple hours are sullied by green notes." The boy smiles over at Wilde, accepting the older man's gaze without judgment. Everett's tone is partly regretful about the "green notes" and the "sullying", but there's a sharp note of relish in it, too. Maybe "purple hours" are best when backgrounded by squalor. It's an extraordinarily textured moment, one of many in the film: it opens up its mysteries the longer you think about it.

"The Happy Prince" ricochets around in time and styles. There are moments when it's hard to tell where you are in the timeline. Is it a flashback? Is this London or Paris? There are static scenes of almost painterly beauty (John Conroy's cinematography deserves much credit), but then there are handheld-camera sequences where you can barely tell what is going on. The framing device of Wilde telling his sons a bedtime story isn't used consistently enough and you keep losing the thread of the story being told.

What is essential, though, are the emotional insights about Wilde which Everett brings to the table. Everett knows his Wilde very well. He was wonderfully bitchy as Lord Alfred Goring in 1999's "An Ideal Husband" (where he spoke Wilde's dialogue effortlessly, not an easy feat), and he also played Wilde in the 2012 revival of David Hare's play The Judas Kiss (for which he was nominated for the Olivier Award for Best Actor). He brings all of that experience to bear in "The Happy Prince." When the film opens, Wilde is already ruined, skulking through the alleys of Paris' underworld, running up huge bar tabs which he can't pay. He looks completely unwell, bloated and sweaty, cheeks smeared with rouge.  His eyes are haunted, flitting around looking for somewhere safe to land. He is rescued by two of the only people who remained loyal to him after his fall, Robbie Ross (Edwin Thomas), executor of Wilde's estate, and Reggie Turner (Colin Firth), a holdover from Wilde's "aesthete" crowd. The two men set him up with lodgings in France, give him money, and do damage control when necessary (it is often necessary).

Wilde tries for a reconciliation with his wife Constance (Emily Watson). He misses his sons (the film opens with Wilde, resplendent in a red velvet suit, telling the two sleepy boys a bedtime story). Whatever Constance's humiliations as a wife might be, Wilde was a good and loving father, and Watson—in her few scenes—conveys that unbearable tension. But it's too late to go back, really, and so—ignoring the outraged cries of Robbie and Reggie—Wilde starts up again with Alfred "Bosie" Douglas (Colin Morgan), the young man who brought about Wilde's ruination in 1895. The story of Lord Alfred Douglas and his wretched father, the 9th Marquess of Queensberry, could fill a 2-season television series, but suffice it to say that "Bosie" egging Wilde on to sue the Marquess for libel doesn't exactly reek of "the love that dare not speak its name" but "What a perfect way to stick it to dear old Dad." Everett's script does not soft pedal this, nor does it romanticize the affair. Morgan, looking like a Dante Gabriel Rossetti painting come to life. is perfectly cast as Bosie.  You take one look at him, at the icy look in his blue eyes beneath his blonde curls, and you want to tell Wilde to run as fast as he can in the other direction.

But Wilde didn't run. Or he did, but he ran towards Bosie, and Everett shows us why. This understanding is key to the film's often excruciating power. Everett brings to the performance his knowledge of how the centuries-long closet formed gay male companionship and love, how language was filled with supersonic signals for its intended audience, something Wilde himself brought to its pinnacle in his plays, stories and epigrams. As Wilde gets sucked back into Bosie's melodrama, having orgies in a rat-infested mansion in Italy, you feel the ship sailing—Wilde's ship—towards the rocks. The young party boys will drop him the second he runs out of money, just like most of his friends dropped him after the trial.

While in prison, Wilde wrote an extraordinary and now famous letter to Bosie, called "De Profundis." 20 pages long, it's difficult reading because Wilde's anguish is so palpable. At one point, he shares with Bosie:

"For the first year of my imprisonment I did nothing else, and can remember doing nothing else, but wring my hands in impotent despair, and say, ‘What an ending, what an appalling ending!’ Now I try to say to myself, and sometimes when I am not torturing myself do really and sincerely say, ‘What a beginning, what a wonderful beginning!’ It may really be so. It may become so."

Tragically, it wouldn't. Wilde's release was not a "wonderful beginning." It was the beginning of the end. Clunky structure and awkward scene transitions aside, "The Happy Prince" swims around in a charged space where despair and hope exist simultaneously. The two may even be synonymous. This is due almost entirely to Everett's performance of a devastated man, plagued by guilt and self-loathing, cavorting with naked Italian boys, haunted by visions of Constance and his lost sons, his literary life—his whole life—over. Everett's approach is unblinking. "The Happy Prince" is painful to watch, but filled with insight, complexity and understanding. 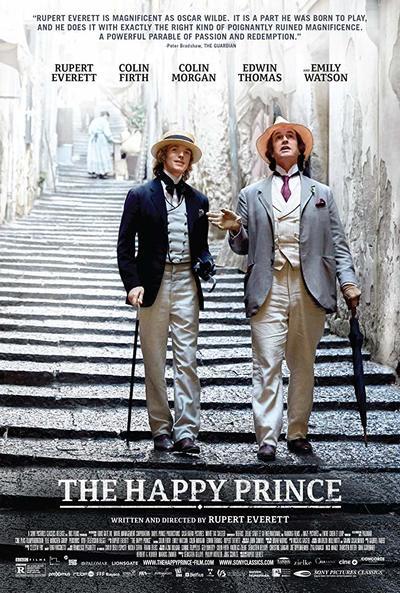