Like almost all of my favorite films, “The Great Santini” is about people more than it's about a story. It's a study of several characters, most unforgettably the Great Santini himself, played by Robert Duvall. Despite his name, he is not a magician or an acrobat but a lieutenant colonel in the Marines with the real name of Bull Meechum. He sees himself as the Great Santini, an ace pilot, great Marine, heroic husband and father and, in general, a sterling man among men. His family is expected to go along with this_and to go along with him, as he's transferred to a duty camp in South Carolina in the early 1960s.

There are five other members of the Meechum family. His wife (Blythe Danner) is a sweet Southern girl who calls her kids "sugar" and understands her maverick husband with a love that is deep but unforgiving. His oldest son (Michael O'Keefe) is just turning eighteen and learning to stand up to a father who issues "direct orders," calls everyone "sports fan," and expects to be called "sir." There are two daughters and one more son, but the movie's main relationship is between the father and the oldest boy.

Santini, you understand, is one hell of a guy. All he understands is competition. He's a royal pain in the ass to his Marine superiors, because he's always pulling damn fool stunts and making a spectacle out of himself. But he's a great pilot and he's said to be a good leader (even though his first briefing session for the men under him in South Carolina leaves them totally bewildered). Santini wants to win at everything, even backyard basketball with his son.

But the son is learning to be his own man. And there's a subplot involving a friendship between O'Keefe and the intense actor Stan Shaw, who plays the son of the family's black maid. Marine kids grow up nowhere and everywhere, we learn, and in South Carolina these two kids go shrimping together, trade lore together, become friends. It's a nice relationship, although a little tangential to the main thrust of the movie.

It's Robert Duvall who really makes the movie live. Duvall and Blythe Danner in a stunning performance that nothing she's done before (in “1776,” “Hearts of the West,” etc.) prepares us for. Although “The Great Santini” is set about ten years before “Apocalypse Now,” Duvall is playing essentially the same character in both films, we remember his great scene in “Apocalypse,” shouting that napalm smells to him like victory, as he gives his gung-ho speeches in this movie.

Duvall and O'Keefe go hard at each other, in the father-son confrontation, and there's an especially painful scene where the father bounces a basketball off his son's head, egging him on. But this movie is essentially a comedy, a serious, tender one, like “Breaking Away,” which is also about a son getting to know his father.

There are wonderful little moments in the dialogue (as when the Great Santini's daughter wonders aloud if females are allowed full Meechum family status, or are only sort of one-celled Meechums). There are moments straight out of left field, as when Duvall and the family's new maid (the formidable Theresa Merritt) get into an impromptu shoulder-punching contest. There are moments so unpredictable and yet so natural they feel just like the spontaneity of life itself. And the movie's conclusion is the same way: sentimental without being corny, a tearjerker with dignity.

“The Great Santini” is a movie to seek out and to treasure. 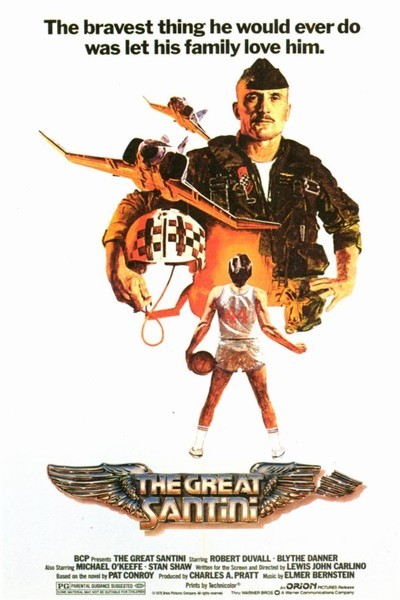