I hesitate to call "The Greasy Strangler" a horror-comedy because it's more surreal than humorous. The key distinction between humor and surreality is whether or not a joke is played for laughs. Many of the gags in "The Greasy Strangler" aren't really funny, but rather repulsive, confusing and annoying. That's not a knock, but rather an observation. This is, after all, a film where a disco-obsessed older man (who looks like a spray-tanned Spalding Grey wearing a Beethoven wig) competes with his pathetically nebbish son (thinning hair, clunky grandma glasses, ugly turtlenecks, prominent gut) to win the affection of the only woman deluded enough to be interested in them both (frizzy Lucille Ball-style red wig, squat, overweight). Oh, and the father's the murderous, grease-obsessed title character, and he frequently lets his penis (it looks like a dehydrated tuber with an angry red tip) hang out for no apparent reason. Is any of this funny? Sometimes, though not often. Is that intentional? Well, that's debatable. Is it worth seeing? Yes, but only if you enjoy being grossed out.

The best way to pin down a movie as elusive as "The Greasy Strangler" is to start by describing its pointedly inane, frequently repetitive, and (sometimes) productively weird plot. Big Ronnie (Michael St. Michaels) allows his son Big Brayden (Sky Elobar) to live with him on the condition that he cooks greasy food for him. Brayden thinks nothing of this, though his dad frequently objects to how "dry" his food is. The two run a lame disco-centric walking tour, where Ronnie, a pathological liar, tells tall tales about historic moments involving disco groups like the Bee Gees and Earth, Wind & Fire. Brayden meets Janet (Elizabeth De Razzo) on one of these tours, and instantly falls for her. This bothers Ronnie because Ronnie is a creep, and he doesn't want to be separated from his son. So Ronnie tries to break Janet and Brayden up by seducing Janet. Sounds normal enough, right?

Did I mention that Ronnie goes out at night covered in olive-colored grease and murders people while cartoonish neo-New-Wave-style synthesizer music blats out a beat? He goes on a tear, killing civilians, like the Indian tourist (Sam Dissanayake) whose only distinguishing characteristic is his tendency towards verbal diarrhea. Then he cleans himself in a car wash run by blind Big Paul (Gil Gex). And then he starts his day over with Brayden. Dialogue is often performed in a deliberately stilted manner, so a typical sentence like "I've been making my own olive oil in my bedroom, extra virgin" inexplicably becomes four inter-related sentences. Nudity is frequent, and often more bizarre than titillating, like when Ronnie imagines Janet walking down the street naked (save for a pair of heels) while walking a dog. And humor often boils down to dead air and variations on scatological running jokes, like all of the shouting matches between Ronnie and Brayden that devolve into them yelling "bullshit artist" at each other.

The charms of "The Greasy Strangler," such as they are, are only interesting if you like weird movies that rub their weirdness in your face. The film's conclusion puts the rest of it into focus, particularly a dream-like sequence where Brayden and Ronnie observe doppelgänger versions of themselves being shot by hunters. It's a weirdly liberating moment, because now that they (or versions of them) are dead, these characters are free to be as disgusting and feral as they want to be. That's the movie in a nutshell, a weird exploration of the limits of bad taste that sometimes tells funny jokes, but often just tests your patience (and usually deliberately).

I can't strongly recommend "The Greasy Strangler" for this reason, but I can tell you that its creators are occasionally so inspired that I found much of the rest of the film intriguing. Each frame of the film is hyper-composed to the point of warranting comparisons to panels in a comic book. This is funny unto itself since your eye can't help but gravitate towards grotesque objects within the frame, like the see-through window in Ronnie's purple crotchless jumpsuit, or De Razzo's rear when she squeezes her cheeks together while bellowing "Hooty tooty disco cutie! Hooty tooty disco cutie!" And who could resist the scene where Ronnie randomly starts dancing by himself after a floodlight turns on him, and he begins shuffling down the street as if he were a decrepit version of Michael Jackson in the "Billy Jean" music video? There should be way more scenes where that came from, but I'm still gobsmacked over the ones we got.

At this point, I confess that I probably like "The Greasy Strangler" more than I care to admit even to myself. It's a strange film that only gets stranger the more you think about it. Just describe a scene aloud, and you'll find yourself flummoxed by how vividly upsetting it is. I won't see another movie like it this year, that's for sure. 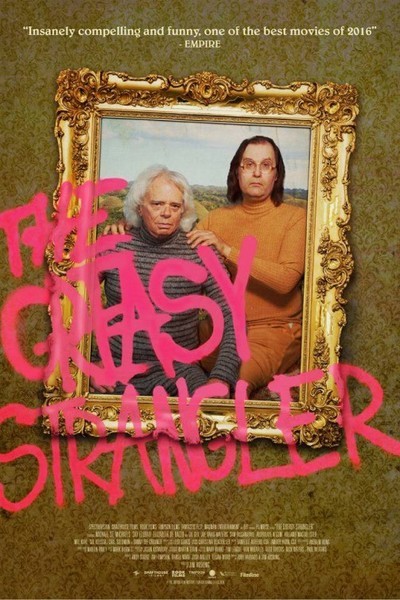