Fatih Akin’s controversial “The Golden Glove” is a bleak, depressing attempt to remove all glorification or justification from the serial killer subgenre. There are a few fleeting references to its protagonist’s family, but Akin is clearly trying to strip away the common driving force of serial killer movies that attempts to “explain” the mind of a maniac, or even paint them as some sort of troubled genius. And they have just as often been accused of romanticizing or glorifying that which is truly depraved, vile, and nauseating. With all of the artifice stripped away from the true story of Franz Honka, we are left with the nihilistic brutality of a monster, although even this starts to feel like a form of stylized provocation. It’s as if the award-winning filmmaker is challenging viewers to really see what murder and violence look like in a manner that feels like intellectual superiority. Most true crime fans know that the real stories that have enraptured them in film and television are much crueler and grosser than their fictionalized counterpart. If Akin’s goal is merely to pull away that curtain, it ultimately feels like a hollow unveiling.

Akin adapts Heinz Strunk’s 2016 book, which told the true story of a German serial killer from the early ‘70s named Fritz Honka. A modicum of internet research reveals that Akin’s film deviates a great deal from the reported true story of Honka, which is itself an interesting fact if you buy into the theory that Akin is merely trying to present the true horrors of a psychopath. Clearly, artistic choices were made by him (and/or Strunk) in altering history, so the idea that “The Golden Glove” is some sort of groundbreaking example of “the way it really is” kind of falls apart.

Jonas Dassler plays Honka complete with a heavy make-up job and what looks like a sheen of grime and sweat. You can almost smell him. Akin and his team do their best work in the bar that gives the film its title, a haven for outcasts and reprobates where people barely notice someone as unsettling as Honka. He spends most of his days there before retiring to an attic apartment, which is wallpapered with photos of naked women and littered with rotting food and empty liquor bottles. He is drunk more often than not, and, oh yeah, the opening scene of the film features him sawing off the head of a naked, dead woman.

While that brutality is mostly out of frame, it is a clear gauntlet being thrown by Akin in the film’s prologue. This is going to be ugly and nauseating. Future murders are more often directly in frame, including when Honka bashes a woman’s head into a table or strangles the life out of another. In between, he goes to the bar, rants about not getting laid, and becomes obsessed with a local girl. Did I mention that he dismembers his victims and puts their body parts in a space between his wall and the roof? “The Golden Glove” would make the protagonist from Lars von Trier’s “The House That Jack Built” turn away.

The question you’re probably asking is “What’s the point?” A red light district bar in Germany in the early ‘70s is naturally going to be fertile ground to look at an economically struggling class not far removed from the horror of World War II, and it feels like there’s commentary about how people this far down the social ladder can coexist with a monster without even noticing he’s sitting next to them. Honka takes women home from The Golden Glove and they never return, and no one seems to notice. This is not a film with a counterpart officer "good guy" who is going to save the day. There’s no one out there stopping these people or caring about the ones who are being murdered.

However, even digging that deep into the themes of “The Golden Glove” feels like it may be missing Akin’s bigger point, which is that there isn’t one. Murder is so often used as a commentary by screenwriters that we've admittedly lost some of the truth of its pointless brutality on the big and small screen. Once you realize that Akin is going to hold nothing back, “The Golden Glove” becomes an artless, flat affair. And Akin and the film’s fans are kidding themselves if they think the lack of sensationalism isn’t a style choice in and of itself.

“The Golden Glove” is technically sound as the director uses many of the same people he did on films like “Head-On” and “The Edge of Heaven.” Whereas those were more flashier affairs, Akin and his team often use a static camera, placing us in Honka’s sweaty existence as if we were one of the many flies on his wall. There’s more to admire here in terms of filmmaking skill than the movie's incredibly harsh critics had me believing after Berlin. Although perhaps less to admire than Akin thinks. 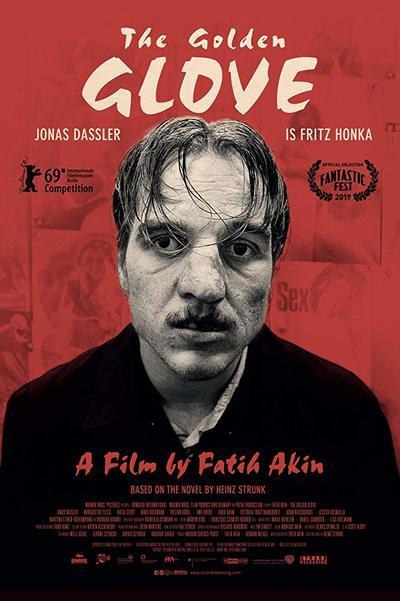