"Every other time I've been to a lesbian hooker, they've accepted Talbot's gift certificates," a baffled elderly client says to the lesbian hooker who just serviced her. The lesbian hooker is new to the job, a sloppy dresser, asthmatic and naive, but she knows that she doesn't want a Talbot's card, she needs the cash. The ongoing joke that lesbian hookers in New York City congregate outside of Talbot's because that's where the real action is is the funniest part of "The Foxy Merkins," a lesbian spin on the male-hustler genre, directed by Madeleine Olnek. It's a one-joke movie, written by Olnek with Lisa Haas and Jackie Monahan (who both star), and while much of it is quite funny, the film ends up feeling like a good comedy sketch stretched out unnecessarily to a feature-length.

Margaret (Lisa Haas) is new to being a hooker. She dresses "like a homeless women's studies major," observes Jo (Jackie Monahan), another hooker who has taken Margaret under her wing. Jo wears cute outfits and huge sunglasses, grew up rich, and is far more successful at working the streets than Margaret. In one funny scene, the two women walk down the sidewalk, Jo drawling in a bored monotone at everybody they pass, "See that girl in the peach outfit? Slept with her … Girl in the boots over there? Slept with her…." The two of them sleep in the Port Authority bus station, stashing their clothes under the sink and a bottle of tequila behind one of the toilets. By day, they stalk the streets and hang around outside of Talbot's with all the other hookers, ogling the uptown matrons on their way in and out of the store. Sometimes they score.

Margaret's efforts to sell her body for cash are bumbling and awkward, and sometimes painfully funny. Jo drawls bored advice at her protege: "You are the kind of lesbian that the client will be mortified to be seen with, so they'll pay extra." Margaret nods, saying, "Uh-huh." There is a long unfunny sequence where Margaret keeps getting busted at the same hotel by two cops who barge in with guns. It's meant to be slapstick, it's meant to be Keystone Cops, but it's strangely airless, lacking the manic propulsion that could push the events into true screwball.

There are a lot of callbacks to male hustler movies: Jo has an "I'm walkin' here!" moment reminiscent of Dustin Hoffman's famous scene in "Midnight Cowboy." There's a quiet heartfelt scene over a campfire, where Margaret expresses her romantic feelings for Jo, a nod to a similar sequence in "My Own Private Idaho." But "The Foxy Merkins" suffers by comparison. When the film steps into more sentimental waters (Margaret searching for her mother, the pain of abandonment), it's a total stretch. The film can't take it. It's too slight. Both actresses are game, and watching their scenes together is a delight (Monahan is a deadpan queen), but the story rests on some pretty flimsy architecture.

Early in the film, there are "interviews" with various lesbian hookers, who talk directly to the camera about what got them into it, what it was like for them. They share funny or weird anecdotes. These hookers are all played by actresses, but the documentary-energy is genuine, and these scenes have real interest, real humor. The fake-interview device is dropped early on (although it does return at the very end), and its disappearance is a mistake. The fake interviews focus "The Foxy Merkins," interrupting the adventures of Jo and Margaret, reminding us that none of it should be taken too seriously.

Olnek directed 2011's hilariously weird "Codependent Lesbian Space Alien Seeks Same" (also with Haas and Monahan in the cast). That film was a wacky black-and-white comedy depicting a yearning lesbian who is contacted by an equally yearning, totally bald lesbian alien. Confident in its tone and style from the first frame, calling to mind the films of Ed Wood, "Codependent Lesbian Space Alien Seeks Same" was fresh, funny, and truly bizarre. "The Foxy Merkins" keeps the comedy ball rolling along, thanks in part to the two talented actresses in the lead roles, but there's just not much else there. 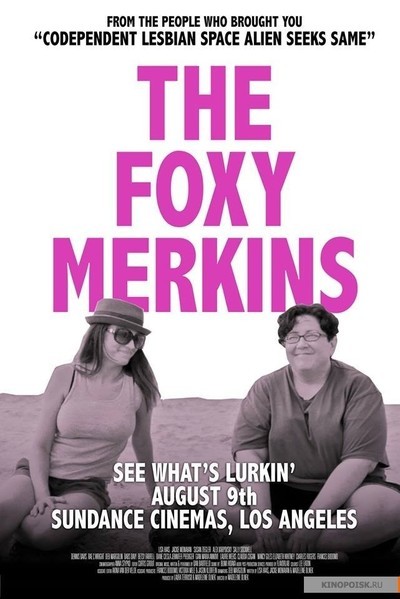