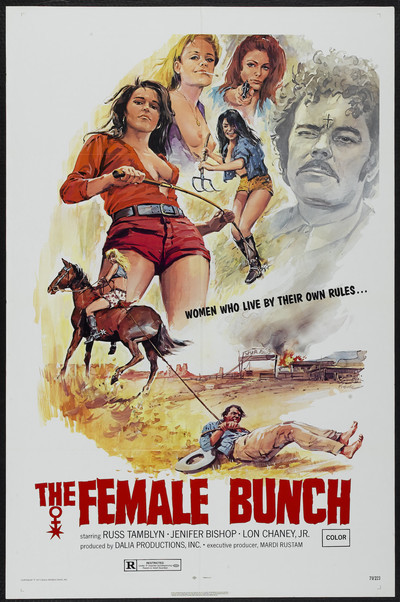 There's no level at which "The Female Bunch" is any good. But I suppose some notes should be set down for the record; history will record it as the last movie booked into the Oriental Theater. The wreckers dismantle the Stock Exchange, and the Oriental ends its policy of movie exhibition with "The Female Bunch;" there is a lesson here somewhere, I guess.

Apart from anything else, "The Female Bunch" is a useful document for anyone studying the decline and fall of the mindless sex object. It is a movie about women who hate men. They hate them, according to one flashback, because men are beasts who love them and leave them, or at least break dates with them. That is indeed shameful, but the reaction of the women in the picture is perhaps extreme.

They have banded together on a hidden ranch that is off limits to all men, except for an alcoholic old codger who tends the horses. The women on the ranch have apparently made a careful study of sadomasochistic pornography, and they wear boots, carry whips and pose towering over the camera. New girls on the ranch are initiated by being buried alive for 10 seconds in a flimsy coffin, which is less trouble than it used to be to get into a good fraternity. The plot has something to do with how the girls ride over the Mexican border, engage in drunken orgies and smuggle in heroin.

Their behavior on the Mexican side of the border is regrettably lax. Here are all these tough dames in leather, burying each other alive and cracking whips and the minute they scent tequila they go ape. They bound into this Mexican bar like a secretarial pool into Butch McGuire's, and in five minutes they're draped over the laps of every guy in the place, and two of them are being seduced in the sawdust on the floor. If this seems like loose behavior for sadomasochistic men-haters, you may be right; even the barroom chippies in the old Westerns had better manners.

The problem may be in the casting. The actresses tend toward would-be sex symbols, retired go-go dancers, sometime Las Vegas cocktail waitresses, and so on: Their whole early training has been in mindless sex-objectivism, and they just look silly on horseback. In one scene, a girl is sitting on a fence just kind of idly cracking her whip, and another girl tools up in a convertible. Do they snarl? Spit? Trade commands? No, they smile, and one says: "Sally! Long time no see!"