“The Feast” is a strange movie, even in terms of how to recommend it. There are endless horror movies out there in which a slow burn seems like it's just killing time before it's actually time to kill. But "The Feast" does well with that dread—it's the main course that proves to be the rip-off, however gory, indulgent, and horror-ready it is. Like I said, strange.

This Welsh-language film is directed by Lee Haven Jones, who works with cinematographer Bjørn Ståle Bratberg to create a thick, impressive mood out of the typical horror location of “isolated modern home owned by rich people.” The script by Roger Williams more or less follows a mother and wife named Glenda (Nia Roberts) as she tries to throw a small but fancy dinner party, with the help of a spacey assistant, and our surrogate into this world, Cadi (Annes Elwy). The family is its own stew of conflict, involving her substance-addicted son Guto (Steffan Cennydd) and her body image-addicted other son Gweirydd (Sion Alun Davies); their wealth does not seem to have made them healthier or more loving. And yet it's dinner night, time to show off the fancy paintings and the rabbit meat acquired by hunter husband/father Gwyn (Julian Lewis Jones) with some family friends who have their own business to discuss.

You could readily boil this down to a short, but it’s how the filmmakers shoot this little world that helps numerous observant passages suck us in. The hosting home for the evening is painted with finite details, like gorgeously framed shots of the landscape, and the blue-purple sunsets that surround it; notes of how serene this place can be. But when the camera is inside the home, it tiptoes down barren hallways, creating an air of unease.

Part of that unease also comes from how Jones constantly draws your eye with where characters are placed and how they are framed. Some of the film's best, most intriguing pre-dinner scenes make you attentive to what’s going on in the background around these characters as much as in the civil foreground. No character benefits more from this than Cadi. She does not say much, but she seems to see everything from a distance, like how Gweirydd shaves himself naked in the bathroom and gets a drop of blood in the tub, or how Gwyn suffers headaches that the sound design treats like a broken radio signal. Cadi richly occupies the negative space of this stark, unsettling environment, something of an alien hired to set the table (she gets dirt on the white cloth) and cook the food. She is such a passive force, even when she is just standing out of focus in the back of a shot, that we become even more active as viewers.

The spell of these passages in “The Feast” is so thick that it almost doesn’t matter that we care about the characters and their well-being as much as we do the silverware. (Almost.) There’s just enough details that are planted about these eccentricities, and these family dynamics. Meanwhile the script’s sporadic, gross-out moments of food horror—involving spit, hair, raw meat—create a more claustrophobic experience than whatever master scheme is about to be unleashed.

But eventually “The Feast” proves to be guilty of overplaying its hand. We should have seen it coming, with how it’s broken into chapter titles that simply borrow from upcoming dialogue, and given a cheap, pre-dinner clip-show that's presented as a Cadi hallucination that tells us blood is nigh, like an unconfident producer’s suggestion worried about restless moviegoers. The last 20 minutes or so of "The Feast" become dreamy gibberish, unleashing violence that loses the formidable tone, shifting from austere modern horror to Wayne Berwick's “Microwave Massacre” on a dime, leaving one's earlier enthusiasm to cling to the style while everything falls apart. It turns out that the disorienting filmmaking has more to say than the story, but at least we can thank this film's wacky explosion of an ending for its earlier slow burn. 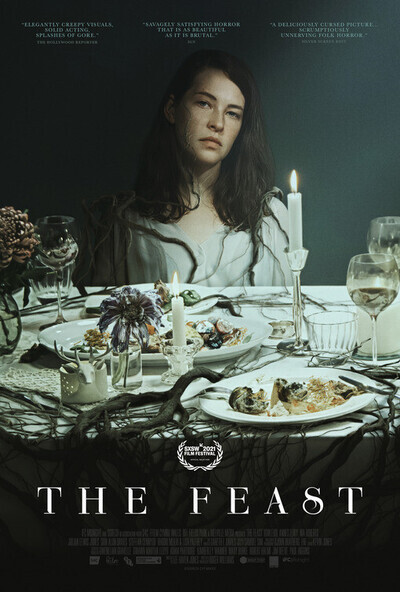