“The Farewell” announces at the beginning that it’s “based on an actual lie,” but the meaningful truths it reveals couldn’t be more poignant or powerful. And while writer/director Lulu Wang’s film is obviously personal and culturally specific, it achieves a universality and a resonance through its vivid depiction of a family in the midst of crisis.

That crisis was actually Wang’s crisis: Her beloved grandmother was dying in China, and the family decided not to tell their matriarch to protect her and prevent her from living in fear throughout her remaining days. Instead, they planned a lavish wedding as an excuse to bring everyone together one last time.

Wang took this story of devotion and well-intentioned deception and turned it into “The Farewell,” a film that’s deeply moving and unexpectedly playful in equal measure. And it’s blessed with several strong female performances, led by rapper and actress Awkwafina (a.k.a. Nora Lum), who serves as Wang’s stand-in and our conduit as the voice of reason. At least, that’s what her character, the Americanized Billi, thinks she is when she returns to her home country. Awkwafina was cast before her scene-stealing, star-making supporting turns in the comedies “Ocean’s 8” and “Crazy Rich Asians” and it’s thrilling to see her previously untapped, formidable dramatic abilities on display in a lead role. She’s such a natural that she maintains that magnetic screen presence and appealing edge even within this more somber setting.

As Billi and her stunned parents (Tzi Ma and Diana Lin, both lovely) process the devastating news about her dad’s mother and make plans to travel back to China for her cousin’s hastily announced wedding, she’s shocked by the massive lie everyone is prepared to tell. (Apparently, this is not an uncommon practice in dealing with the impending death of a loved one.) It’s telling that Billi’s parents actually don’t want her to join them at first, they’re so concerned that her emotions for this woman she loves dearly will bubble to the surface and betray their ruse. At the same time, we see early on that Billi can be a cool liar herself about minor details in her daily life, and concocting stories should come naturally to her as an aspiring writer in New York—fascinating contradictions, all. Wang says so much about the dynamic between Billi and her parents—and about their dynamic with each other as husband as wife—through subtle glances and body language, through what they don’t say out loud.

It’s here that Wang explores cultural differences between East and West and between generations without judgment or pronouncement as to whose approach is best. It’s as if she wants to see all sides of the delicate argument with a kind heart and an open mind. Her approach is so intimate and so no-nonsense, she makes you feel as if you’ve been immersed in this town, this family, this life. And you may even find yourself changing your mind over the course of the film as to how you’d handle such a dilemma yourself.

The way Wang mines surreal humor from seemingly sorrowful situations is disarming over and over again, whether it’s at a tacky, elaborate photo shoot for the bride and groom or at the wedding reception itself with its silly dances and rambling, drunken toasts. But the most frequent source of laughs (and, eventually, tears) is the firecracker at the film’s center: Nai Nai herself, played with sprightly charisma and plenty of zingers by Zhao Shuzhen. Despite her ailment and her advanced age, Nai Nai is a total hoot and allows nothing to get past her, from the wedding banquet menu to the shape of Billi’s butt now that she’s a grown woman. She can be brutally candid but her observations and advice always come from a place of love. Nowhere is that clearer than in the deep affection she shares with Billi, which is evident through the warm and sparky chemistry Zhao and Awkwafina enjoy. If you have a grandmother like this in your life, you’ll frequently find a smile of recognition spreading across your face; if you don’t have one, you’ll want one. Either way, bring tissues, because as delightful as Zhou is in this crucial, central role, she will also quietly rip your heart out by the film’s end.

In sharing her story with us, Wang achieves a masterful tonal balance throughout “The Farewell.” She’s made a film about death that’s light on its feet and never mawkish. She’s told a story about cultural clashes without ever leaning on wacky stereotypes or lazy clichés. She finds a variety of moments for her actors to shine within a large ensemble cast. And she’s pulled off one of the most perfect endings you’ll ever see. The entire film is pretty perfect, actually, and it’s one of the year’s best. 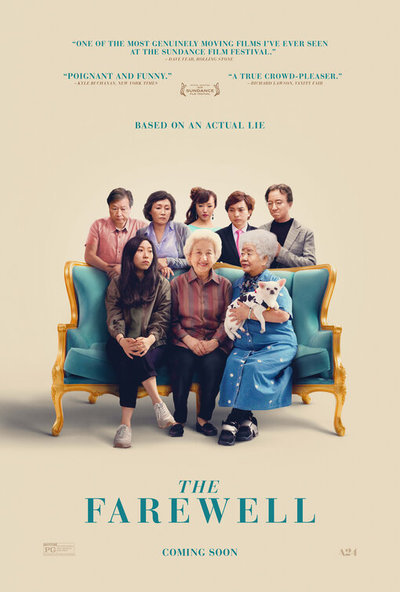