War is hell on white guys in “The East,” a Dutch psychological thriller set in Indonesia during that country’s post-WWII War of Independence. One Dutch soldier is given special consideration here, though he’s often let off the hook before his actions have meaningful consequences.

Johan De Vries Jr. (Martijn Lakemeier) is presented as a Byronic and very fair-skinned man in crisis. He has a dark past that he tries and fails to hide from his fellow soldiers: his father Johan Sr. (Reinout Bussemaker) was a high-ranking member of the National Socialist Movement, the Dutch Nazi party. Now Johan Jr. tries, in his way, to not only atone for his father’s sins, but to also lose himself in a foreign country where almost nobody knows his surname. Eventually, Johan Jr. stops feeling bad for himself, and starts emulating Raymond Westerling (Marwan Kenzari), a chilly, sadistic commanding officer who teaches Johan that sometimes, torture is actually a good thing.

"The East" is essentially divided into two halves, and neither is more illuminating than the other. First Johan Jr. struggles to find satisfaction and pleasure as a soldier. He is predictably frustrated in this goal, being surrounded by obviously bigoted colleagues and fearful natives. After a prolonged, frustrating tryst with local prostitute Gita (Denise Aznam), Johan then falls in with Raymond’s fascistic crew. This is Johan Jr.’s self-flagellating two-fold path to freedom (for himself); it’s sensational enough to be unpleasant, but never really thoughtful or particularly deep.

Writer/director Jim Taihuttu and co-writer Mustafa Duygulu imagine Johan Jr.’s tour of duty as a conventional descent into a very macho hell. Their version of Johan Jr.—who, by the way, is based on a real person—isn’t wanted at home, as we see in a Netherlands-set scene where Johan Jr. begs (unsuccessfully) for his old desk job, the one he lost when he went to Indonesia.

Johan Jr. is also surrounded by Dutchmen who not only don’t respect Indonesians as people—“Jungle bunny” is one of a few slurs used by supporting characters in the movie—but also don’t believe that the Indonesians can govern themselves. One Dutch officer notes that, “We’re fighting peasants with swords and spears. The idea that these peasants could run their own country is the only thing we can shoot down.”

Later on, Johan Jr. becomes seduced by terroristic murder- and torture-heavy tactics—“the only way to destroy terror is with more terror”—and then inevitably disillusioned once it becomes clear that his actions have negative consequences (for the native Indonesians): “People here really don't like Christians. They'll come after us when you're gone.” In this way, Johan Jr.’s story is re-imagined as a tidy, and easy to dismiss post-colonial allegory about an emblematically toxic man who, by movie's end, realizes that his ambiguously motivated actions are actually bad: “Whatever is happening here is not what I signed up for.”

Rather than engage with Johan Jr.’s ugly behavior, Taihuttu and Duygulu focus on the establishing details that, in the character’s eyes, make Indonesia the perfect exotic background for his private crisis. That wouldn’t be so underwhelming if this weren't essentially the same narrative that most post-“Apocalypse Now” filmmakers have recycled since the 1970s. But unlike that earlier movie, “The East” features more indulgence than criticism of the chauvinistic mentality that leads men to think that they can use others as a mirror for their own problems.

Gita reminds Johan Jr. that he is a tourist, though her feelings for him are mostly confined to Aznam’s reserved, but responsive body language. But Indonesia is otherwise presented as a land of meek victims—some of whom won’t speak to Johan Jr. for fear of being punished later by corrupt local authorities—and funny (ie: strange) opportunists. There’s the leering pimp who brings Johan Jr. and his men to the brothel where he meets Gita; the pimp chases away a couple of prostitutes who compete for the soldiers’ business. Johan Jr. is also served some roast monkey early on. “It’s like pork, you should try it.”

All of these little inciting details make the movie’s eventual focus and condemnation of Raymond’s crimes seem that much more toothless. The first half of “The East” is like a Coppola/Herzog-style fever dream in which a conflicted antihero is shown the limits of his perspective, and then the second half lets him off the hook because hey, this isn’t what he signed up for, man. Taihuttu and Duygulu don’t seem interested in providing easy consolations for Johan Jr.’s actions, but they also make it way too easy to walk away from “The East” thinking: Boy, isn’t it a shame that things like that happen elsewhere? 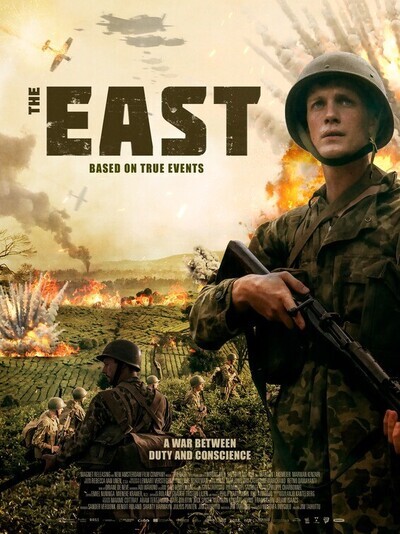