How is a movie that’s as conceptually bizarre as “The Divine Fury”—a Korean action/horror hybrid about a possessed mixed martial arts (MMA) fighter—not as thrilling as its wilder ideas? This is a movie where Yong-hu (Seo-joon Park), an agnostic pro-athlete, works on his daddy issues by joining good-natured Father Ahn (Sung-ki Ahn) in speaking Latin and exorcising demons. I agree, hypothetical reader, “The Divine Fury” does sound like fun, especially given that, in the film, demons tend to catch fire as they’re exorcised. There’s also a climactic fight scene involving a scaly demon-man. And a ton of dead air, boring asides, tedious backstory, and other unnecessary narrative padding.

Yong-hu’s story is almost never as cuckoo bananas on screen as it is on paper. Writer/director Joo-hwan Kim frequently announces his intention of taking Yong-hu and his crisis of faith seriously, but Kim often fails to provide enough credible details to warrant the excessive concentration that he brings to this mostly generic post-“The Exorcist” horror movie. Yong-hu is consequently just another good guy struggling to rid himself of a heavy personal albatross: his dad, Officer Park (Seung-Joon Lee), was killed by the “Dark Bishop,” the same demon that Park chases throughout “The Divine Fury” and that, in the film’s present day, possesses stick figure antagonist Ji-sin (Do-hwan Woo). But what Yong-hu sees as a weakness (doubt) is actually a strength in the eyes of Father Ahn, a priest who gives voice to the film’s most regrettable expository dialogue, though at least he doesn’t have to say “I possessed the guy who killed your father,” an actual line that one unfortunate actress, playing a possessed Catholic, gets stuck with.

With that said: Yong-hu and Ahn’s bond is easily the weakest link in “The Divine Fury,” even more so than the slick neon-and-mirrors sensibility that makes the film look like a “John Wick”-themed perfume commercial. Yong-hu sometimes asks about Ahn’s background as a priest, since he lost faith after his father’s death. But, while Ahn frequently answers his would-be apprentice’s question, his replies are mostly trivial, stuff like “Sure, [priests] can drink and smoke” and "A glass of wine after fighting demons makes me sleep like a baby.” I don’t know why I now know this, but I’m guessing you don’t either.

Ahn also has an annoying habit of describing Yong-hu’s character in ways that aren’t really confirmed or denied by Yong-hu’s forgettable, plot-pushing actions. Yong-hu is told that “You hate [God] very much, but people can't hate without truly loving,” but Yong-hu never meaningfully questions his faith or his anger. What does hatred for God even mean to Yong-hu, a character who initially talks to Ahn and a Korean shaman with equal skepticism? We’re told, in an early scene, that Christianity means a lot to Yong-hu because it meant a lot to his dad…but so what? More care was seemingly put into the lighting than the scripting of scenes.

Kim’s negligible investment in Ahn and Yong-hu’s core beliefs wouldn’t be so frustrating if most of the set pieces in “The Divine Fury” (pretty much any scene involving possessed women and children) didn’t look like one more box to check off of a long shot list. “The Divine Fury” is 129-minutes long and feels it. Some on-screen action is goosed by Ja-wan Koo’s Hans Zimmer-esque score, complete with periodic “braaahms.” But the sheer spectacle of victims levitating, vomiting blood, and screaming obscenities at feisty Yong-hu and patient Father Ahn just isn’t spectacular enough.

Sometimes, Kim throws in some fun incidental details, like the black chalk that Father Ahn uses to draw the sign of the cross on one demonically possessed victim’s bedroom door. But these familiar symbols don’t add to viewers’ understanding of the characters’ surroundings so much as they remind us of Kim and his collaborators’ creative limits. Yes, I am curious about why Father Ahn carries around an exorcism kit with a charcoal pencil forged from a “sacred olive tree.” Just as I’m interested in finding out what Ahn means when he mysteriously observes that Yong-hu’s father “must have been kind and righteous” since “apples don’t fall far from the tree.” Unfortunately, there isn’t a thought in Ahn’s head that his creators didn’t either dumb down or flat-out misconceive for him.

I hate leaving a higher-than-God-concept like “The Divine Fury” wondering why I don’t better understand its characters, or why Kim chose to dwell so much on his protagonists’ motives when he could have just treated them like sturdy clotheslines to hang a few good scare/action scenes onto. Kim’s movie didn’t provide satisfactory answers to that question, but it did leave me with several new burning ones, like what kind of wine does Father Ahn drink, and how far did his apple drop from his father’s tree? The truth, like religion and several other bad horror movies, is out there. 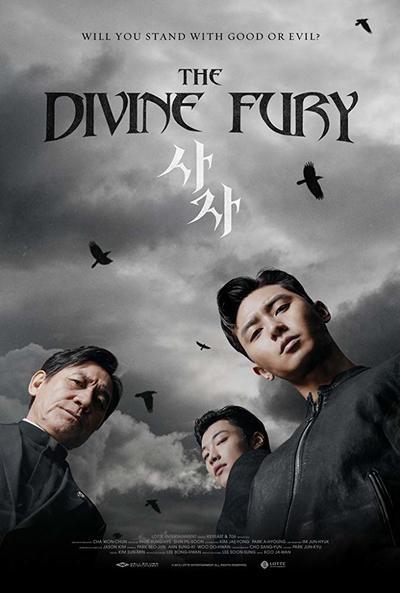