When I watch a movie for review, I usually will jot down some notes—a thought, a quote or an idea I can use when I sit down to write. In the case of Merland Hoxha’s “The Departure,” my first note was “why does this movie exist?” An hour and change later when the credits rolled, I still couldn’t answer my own question. My best guess to explain this vile movie is that it’s based on some nasty relationship drama, and we’re all invited to watch Hoxha work his way through some still-lingering resentment.

“The Departure” begins with an awkward date between John (Austin Lauer) and Amber (Olivia Lemmon). It’s painful to watch these two bumble their way through small talk before Amber’s attention shifts to her phone. “The Departure” then moves on to a more established couple, Nate (Grant Gunderson) and Jessica (Kendall Chappell), who are thankfully past the awkward dating stage and are in the throes of planning a life together. The next day Nate’s boss gives him a six-month assignment that will take him from Los Angeles to New York City. It’s an offer he simply can’t refuse, but rather than worrying about how they’re going to make a long-distance relationship work, Nate hatches a half-baked plan to ask his best friend John to seduce Jessica to see if she will cheat on him. It goes about as well as a multi-car pile-up on the 405.

Written, produced and directed by Merland Hoxha, “The Departure” lacks any kind of reflection that could make this premise work. Nate feels vindicated by how well his sociopathic trap works and shows almost no conflict guilting his girlfriend for her actions. It’s as if we are watching an abusive relationship from the point-of-view of the manipulative partner, his jealousy ignited and justified because his girlfriend mentions her funny male co-worker more than once. Ah, can’t have friends of the opposite sex! That’s grounds for suspicion. When John tells Jessica the truth about the plan and how he’s always had feelings for her, it feels like a bandaid solution to take the bitterness out of a jealous partner’s sting operation. It's not redemption, just chilling and gross to watch.

If the story was bad, I’m sorry to report the film’s craft is not much better. Ludovica Isidori and Wey Wang’s cinematography doesn’t account for lighting mistakes or messy handheld shots. In the scene where Nate recruits John for his scheme, the lighting noticeably changes between the two actors who look to be sitting in a strangely empty corner of the city. Hoxha’s script is clunky and its dialogue simplistic. I don’t know how else to explain why one of the millennials in this movie must define ghosting to someone else their age. Everybody’s job seems pretty nebulous, even though it's a character’s job that affects everyone. In one scene, John interrupts Jessica in what looks like a fitness class to ask her to check out a bar with him, which is not normally something that would go over well in a gym. And for some frustrating reason, Amber and John struggle a couple of times to remember the name of a recent horror movie (“Gerald’s Game”) as if neither of them has phones that connects to the internet. With these kinds of underwritten interactions, no wonder the performances look so wooden. Not even the actors believe the lines they’re reciting.

One last bothersome detail is how often the couple complains that they’ve “never spent this much time apart,” as if all flights to New York and Los Angeles have suddenly stopped and video calls don’t exist yet. It’s just one of the many mundane details missing from the script, but it’s not enough to distract from the movie’s sinister attitude towards women. There’s even a moment when John tells Jessica “You’re not really an angel, either,” as if any of this was her fault. If you haven’t noticed already, Amber is wildly inconsequential to the story, adding to the unsettling feeling that women are disposable in this man’s world. At least she’s spared a vengeful and sanctimonious partner who insists “I’m going to make her confess.” The last word in my notes on this movie was “ew.” 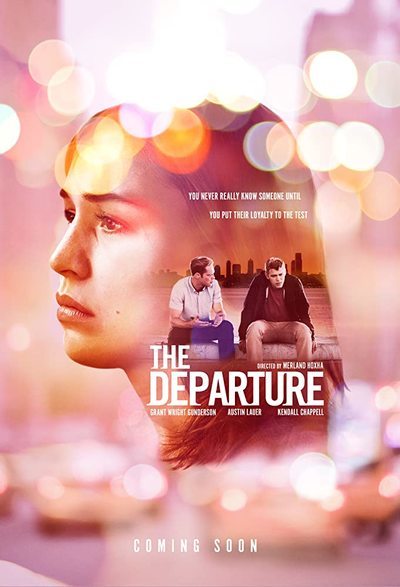