"The Daughter" comes bearing literary cred as a loose adaptation of Ibsen’s 1884 play “The Wild Duck.” It trades in a Norwegian backdrop for an economically bereft rural village in modern-day Australia while retaining the class-conscious premise of a family rocked by the revelation of long-held secrets and lies as it pits the privileged few against the depressed working class.

There is still a duck, one that symbolically gets injured thanks to the none-too-sharp shooting skills of Henry (Geoffrey Rush, emitting varying degrees of aloofness), a wealthy owner of a century-old lumber mill that is on the verge of shutting down while fleeing residents seek work elsewhere. Meanwhile, the damaged fowl struggles to recover. And, soon, human creatures that have been harmed by Henry’s undue past carelessness will be fighting in their own lives as well.

What is one to do when you take away a whole town’s livelihood? Put on a lavish party, of course. Henry is the type who likes to throw money at problems and he is sparing little expense as he is about to turn his slinky housekeeper into wife No. 2, much to the chagrin of Christian (Paul Schneider, the lone Yank in the cast), his adult prodigal son who returns home from the States to be best man. With his own marital situation collapsing, the last thing he wants to do is witness his father marrying a woman half his age—especially since his own mother was driven to suicide.

A reunion with happy-go-lucky school chum Oliver (Ewen Leslie, an ingratiating presence who radiates a cool-dad likability) starts off warmly until Christian sees how content he is with devoted wife Charlotte (Miranda Otto), adoring teen daughter Hedvig (Odessa Young, a vivacious beauty with lilac-infused blunt cut hair) and his scatter-brained yet insightful father Walter (Sam Neill, subdued yet rock solid). Not even the fact that he is among those who lost their job at the mill can keep him down.

Turns out, Christian is a recovering alcoholic given to violent and irrational outbursts when he goes on a bender. And the bottle soon beckons as it becomes clear he blames Henry for his mother’s demise—especially when he hears that Charlotte was once his father’s housekeeper, too. That leads him to surmise the truth about a duplicitous situation while transforming into a malevolent bearer of bad news in the name of honesty, dead set on making all and sundry as miserable as he is.

If you are getting the feeling that there are some sudsy operatic goings-on in director Simon Stone’s movie debut, inspired by his stage adaptation of the play, you wouldn’t be wrong. Not that he doesn’t try to camouflage the melodramatic soap with ominous outdoor landscapes with towering tree trunks and dark gray billows of clouds gathering on the horizon. He also makes good use of a cavernous warehouse space populated with the decaying shells of cars where Hedvig and her young swain go to make out. To add a modern edge, Stone and his editor are big on a weird time-shifting technique, first showing a space devoid of actors as we hear dialogue being spoken and then quickly cutting to the actual scene. The off-kilter handheld camerawork frequently chases after the figures as they move about. But there is no disguising that there's much more talk than action in “The Daughter.”

At least Stone has collected an impressive cast who will keep you watching even when emotions lean toward the histrionic. Schneider might have the thankless duty of being the catalyst. But he is also the weak link, lacking in subtlety and given few redeeming qualities as he grows ever more determined to unleash emotional chaos like a vengeful and increasingly stubbly werewolf. He is supposed to be an outcast—but he feels adrift in the movie as well. We spend too little time with the even-keel Christian at the beginning before he takes a turn for the worst to care much about him. But it is Young, a vibrantly natural presence who convincingly teeters between knowing rebel and vulnerable innocent, who captures our full attention.

“The Daughter” ends just as it begins—with the sound of gunfire. The duck, alas, is allowed to escape relatively unscathed. The people on the screen, not so much. But somehow what comes close to dissolving into heartbreaking tragedy instead offers the merest whiff of hope for the future. As Neill’s seen-it-all Walter says when all hell begins to break loose, “Everyone’s got a story like this … it’s as old as the hills.” If only said tale were told with a bit more consistency. 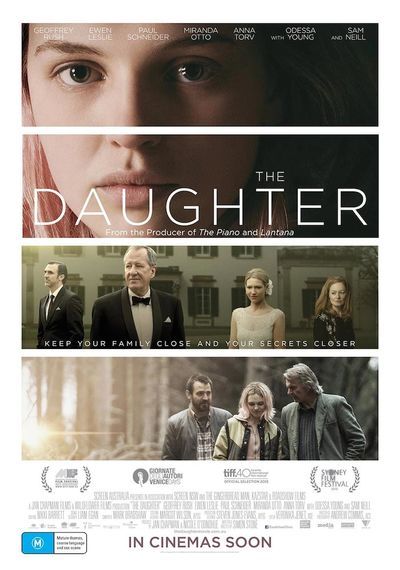