There’s a scene in “The Cut,” a stirring melodrama written and directed by Turkish-German filmmaker Fatih Akin (“Head-On,” “The Edge of Heaven”) about survivor’s guilt and the century-old Armenian genocide, that cuts to the film’s bleeding heart. In this sequence, Armenian refugee Nazaret Manoogian (an incredible Tahar Rahim) answers for a crime he initially committed impulsively, but consequently used to advance his quest to reunite with teenage daughters Arsinée and Lucinée.

Nazaret is a mute, so his actions are represented and judged in this scene through facial expressions, and body language. And because “The Cut” is openly influenced by (and an homage to) the similarly pantomime-centric silent films of Charlie Chaplin, the scene in question concerns the desperate measures someone with a tenuous hold on society’s bottom-most rung will go to to correct the universe’s seemingly malignant indifference. I fixate on this scene because it’s one of the most morally challenging scenes I’ve seen at the movies this year, and one I’ll be thinking about for some time to come.

But I’m getting ahead of myself. To set the scene: Nazaret is a blacksmith who miraculously survives a genocidal march into the desert. In the first half of “The Cut,” we follow him as he struggles to rejoin with society as he knows it. Composer Alexander Hacke’s droning electric guitar score sets the pace for these scenes—a dull ache that imperceptibly builds in strength as time passes. Nazaret wanders the desert, encountering some emaciated Armenians, and some Turkish collaborators, bandits, and/or persecutors. It’s a forbidding journey, but he eventually discovers that his daughters are alive, and embarks on a years-long journey to rejoin them.

On his travels, Nazaret meets several sympathetic companions. He is also profoundly affected by Chaplin’s “The Kid,” a tragicomedy that also assumes that human suffering is a universal constant. The biggest difference between Chaplin and Akin’s respective films is obviously a matter of tone—Nazaret’s life is a series of jarring confrontations. Fellow refugees are habitually ostracized by Turks; they’re overworked, robbed, and sold into prostitution. Nazaret’s behavior is therefore presented through a nebulous, amoral lens. He scorns an affluent former patron (a Turk) when he’s temporarily allied with a group of Bedouin bandits. These bandits are indistinguishable from the ones that Nazaret sees earlier raping the mother of two sons. People are not good or bad in “The Cut”—they are subject to violent whims, and rarely given fair opportunities to defend themselves.

“The Cut” can therefore be seen as a historical corrective. Nazaret may relate with the Tramp, but he rarely exhibits Chaplin-esque sympathies. While Akin’s film is often rather grim, the film is infrequently humorous, like when Nazaret tries to overcome his speech impediment by writing down the town name he’s from (Mardin), then realizes he’s communicating with an illiterate Turk. But for the most part, watching “The Cut” is a painful experience because it essentially serves to redress a heinous crime—showing how hard life in the shadow of atrocity can be for society’s undesirables.

So in the above-mentioned scene, Nazaret is confronted: Hagob Nakashian (Kevork Malikyan), an Armenian-Cuban barber who harbors Nazaret during his temporary stay in Havana, asks Nazaret where he got the money to travel by boat to America. Nazaret replies by saying nothing, as he does in many of the best scenes of “The Cut.” Still, while Rahim’s body language is tense, Akin shows Malikyan’s face as Hagob reacts to Nazaret’s silence with a forgiving smile. It’s a tense scene, and one that suggests an authorial approval of Nazaret’s actions.

But Akin doesn’t simplistically absolve Nazaret of his sins, nor does “The Cut” ultimately suggest that violence can be used to right serious wrongs. Instead, violence is shown to be a fact of life that people simply have to live with, as we see in the film’s moving finale. Akin’s humanistic approach to his characters is refreshing because it leaves room for doubt. His film is not, in other words, sentimental like Chaplin’s comedies, though “The Cut” is similarly empowering. Here’s a drama that tries to acknowledge and accept characters who are shown to have some agency, but aren’t always acting out of some utilitarian ideal of charity.

We are encouraged to judge Nazaret based on the harrowing circumstances of his life and the unsettled times he lives in. So when Hagob smiles at Nazaret, he’s not washing away Nazaret’s sins. In fact, Hagob is pointedly unaware of what Nazaret has done to earn money enough to travel to America. But he smiles anyway, and in that gesture, you can find the film’s complex worldview. “The Cut” is not an optimistic film, but it presents a scenario rich enough to make you want to be optimistic. 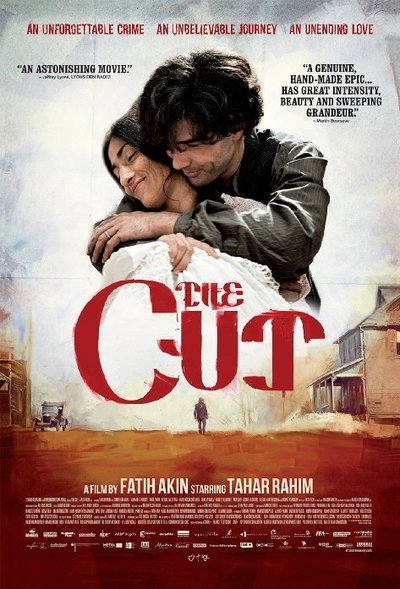