The Curse of Downers Grove

Downers Grove is a suburb of Chicago that over the years has served as the home of an absolutely lovely old movie palace known as the Tivoli, actress Denise Richards and several members of my immediate family. These are all endeavors that the town can be more or less proud of but that is not the case in regards to "The Curse of Downers Grove," an alternately idiotic and boring horror thriller that happens to take place there. Of course, no actual Downers Grovians were harmed during its making--it was shot in California and boy, does it look it.  However, a lack of scenic verisimilitude is the least of the problems on display with this bleak and ugly mess.

Based very loosely on MIchael Hornburg's 1999 novel "Downers Grove," the film opens by informing viewers about the so-called "Curse of Downers Grove," in which a senior at the local high school supposedly dies every year in some freakish manner in the days leading up to graduation. We see a flashback to the previous year's tragedy, in which a punk whacked out on meth plummets from the local water tower in front of his friends, none of whom seem especially put out. Is the curse real, the possible result of the school having been built atop an Indian burial ground, or is it a bunch of nonsense devised to provide an explanation for otherwise random tragic events? Most of the students think that there is a curse but our heroine, Chrissie (Bella Heathcoate), feels otherwise.

However, Chrissie has her own problems to deal with that are more pressing than a possible curse. After her mother (Helen Slater) goes out of town for a few days with her new boyfriend—the kind of thing that all parents do five days before their oldest child is to graduate—and leaves her and her younger brother (Martin Spanjers) behind, she and best friend Tracy (Penelope Mitchell) go off to a party in a neighboring town. While at the party, she is cornered by drug-addled star football player Chuck (Kevin Zegers), and when he tries to rape her in a bathroom, she pokes out his eye before fleeing with Tracy, hurling a car battery into the car of jocks pursuing them for good measure.

With his future as a football star now in ruins, as he is constantly reminded by his abusive father (Tom Arnold), Chuck begins a campaign of harassment against Chrissie that starts with veiled threats against her, her brother and her friends and then escalates rapidly to include brutally beating her brother, setting fire to her locker and dumping a bunch of freshly killed dogs on her front lawn. Alas, Chuck's father is a former cop, so even though Chuck has committed any number of serious offenses, the local police refuse to lift a finger to investigate Chrissie's numerous complaints. As a result, she is forced to take matters into her own hands and with the help of a local mechanic she has a crush on (Lucas Till), the neighbor boy with a not-so-secret crush on her (Mark L. Young), Tracy, her brother and the loaded shotgun that has been conveniently left behind at her place, Chrissie prepares for a final onslaught from Chuck and his sadistic sidekicks. Through all of this, Chrissie is forced to consider whether these events are indeed proof that the curse is indeed real and that she is meant to be this year's victim.

Based solely on the title and the basic premise, one might assume that "The Curse of Downers Grove" is one of those supernatural slasher films like the "Final Destination" series in which a bunch of attractive teenagers are bumped off in bizarre fashions. However, after setting up the whole conceit of the curse, the film then proceeds to essentially ignore it (other than the occasional Oliver Stone-inspired nightmare cutaways involving bloodshed and Indians) in order to tell a more straightforward story of an innocent girl fending off her increasingly deranged stalker in a town where kids seem to have the run of everything and adults are either ineffectual, monstrous or nowhere to be seen.

Although those forking over ticket money in the hopes of a straightforward horror film might disagree, this is not necessarily a bad idea for a story but neither co-writer Bret Easton Ellis (the bad boy author of "Less Than Zero," "The Rules of Attraction" and "American Psycho") nor director Derick Martini seem to have any idea of what they are trying to say or how to say it. The screenplay contains plenty of the casual nihilism and physical/emotional cruelty of Ellis's work but since it doesn't connect with viewers, either as serious drama or as dark satire, it all just feels hollow and ugly. For his part, Martini is clearly trying to go for a stylized, hyper-real effect in which everything looks normal but is a bit off but his results are off in all the wrong ways—the film feels as if it was made by someone who has been charged with making something in the tradition of "Blue Velvet" and "Donnie Darko" but who never actually got around to seeing them and is basing his work on what he thinks was in them.

Too dumb to be scary, too listlessly written and directed to be suspenseful and too unpleasant to work as camp, "The Curse of Downers Grove" is a film that has absolutely nothing going for it other than a reasonably sympathetic lead performance from Bella Heathcoate, the young actress who made an impression in "Dark Shadows" and "Not Fade Away" and who deserves to work with better material than she is dealing with her. That said, if I had to see this film again, I would love to see it in Downers Grove, preferably at the Tivoli, with a theater full of locals. My guess is that those who make it to the end will come away from it annoyed by the film as a whole, amused by the numerous ways in which it demonstrates that it clearly was not filmed in the area and wishing that they had just set the damn thing in Hinsdale. 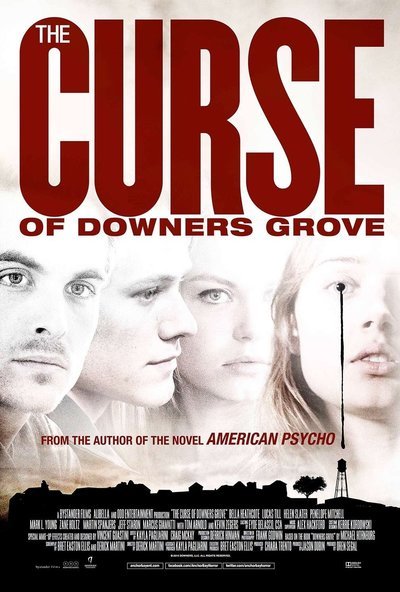