Sergio Navarretta’s “The Cuban” pulls together music, romance, loss, and memory into an emotional tale that spans cultures and generations. One thing connects them all: Cuban music. In the movie, a poster of legendary Cuban musician Benny Moré catches the attention of Mina Ayoub (Ana Golja) while working as a caretaker in a nursing home. Curious about the resident, Luis Garcia (Louis Gossett Jr.), who has the poster on his wall, she tries to connect with the stoic dementia patient. She tells him about how her grandfather used to play his music, hums Moré’s tunes, and eventually, plays one of his records. Her kindness awakens Luis from his stupor, and his memories transport him to the days when men wore dapper suits and women danced in fluffy skirts and elbow-high gloves in Cuba’s humidity. Luis calls out to someone named Elena, but Mina is the only one in the room. Soon, Mina’s unorthodox care lands her in trouble, but she presses on to solve the ever deepening mystery of who Luis once was and has since been lost to time.

Alessandra Piccione’s screenplay tells a story that's simple yet relatable for many, especially those of us who have lost family members and history to the ravishes of illnesses like Alzheimer’s and dementia. The movie doubles as a kind of tribute to those who have yet to share their past and a reminder for younger generations not to wait until it’s too late to ask someone about their life’s story. In between her efforts to uncover Luis’ past through Cuban music and food, Mina clashes with her strict aunt (Shohreh Aghdashloo), who gave up her career to flee her country and has now placed her deferred dreams of a medical career onto her niece. Their relationship presents another classic story, one of immigrant families putting high expectations on the next generation only to find conflict in generational and cultural differences. This manifests most prominently when Mina falls for a non-Muslim TA at her college, Kris (Giacomo Gianniotti), and he becomes her accomplice in helping Luis reconnect with his past.

There are moments when Piccione’s script feels too predictable, and like Navaretta’s direction and Celiana Cárdenas’ cinematography, comes across as heavy-handed. Mina’s impending reckoning with her bosses is so telegraphed, its conclusion feeling more like a formality. The film takes its time settling the audience in, taking us first through a light tour of Havana in watercolor paintings and then through the glum corridors of a nursing home. By “glum,” I mean think up the bleakest blue-grey filter and apply it to every nursing home scene so strongly that it almost looks like a day-for-night sequence, and that’s the look for most of “The Cuban.” When the film shifts into Luis’ fond memories, the scenes are bright and colorful, appearing even more majestic when compared to the drab pall over most of the movie, the one we spend most of our time watching. The switch is so jarring, that it almost feels like another movie entirely.

True to its title, “The Cuban” uses many of the island’s familiar standards, like “Guantanamera” and “El Cañonero.” Cuban jazz pianist Hilario Durán, whose stints with jazz greats Chucho Valdes, Dizzy Gillespie, and Arturo Sandoval share a resemblance with Luis’ career in the film, rounds the soundtrack with original compositions and covers, smoothing over the transitions between the past and the present and bringing lively arrangements of these songs to a new audience. However, for a movie about the healing power of music, some moments do feel uncomfortable, like when the audience first meets Mina to the sound of Middle Eastern-influenced strings, marking her difference from the Cuban man and his music with a bold music change.

Aside from a few technical quibbles, “The Cuban” is a fairly pleasant cross-generational, cross-cultural drama. While Golja seems a little unsure of her footing in some scenes, actors like Gossett Jr. and Aghdashloo keep her grounded and away from overacting. To his immense credit, Gossett Jr. gives a surprising performance for an 84-year-old, getting up and gracefully dancing a few salsa steps only to slink back to his chair exhausted, the momentary light in his eyes extinguished and leaving behind only a vacant stare. That moment is almost too uncanny to watch, but it speaks to his still-sturdy talent many of us saw in his recent appearance on the TV show “Watchmen.” His character doesn’t just give Mina a reason to fight for what she believes in; Luis still has some fight in him, too. “The Cuban” gives him one more trip down memory lane to enjoy before it’s gone for good. 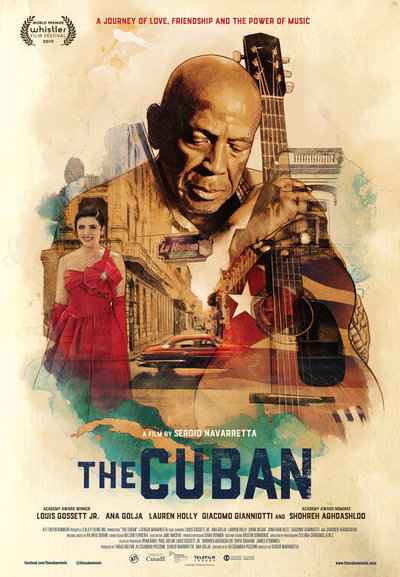