Aram Rappaport’s “The Crash” marks a very undistinguished convergence of two genres that have burgeoned in recent years: dark, brooding financial dramas reflecting fears unleashed by the 2008 economic recession, and thrillers that hinge on the spiraling perils of computers and related technologies.

But the movie may find its real niche in history by belonging to another, very curious and inevitably rather risible subgroup: Films Made in the Expectation that Hillary Clinton Would Become President.

Set in the very near future, “The Crash” concerns an effort to thwart a hacking of the stock market that could wreak havoc on the whole financial system, an effort involving members of the White House staff. Since their work reaches to the top of the executive branch, we occasionally hear mention of “Madame President.” Late in the story, we even catch glimpses of that eminence, who sweeps through a couple of scenes in a bustling, official hurry. She has straight blonde hair that obscures her face when she leans forward, but we know who this is supposed to be.

No doubt half of Americans could view this character with sarcastic satisfaction, while the other half might cringe with the realization that, a certain glass ceiling having remained undamaged by the 2016 election, “Madame President” will for the foreseeable future mark any movie as to belonging the realm of fiction—or erroneous anticipation.

Ironically, it’s not the defeated candidate but the victor of the last election whose lifestyle is most evoked by this film’s protagonist. Rather than being a real-estate tycoon and reality-TV star, however, Guy Clifton (Frank Grillo) is a flashy criminal who has managed to hold onto his palatial estate despite having been indicted for illegal stock-trading activities that have entailed some masterly hacking skills on his part.

“The Crash” kicks off when the feds, having found out about a planned hack by parties unknown that could collapse the U.S. stock market on a certain date, see no better course than to ask Guy to head up an attempt to derail the dastardly crime and discover its perpetrators. To that end, he assembles a small team of geeks with the skills to tackle the unconventional technical challenge.

There are two potential pitfalls in any film with this one’s premise, and “The Crash” tumbles into them both. One is that the peril being combated is too abstract to carry the emotional urgency of, say, an alien invasion or asteroid hurtling toward the earth. A stock market crash? The film imagines its disaster as prompting a run on the banks, and it provides glimpses of people fighting to reach ATMs. But all of this, it must be admitted, is not exactly California falling into the San Andreas fault on the fright-o-meter scale.

The other, related pitfall comes from a story that concerns high-tech dangers and remedies remaining too bound by them. Which is to say, this is the latest film with far too many scenes of people waving their arms in front of computers, shouting about algorithms and such. It’s a drawback only compounded by Rappaport’s style, which marshals enough shaky-cam spasmodics, unnecessary zooms, herky-jerky editing and other predictable visual tics to make the film look like a television cast-off.

Granted, Rappaport’s script tries to combat the two pitfalls just mentioned by introducing melodramatic elements concerning, say, Guy's unsteady relationship with his wife (British-accented Minnie Driver) and their daughter, who is beset not only with cancer but also a sketchy boyfriend and guilt over her family’s wealth. But none of this goes very far toward making Guy an interesting character, nor does Grillo’s performance, which comes across mostly as Pacino Lite (i.e., the recessive and smoldering Al, rather than the wildly gesticulating, eye-rolling, shouting-to-the-rafters Al).

Without giving too much away, it must be noted that other political discontents of recent times appear in the film’s depiction of its baddies: the heads of the nation’s major banks and the Federal Reserve System. These are all cartoon figures out of Frank Capra’s most feverish populist nightmares. One might well believe in their monumental greed and malign intentions in real life, especially if the outgoing president had thrown any of their sort in prison. Here, they just serve as a reminder that fiction can hardly remedy what politics leaves untouched. 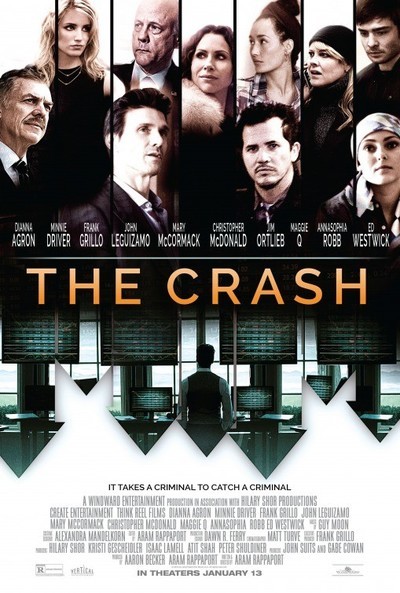