No matter how far in the future, we already know the first two lines of James Comey's obituary. One will be about his decision as Director of the FBI to announce, just days before the 2016 Presidential election, that the FBI was investigating new evidence of possible security breaches in Hillary Clinton's emails. The other will be about his being fired by President Donald Trump.

Both are the subject of Showtime's two-part "The Comey Rule," based on his "really, don't hate me, I did the best I could and so many people were worse" book, A Higher Loyalty: Truth, Lies, and Leadership. The title of the miniseries, the casting of Jeff Daniels as Comey, the frequent reminders of how much he cares about his family and the people who work for him, and the even more frequent reminders that he cares deeply about the law and integrity, suggest that he is the hero of this story.

Viewers may come to a different conclusion. They are more likely to decide that a man who fearlessly prosecuted mobsters was faced with challenges so far outside his experience and understanding of the world that he found himself entirely unequipped to understand or respond to them. Or even recognize them. Comey came from a world of well-established priorities and procedures, including respect for authority, and maybe a sense that his good intentions and dedication to leadership could persuade anyone. He was wrong.

More than once in the miniseries, Comey, his staff, and Department of Justice officials say they are forced to choose between unprecedented and seemingly equally terrible options. But some of the most important decisions are not debated in any detail. More significant than the Clinton emails investigation announcement was a decision not to make public additional information about Russian interference with the election, even as current intelligence downplayed by the Administration shows that it is a continuing concern. And Comey did not reveal that President Trump asked him to drop his investigation into Michael Flynn for lying about contacts with the Russians, arguably an obstruction of justice, until after he was fired, when it just looked like spite.

Comey cares a lot about leadership. He stands in line at the FBI cafeteria and chats with the staff. He asks his driver about his daughter's piano recital. He gives Deputy Attorney General Rod Rosenstein (Scoot McNairy) advice on how to make people feel more comfortable by asking them their favorite childhood candy. Daniels is especially good at showing us Comey's thoughtful, accessible, reassuringly calm expression when faced with terrible problems and pressures and his "you have my full attention and we will solve this" face when he responds to an update with a quick but quiet, "Say more." And then, there is the benignly blank look on his face when we know he must be thinking, "For the first time in my adult life, I am completely unprepared."

Two of writer/director Billy Ray's best films are also real-life Washington stories about liars who got caught, with satisfying results when the liars are exposed, disgraced, and in one of the cases, imprisoned. "Shattered Glass" is the story of hotshot New Republic journalist Stephen Glass, who fabricated many of his stories. And "Breach" is another FBI story, about a high-ranking FBI official who became a Russian informant in what was described as "possibly the worst intelligence disaster in U.S. history."

This Washington story does not have as satisfying a conclusion, at least not yet, perhaps because we are still in the middle of it. Some incidents depicted here have been overtaken by far more momentous events, including the impeachment proceedings and criminal convictions or guilty pleas involving a number of Trump associates.

This retelling, based on the experiences of one person whose tenure in the Trump administration was under five months, is too focused on the trees instead of the forest for even this hard-core Washington lawyer and policy wonk. So much worse has happened since the firing of James Comey that it is difficult to care about the pillow talk of two FBI officials who were sleeping together or whether it is wrong for an aide to reach out to the Russians before the President is inaugurated or for the President to ask the FBI Director for "loyalty."

The miniseries might have been better off as a slimmed-down two-hour film. It is too cluttered with characters and detail to work as a cautionary tale, though the updates on the FBI and Justice Department staff at the end is chilling. SPOILER ALERT for those who do not read the newspaper: they're all gone.

Any supporters of President Trump who watch this film will have no problem with a President asking an FBI Director for loyalty, despite the explicit contrast in the opening of the first episode with just-inaugurated President Obama (up-and-coming actor Kingsley Ben-Adir), interviewing Comey for the job of Director of the FBI. Though Comey is "a Bush guy" and a Republican who voted for McCain, Obama welcomes him as someone who will disagree in a constructive manner. In the interview, Comey emphasizes the importance of the FBI's independence from any political slant so he can be free to look into any possible wrongdoing by government officials. He leaves the meeting saying, "I hope I can look forward to years of not being close with you."

That episode ends with the election of Donald Trump, played by Brendan Gleeson, skillfully avoiding caricature, a challenge for a real-life character of excesses and exaggerations. But for that reason, and because nearly all we see of him from Comey's perspective, and perhaps because his greatest strength and weakness is that he is always exactly what we see on television, his Trump is never a fully-formed character. He refers to himself in the third person. He brags about how popular and successful he is and complains about the media. His responses are off the point and he changes the subject abruptly. Trump jokes with the Russian ambassador about welcoming Russian interference in the election if it is on his behalf. He is petty; Comey was fired when he was in Los Angeles for a meeting with FBI staff and learned he lost his job from a television headline. When Trump finds out that Comey flew back from LA with the DC-based staff on a government plane, he demands an investigation. He wanted Comey to be stranded in California.

Trump has Comey come to the White House for dinner, where he deploys his characteristic combination of flattery, braggadocio, and bullying. This is where we get to see Daniels' frozen, expressionless face as he is memorizing every word to write it all down on the way home—but keep it secret until he is fired, when his motives would be suspect. The motives are not the problem here. The problem is that the rules Comey and the rest of us relied on have a few more loopholes than we realized. 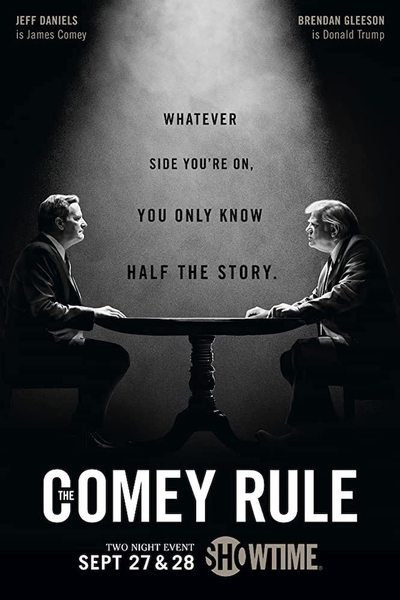