The Color of Time

I can tell you what "The Color of Time" is missing, but I can't tell you why it's not there. Based on Pulitzer Prize-winning poet C.K. Williams's autobiographical work, "The Color of Time" is about poetry, though it has none to speak of. It's an expressionistic drama that seems to heavily crib from the transcendental films of Terrence Malick, particularly "The Tree of Life," but is realistically just as indebted and influenced by the poetry of Rimbaud and William Blake, both of whom are cited as influences by one of the film's four different versions of Williams (James Franco). The makers of "The Color of Time," a cabal of twelve co-directors and co-writers, therefore focus on small gestures that are supposed to reveal Williams's main concern: how do you express meaning without language, but rather just through expression, and sensations? Sadly, by trying so hard to alchemically change small gestures into big ones, the film's creators suck the soul out of their film. "The Color of Time" has considerable ambition, but no inner life.

Throughout "The Color of Time," actor James Franco provides voiceover narration, guiding us through fragmented memories of Williams' past. That episodic, non-linear plot is one of many ways that the film's creators try to give viewers the sense that the fictionalized experiences they're seeing are authentic reflections of Williams's subjective memory. Williams similarly tells us at the start of the film that his poems are written in long verses since he wants to try to replicate the way people speak. The film's story is consequently a chain of pseudo-sensual experiences, like when a college-aged Williams (now Henry Hopper) drops acid, or when a teenage Williams (now Jordan March) sleeps with a prostitute.

That needle-drop approach to Williams's personal history isn't necessarily misguided, but it feels that way given the consistently uninvolving nature of "The Color of Time". Each episode drips with easy sentimentality, from the sepia-toned camera filter that makes everything look like a fading photograph to the serial abuse of extreme close-ups, the kind that leave everything out-of-focus but, say, a pair of hands clasping, or a drunken come-hither smile. "The Color of Time" is accordingly a frustrating work of fourth-hand romanticism: the right gestures are here, but they're presented as if they're inherently meaningful.

Take for example Williams' unexamined fascination with women. He loves his wife (Mila Kunis), or so Williams (Franco, again) tells us at film's end when, through his poetry, he expresses his thanks for having found a partner with whom to share his life. But what about an earlier scene where Williams recalls the matron that offers him a meal (he declines) but doesn't remember--or maybe doesn't want to admit he remembers--the face of the woman that he paid to give him oral pleasure? It's a troubling scene since its implications are completely unchallenged. We see Williams protest and flee the room, but we don't see the woman's face, and we never really know why.

That, presumably, is the film's point: Williams' life has recurring concerns, but no authoritative trajectory. It is, in other words, deliberately vague in parts, and therefore willfully frustrating. Each scene accordingly feels like an assembly-line version of "The Tree of Life." Close-ness is often conflated with real-ness, as we see in the film's myriad fuzzy close-ups, and hear in Franco's conspiratorial, unmoving voiceover narration, taken from Williams' poems. Likewise, watching a seven year-old Williams (now Zachary Unger) ask a girl "Where are you going," and seeing her reply "Where are you going" is just as meaningless as the scene where Franco's Williams discovers a wounded horse in a forest, and presses his palm against its neck.

Of course, "The Color of Time" wouldn't have to mean anything if it were simply moving. I won't ascribe bad faith to a movie whose creators' vision is clearly too myopic to match their lofty goals. But, while I can see the earthy, exultant film that the makers of "The Color of Time" wanted to make, the film they delivered often feels phony. 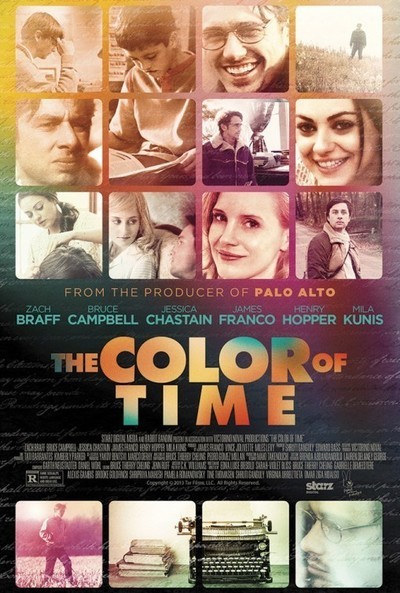 Rated R for some sexuality, nudity, language and drug use