“Your father has his own hobbies.” Duncan Skiles’ “The Clovehitch Killer” is a thriller/drama about a teenager who becomes suspicious of a few of his dear old dad’s “hobbies.” The title refers to a serial killer who murdered at least 10 women a decade ago but has since gone silent. In a small community like the one in which Tyler (Charlie Plummer, so great in “Lean on Pete”) lives with his family, a maniac that violently prolific doesn’t get forgotten and there are still vigils and people in town consumed with figuring out the identity of the madman who may still live in their midst. Tyler’s dad Don (Dylan McDermott) is a church-going guy who comes off as exceedingly normal. He’s the kind of awkward father who always calls his son “bud,” over-pronounces anything with more than two syllables, and thinks it’s hysterical to move his arms in a circle when he gives a “round” of applause (Get it?!?!). And then Tyler’s world collapses.

One day, Tyler “borrows” his dad’s truck to sneak out with a girl he likes. Just as his teenage dreams are about to come true, she finds a crumpled-up photo under the seat of a woman in bondage. We know it’s not Tyler’s, but she doesn’t believe him. But the truth is much worse than the rumors that go around school that Tyler is a "perv:" it probably belongs to Tyler’s dad.

It's just a photo though. No big deal. But Tyler starts to look at his exceedingly average father in a different way. As Tyler befriends a local girl named Kassi (Madisen Beaty), who is the town expert on the Clovehitch Killer, named for the knot he used to tie up his victims, he starts to notice more and more things “off” about dad, including the padlocked shed out back in which he spends a bit too much time. One day, Tyler breaks in and finds a few more bondage pics. So, dad is into kinky sex? Who cares, right? But what about the Polaroid of a tied-up woman with the name Nora written on it? Could that be Nora Devlin, one of the killer's victims?

The first act of “The Clovehitch Killer” is effective and engaging as a subgenre entry in the common coming-of-age dynamic of a son learning his dad is more complex than he first thought. In this case, murderously more complex. Is Don a serial killer? Tyler can’t bring himself to believe it, and Skiles plays with our own questions about his guilt or innocence for a while. Could Kassi be fueling inaccurate suspicions? The performances here are strong, too, with Plummer deftly selling the internal turmoil that would accompany horrific suspicions against a loved one and McDermott allowing potential darkness to seep through early, making the tension believable.

And then Skiles and his writer Christopher Ford start forcing Tyler and Kassi into situations that simply aren’t believable. And they start to pile up, one on top of another, until the movie collapses under their weight. We’re all willing to suspend a little disbelief if a thriller is working, but everyone checks out at a certain point when they no longer find what the characters are doing or saying genuine. Without spoiling much, Tyler finds something that looks really bad and the note I took was simply, “Cops would be called.” He certainly wouldn’t then go on a camping trip alone with dad. Plummer does the best he can to make his character seem believable but it’s almost as if scenes are missing regarding why he’d be so blindly loyal to someone he thought could be a serial killer.

And then “The Clovehitch Killer” really goes off the rails. It takes a drastic POV turn about halfway, answers any lingering questions, and becomes almost an entirely different film. I’m down with thrillers that try to shake up their viewers with turns like this movie takes, but Skiles and Ford don’t land it. In the end, the POV switch feels more like a cheap trick to get to a shocking moment more than anything that dramatically enhances the film. And the fact is that as good as Plummer and McDermott are here, Ford ultimately writes himself into a corner that requires actions in the final act that don’t ring true. Like a clearly guilty man professing his innocence, "The Clovehitch Killer" runs out of excuses. 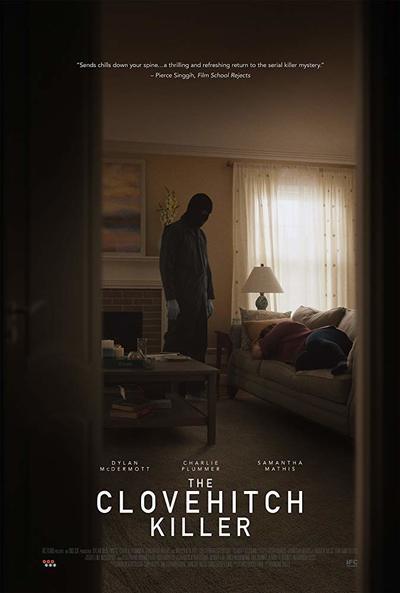