One of the first great movies of 2020 (with a theatrical release planned for March) is Michael Angelo Covino’s “The Climb,” an American comedy that boasts inspired filmmaking, and a white guy bromance that feels fresh. It's a jaw-dropping achievement as a directorial debut, but within the scope of all the funny movies before it that have relied on a bland point-and-shoot mentality—regardless of budget size—Covino’s film is an exhilarating anomaly, if not a wake-up call for the visual potential of heartfelt comedy. You can trace the script's characters and situations back to shaggy Sundance-promoted indies, or glossy studio comedies, and yet “The Climb” has Covino making his own mark with cinematic ambitions that promise a career worth keeping a close eye on.

“The Climb” kicks off with a bravura opening sequence, one of many that features shots of an extensive length. Friends Mike (Michael Angelo Covino) and Kyle (Kyle Marvin) power through through a hellish passage on some European bike ride—when Mike gets a bit ahead of him, he yells back that he’s slept with Kyle’s fiancee. The two argue while Kyle tries to catch up, like brothers playing a game of tag that just got real. Covino announces his visual ambition in a major way by letting the camera roll uninterrupted throughout, filming them as they go up different hills and while bounding between various dramatic beats. Their rapport quickly achieves layers, of being abrasive and also beautifully goofy, with brilliant visual tension—Kyle huffs and puffs in the background after this life-shattering news takes even more wind out of him, and tries to catch up with Mike in the foreground so that he can, as Kyle promises, kick his ass.

Written by Covino and Marvin, the story concerns Mike and Kyle’s friendship through different rocky chapters in their lives, and uses composed long takes to capture the immediacy of those interactions. Mike and Kyle go through numerous episodes in which you think their bond would be destroyed, as with the opening bomb that Mike drops, but their great screenplay’s deeply entrenched motivations and needs, their elasticity can prove stronger than the shocking things that happen. Covino plays a guy who proves to be extremely flawed and unlikable—a bad friend in a lot of ways, and yet the script offers a natural idea of Kyle and Mike's very complicated dynamic.

The biggest threat in Mike’s mind to Kyle and Mike’s friendship, other than himself, is a woman named Marissa (Gayle Rankin). Kyle and Marissa announce their engagement to his family members one holiday, and it has the air of Kyle going along with something that the considerably more forceful Marissa wants to get off the list. When a depressed Mike saunters back into Kyle’s life, uncertain that Marissa loves him, the three of them make for a contentious trio who lead with their characters’ mysterious endgames. As Mike and Marissa battle over Kyle in hilarious wars of words, their performances are excellent and fully alive across the board.

The true magic behind making an extended sequence film like this is getting the audience to forget they’re watching a scene that has been meticulously constructed, and yet maintain the emotional focus that comes with a fluid camera guiding one’s eye from one striking image to the next. “The Climb” excels at that, especially as its acting and beats establish a confident rhythm by around its third chapter. Covino’s choice to actualize sequences with continual shots (some stitched together with discernible transitions) helps the script pop with numerous funny off-hand jokes in dialogue, and ramps up excellent visual comedy (like when one shot peacefully takes us from inside a church to the outside, only for Mike to crash right into frame). You forget a shot’s length midway through because the script fosters a sense of surprise—you’re never sure how a different chapter is going to play out, or where Mike, Kyle, and Marissa will be at the start of the next one. You’re assured, however, that it will all be executed in a way that’s thrilling and charming in a way that very few comedies ever are.

To put the specialness of “The Climb” in perspective—it’s no stretch to say that Covino’s indie-that-can beats a one-shot spectacle Sam Mendes’ “1917” at its own game. "The Climb" is accomplished in its technical ambitions without being showy, and because it is so character and dialogue-based, it forces the filmmaking to be creative with its blocking, framing, and overall rhythm, all while ensuring we always care about this wildly dramatic but very funny friendship. It’s impressive, for one, how Covino and crew can float the camera in between Kyle’s many family members at a busy Thanksgiving, or along a big patch of melting ice during a bachelor party that goes wrong. But “The Climb” is a top-tier American comedy because it can always breathlessly guide you to its next gripping heart-to-heart between two people, where the cast’s equally meticulous character work shines.

This review was originally filed from the 2020 Sundance Film Festival. 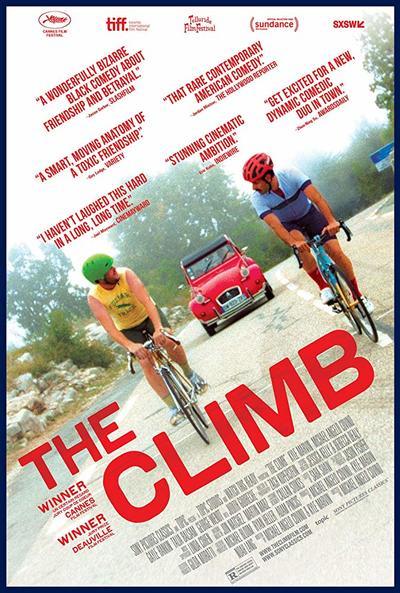 Rated R for language, sexual content, some nudity and brief drug use.