The Norwegian disaster thriller “The Burning Sea” may be gloomier and more character-driven than American genre nuts may be used to, but it’s still generic and therefore familiar enough to be satisfying. If anything, the makers of “The Burning Sea” (some of whom helped to make both “The Quake” and “The Wave”) don’t do enough to distinguish their ticking clock plot—a makeshift consortium of scientists, politicians, and oil rig workers must team-up to prevent a seismic catastrophe following the collapse of a Norwegian oil rig—except by making their story smaller and more focused than most other movies of this type.

The film has a couple of impressive scenes of apocalyptic computer-generated (CG) mayhem following the discovery of a potentially enormous crack in the North Sea’s floor. Not enough, but some. There’s also some tense moments of rising action, mostly concerning no-nonsense submarine expert Sofia (Kristine Kujath Thorp) and her journey to reunite with her self-sacrificing oil rig worker love interest Stian (Henrik Bjelland), who inevitably risks his life in order to save many others. The main thing holding “The Burning Sea” back from being more than an acquired taste is also what makes it satisfying as such: these characters never really go anywhere or do anything unexpected.

“The Burning Sea” starts and finishes with a preachy but studiously inoffensive bookend sequence featuring chilly oil rig rep William Lie (Bjørn Floberg), who tells viewers—on-camera, as if he were the subject of a talking head documentary—about Norway’s complicated history with offshore drilling. There’s regret in Lie’s spiel, despite his pointed refusal to complain too bitterly (or specifically) about who’s to blame.

At the same time, Lie’s a company man and an emergency manager, so he’s inevitably got to remind Sofia and her chummy co-worker Arthur (Rolf Kristian Larsen) that they both signed non-disclosure agreements. Meaning: they legally can’t warn anybody about the imminent and highly explosive disaster that might be about to pop off at the Gullfaks A oil rig, located 220 kilometers off of Norway’s Western coast. Lie turns out to be more sympathetic than you might expect from a character in his position, though that’s partly because, as he says up-front: he used to work on oil rigs, too. He’s a manager now, so Lie’s sympathies are now more elusive.

Lie’s unexpected humanity says a lot about “The Burning Sea,” a movie that spends more time building up Sofia and Stian’s relationship than pumping up the evacuation and probable destruction of Gullfaks A. Sofia is also shown to be an expert at operating remote-controlled subs in a few establishing scenes, but her rapport with Stian and his son Odin (Nils Elias Olsen) often overshadows her identity as a resourceful scientist. That’s not so bad unto itself, but one does wish that she got to do more James Cameron-style heroics instead of some cute, but unremarkable PDA with Stian. Unlike most disaster movie couples, Bjellan and Thorp have tangible on-screen chemistry, but that doesn’t mean an extreme close-up of the couple Eskimo-kissing isn’t also a bit much.

Lie obviously plays a major role in the movie’s narrative, mostly keeping up with scientists like Sofia and the other worker drones at the offshore operations headquarters Saga Stavanger. He can talk to and even work with higher-ups, like the well-meaning but indecisive Oil and Energy Minister Steina Skagemo (Christoffer Staib). And Lie is also obviously a good emotional target for a handful of cornball scenes, like when Sofia protests that, if Stian doesn’t come back from Gullfaks A alive, “there’s a little boy out there who’s going to lose a father.” That line would induce major eyestrain even if the movie was a veritable bonanza of CG explosions (though more of that might have been nice, too).

The familiar nature of “The Burning Sea” either sells or sinks the whole enterprise. You might like this movie well enough if you enjoy watching characters hunch over computer banks while murmuring stuff like “It can’t be,” “They’re from ten minutes ago. How can they be wrong?” and “Seventy-five meters.” Or maybe you enjoy watching underdog heroes dress down (seemingly) uncaring middle-men like Lie by insisting that thousands of imperiled oil rig workers “have the right to know” that they might soon blow up. “The Burning Sea” may ultimately be too uptight for its own good, but there’s enough here to satisfy disaster aficionados who’ve already been here before and only really want to root for more of the same. 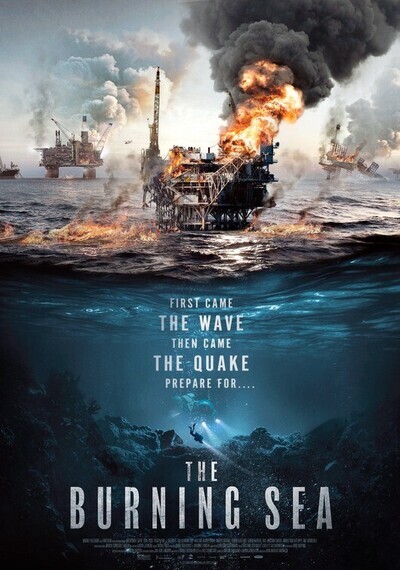