In March of 2020, "Jurassic World Dominion," well underway in its shooting schedule, shut down production—along with every other project in Hollywood and elsewhere—in response to the Covid pandemic. A controversial decision was made to resume shooting in July at Britain's Pinewood Studios, months before other films and television shows resumed production. Draconian Covid protocols were strictly enforced, because, of course, there wasn't a vaccine yet. Health facilities were on standby. The entire cast and crew quarantined for two weeks in a hotel set aside strictly for them. Hand sanitizer stations stood every couple of feet. There was a lot of talk at the time about all of this. Was it right to be putting actors and crew in this kind of danger just for a movie? The decision to resume filming had practical (i.e. cynical) reasoning behind it. Too much money was on the table.

Judd Apatow's "The Bubble," filmed at Shepperton Studios, satirizes this entire well-known event with a light-hearted attitude. Structured in loosely connected episodes (where entire sub-plots could be removed without impacting the whole), "The Bubble" is often quite funny but—at a little over two hours long—there are sections where it drags or flounders. With material like this, faster (and shorter) is usually funnier.

Cast and crew gather together in England to shoot the sixth installment of the "Cliff Beasts" franchise, a worldwide phenomenon about a group of scientists and researchers going toe to toe with flying dinosaurs dislodged from a polar ice cap or something like that. The director of this new installment is a guy named Darren (Fred Armisen), who "won Sundance" for a movie he shot on his phone about his experience working at Home Depot (a very funny critique: from indie film to superhero movie in a matter of months). As the actors arrive at the huge Downton-Abbey-style mansion where they will be quarantined, the characters are tossed at us in quick sketches. There's Carol (Karen Gillan), who despises the franchise and keeps trying to get out of it. Dustin (David Duchovny) and Lauren (Leslie Mann) are a long-time married couple on their way to a divorce. Dustin has re-written the script to highlight the dangers of global warming, but nobody wants to hear it. Sean (Keegan-Michael Key) has spent his couple of months off creating a "lifestyle brand" called Harmony Ignite, and he bores everyone with toxic positivity. Howie (Guz Khan) goes stir-crazy almost immediately, trying to organize a drone delivery of marijuana, and Krystal Kris (Iris Apatow) is a TikTok star who's never acted before, and ropes in cast and crew to doing elaborate dance videos all around the mansion. Pedro Pascal, Kate McKinnon, comedy duo Ben Ashenden and Alexander Owen, and others fill out the cast.

Apatow and co-writer Pam Brady keep it loose enough to leave room for improvisation and silliness, and these scenes are the highlights. Everything Guz Khan says is hilarious. Duchovny doing TikTok dance choreography is, to inappropriately quote John Keats, "a thing of beauty and a joy forever." Mann and Duchovny's scenes together are great, making you hungry for more. Gillan is frazzled from start to finish with a believable sense of desperation. When all of these characters are onscreen at the same time, it is legitimate chaos, and a lot of fun. The whole filming aspect doesn't go over quite as well. We see entire scenes from "Cliff Beasts," both being rehearsed and then filmed, and the movie looks terrible in an unbelievable way, almost like a "Waiting for Guffman" version of "Jurassic Park." None of it is as funny as it could be, and not enough is made of Darren, the "visionary" director going for a cash grab in a soulless job.

There are a couple of romantic sub-plots that don't really go anywhere or connect to anything else. There's a lot of stuff about the murderous security team hired to keep the actors on site, and those sections don't really work. They are clunky and feel imposed.

The film is best in its embrace of the random, its moments when the talented and funny cast goof off with each other, responding to one another's eccentricities. After an impassioned monologue about the abusive conditions under which they are filming, Carol declares she means what she says: "This isn't me acting!" Dustin says, "We know. That felt real." Where "The Bubble" really shines is in its humorous reflection of that all-too-rare thing nowadays—a collective experience. There's a scene where the crew is shown washing off vegetables and spraying Lysol on bottles of soda, and probably most people can look back on 2020 and hashtag-feel-seen. Apatow's lampooning of the self-importance of his own industry—"we must get back to work because humanity needs us!"—is also on point. Humanity needs a lot of things but “Cliff Beasts 6” is probably low on the list. 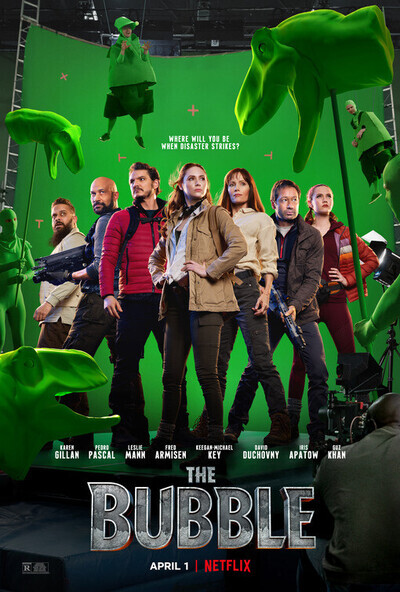 Rated R for language throughout, sexual content, drug use and some violence.