“The Boys in Red Hats,” a personal project from director Jonathan Schroder, recalls what one talking head calls “the smirk heard round the world” to explain the roots of our present political divide.

On January 18, 2019, a group of students from Kentucky’s Covington Catholic High School, while on a field trip in Washington DC to attend the “March for Life” rally, found themselves at the steps of the Lincoln Memorial. There, adorned in red MAGA hats, they were confronted by Nathan Phillips, a Native American elder beating his drum for peace. The image of one student in particular, Nick Sandmann, smirking at Phillips went viral, leading social media and some news outlets to vilify the teens from the private affluent school, only to retract when the full clip showing the total events was revealed.

Beyond sorting through the timeline leading up to the controversial incident, what gives “The Boys in Red Hats” its unique lens is Schroder’s background. In addition to being a documentary filmmaker for National Geographic, he is a graduate of Covington. By proxy, this documentary assumes an introspective meditation on the director’s uneasy relationship with the school as he first feels ashamed of his connection with them, and then becomes a fervent defender, only to uncover his own biases. The best scenes, for instance, often see Schroder with his producing partner Justin Jones sharing their thoughts on who’s more trustworthy: Phillips or Sandmann.

Figuring out who to believe is the film’s most prominent throughline. We discover that Phillips’ background ain't squeaky clean. In fact, he’s a habitual liar. We also confront the immense privilege felt by boys like Sandmann, who can hire a team of lawyers while attending an institution that’s a pipeline for Harvard, Princeton, and Columbia. And with each detail we learn about them, Schroder’s transparent bias protects the teens as he explains away their tribal chanting of the school song, their unwillingness to back down in the face of opposition from Nathan, and the controversial, antagonistic Black Hebrew Israelites, who were also in DC.

Schroder is an unlikely defender of Covington. He didn’t come from wealth like his classmates, but gained admission through being a football player. Yet through friends like Brian Williams (this documentary is also a tribute to him), he took pride in his school. His background makes him the perfect medium between the acolytes dedicated to defending Covington—parents like Jim Wilson and Jill Hamlin, who chaperoned the school’s DC field trip—and the skeptical alumni.

As Schroder ping-pongs from the talking heads on one side to the other, “The Boys in Red Hats” becomes a microcosm of the debates that now dominate the popular political discourse, wherein each party believes in their rightness with absolute certainty. Schroder diagnoses the disconnect as symptomatic of our bubbles: Covington is easy to dislike because they’ve insulated themselves from the world. There are barely any people of color who attend the private institution. Their school fight song essentially says, “you’re going to work for us someday.” And when confronted with their isolation they shut down and their baser instincts come out, like when one parent says they didn’t get a “hand out,” or when a camouflaged student proclaims themselves the victim.

Like many other documentaries today, "The Boys in Red Hats" uses the tired storytelling device of animation (in this case simple doodles) to recall Schroder’s life. A larger metaphor that the director uses to discuss forgiveness—sharing how a venerated teacher at Covington punched him for cracking a joke—doesn’t fit seamlessly either. And because of Schroder’s bias, Nathan Phillips is glossed over. The filmmaker mentions that Phillips had a difficult life, but doesn’t expand much beyond that. Instead he remains fixated on securing an interview with Sandmann.

Even so, “The Boys in Red Hats” is refreshingly transparent, and it's more than a simple examination of the events that occurred on January 18, 2019. It uncovers the prejudices shown by the participants and the filmmaker himself, and how ideologies begin early and are formed over time. Few directors would expose themselves to this degree, and Schroder deserves kudos for his openness on this journey of self-discovery. “The Boys in Red Hats” is a necessary watch that elicits frustration by exposing our insular ideology with a raw aplomb. 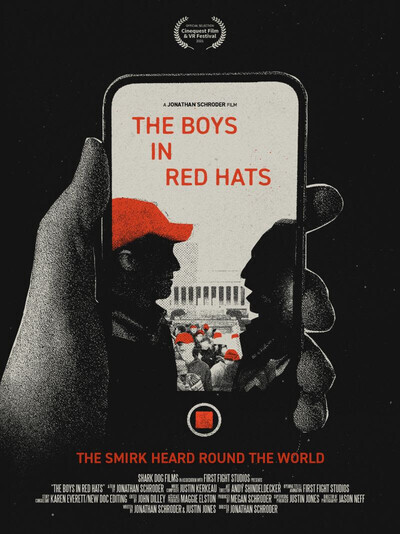