Having all the right ingredients does not always make a good cake, or, given the setting of this film, I should perhaps say a bread pudding with just the right proportions of chewy and creamy. “The Bookshop” is based on a novel by Penelope Fitzgerald and it stars actors who are loved on both sides of the Atlantic: Emily Mortimer, Bill Nighy, Patricia Clarkson. It has an adorably quaint setting, a 1950s-'60s seaside town in England. It features books and shops and has as its heroine a brave widow who loves to read and is willing to stand up to the village doyenne, one of those villains whose superficial graciousness and courtesy are only cover for ruthlessness and fury. And the screenplay is written by director Isabel Coixet, whose 2003 quiet gem “My Life Without Me” was exceptionally sensitive and moving.

So we come to it with high expectations and it is especially disappointing that this movie never comes together.

Mortimer plays Florence Green, whose husband was killed in WWII. She met him in a bookstore, and she dreams of opening one of her own in an old abandoned building in a small East Anglian town. She is patient but firm in her dealings with the lawyer and banker who clearly think she should not be worrying her pretty head about business. When the banker tells her that he does not think anyone will buy books because he falls asleep after reading two or three pages every night, she cheerfully replies that he has just proven the value of books.

Florence underestimates how formidable a foe she has in Violet Gamart (Clarkson), the wife of a retired general who treats the village as though it was under her command. Wearing gold lame and a slash of bright red lipstick, with a long, thin pink cigarette elegantly poised between her fingers, she tells Florence, “I believe I can spare you many disappointments and maybe a bit of money,” meaning, “I will do whatever it takes to boot you out.”

The narrator intones, “Florence had managed to live life thus far by pretending that human beings were not divided into exterminators and exterminating, with the former at any moment predominating,” one of many instances of telling instead of showing or, even worse, telling on top of showing.

Florence moves her bookshop into the old house, and moves herself in as well. And the narrator intrudes again to let us know that this moment would be her happiest in the shop, telling us before showing us, which is worst of all. Though beautifully read by an unseen and un-credited Julie Christie, the narration is unnecessary and distracting, only reminding us that an audible version of the original book with Christie’s voice would be a much more suitable adaptation.

This is a particular letdown for fans of period British drama, who love nothing more than settling in to watch a story about people who wear wellies and cardies to walk through picturesque cobblestone roads on their way to chat over cozy-covered teapots. Mortimer and Nighy are captivating as always, and so it takes a while to realize that the many slow pauses are not adding up to much. There is a build-up to Florence’s decision to sell the controversial Lolita, but it does not really go anywhere, either. While Fitzgerald wanted to explore small town small-mindedness and petty politics, it is fair to expect that a movie about a bookshop that has three characters commenting that they do not like reading will at least find one of them at some point captivated by a book, perhaps even Lolita.

Most grating is one of those impossibly precocious child characters who is completely unconvincing as anything but a writer’s shortcut for narrative convenience. And Nighy is burdened with a reclusive, book-loving character whose quirks are intended to be endearing, but even he cannot make it work. He tells Florence to go ahead and buy 250 copies of Lolita for the village: “They won’t understand it, but that’s all for the best. Understanding makes the mind lazy.” Not every story about a woman moving to town to open up a controversial shop has to be as endearing as “Chocolat.” But movies, like reading, should expand our ability to understand, and this one does not even understand itself. 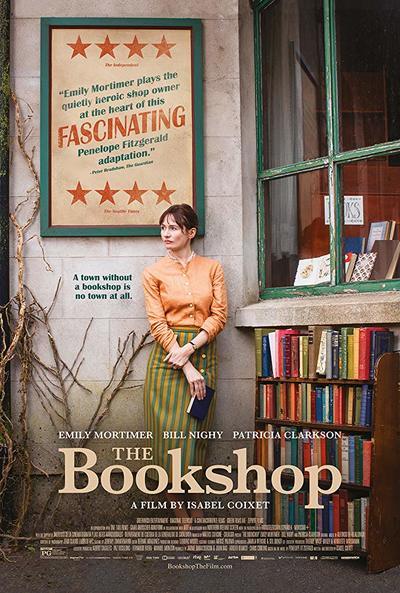 Rated PG for some thematic elements, language, and brief smoking.