Following in the animated footsteps of “The Simpsons Movie” and “South Park: Bigger, Longer, and Uncut,” the Belchers make the leap this week to the big screen in “The Bob’s Burgers Movie,” a delightful little romp that should appeal mostly to fans of the show, even if hardcore devotees might feel like there are a few 4-5-episode runs of the series that are stronger than this film. On the fresh side of the bun, “The Bob’s Burgers Movie” is briskly plotted and nails the big heart and wonderful characters of the beloved FOX show. On the stale side, it lacks a little in the ambition department, setting up an interesting tale of various issues of doubt within the members of the Belcher clan only to not do much with that set-up until a rushed finale. But it’s never boring, and it’s smarter than most pop culture-obsessed children’s entertainment. Anything that brings the joy of loving “Bob’s Burgers” to a wider audience is a good thing, even if I mostly hope this does well enough to guarantee a bigger and better sequel.

If you’re unfamiliar with one of the best animated shows of the modern era, “Bob’s Burgers” is the tale of the Belcher family, led by burger man Bob Belcher (H. Jon Benjamin). He runs a small restaurant in an unremarkable part of town that has a funeral home next door and an Italian joint across the street, run by his nemesis. His wife Linda (John Roberts) is the eternal optimist to Bob’s worrywart—she even calls his anxious side “Droopy Bob” in the movie. They have three children: nervous Tina (Dan Mintz), creative Gene (Eugene Mirman), and rambunctious Louise (Kristen Schaal). Their landlord is the eccentric Calvin Fischoeder (a wonderfully playful Kevin Kline) and their best customer Teddy (Larry Murphy) has a habit of stealing episodes between burger bites.

This big screen adaptation hits the ground running when Bob and Linda find out they have seven days to repay a bank loan they can’t afford. On the same day, a massive sinkhole opens in front of their restaurant, which you could say negatively impacts business. At school, Tina obsesses over turning Jimmy Jr. (also Benjamin) into her summer boyfriend; Gene keeps trying to get his band, The Itty Bitty Ditty Committee, off the ground; and Louise struggles with self-esteem when she’s called a baby by the older girls. Most of the characters are dealing with doubt to some degree—over the business, over a boy, over art, over maturity. The writers of “Bob’s Burgers” have often been able to thread relatable, emotional issues through their often-broad, goofy, Broadway musical-inspired scripts in a way that can sneak up on you.

Any “Bob’s Burgers” fan will tell you that original music is a big part of the show and there are some fantastic numbers in “The Bob’s Burgers Movie,” even if I could have actually done with a couple more. The highlights are the opening number that kicks off the story on a perfect note and a great bit with carnival workers doing some impressive choreography, but the music aspect gets largely dropped for the reveals of a mystery plot when it looks like one of the Fischoeders may have committed a murder.

“The Bob’s Burgers Movie” sometimes falls back a bit too much on its whodunit story when it’s really the characters that people have come to see. It’s hard to believe given the state of storytelling in modern big studio animation, but there’s more plot here than the movie needed, or at least the plot that is here in terms of the Fischoeder mystery is kinda dull. The film is at its best when it’s being a big-hearted hang-out movie, whether it’s about Teddy trying to get Bob’s burger operation mobile or the outfit Linda comes up with to market it. Just watching these fun, well-defined characters bounce off each other for 100 minutes is smile-producing, and so the reliance on a thin mystery plot feels almost distracting from the truly good stuff.

Still, “The Bob’s Burgers Movie” is a hard movie to dislike, whether you’re a fan of the show or not. After all, it’s about a family trying to hold it together through economic hardship and physical danger, who are reminded that they don’t have be defined by their insecurities. Who can't relate? Bob doesn’t have to be droopy. Louise can be brave. Gene can express himself. Even Tina can make a big move (for Tina). It’s nice to see “The Bob’s Burgers Movie” stay true to its roots while also pushing its characters out of their comfort zones ever so slightly. It’s almost inspirational. Well, maybe that’s a stretch, but you’ll definitely want to get a burger after. 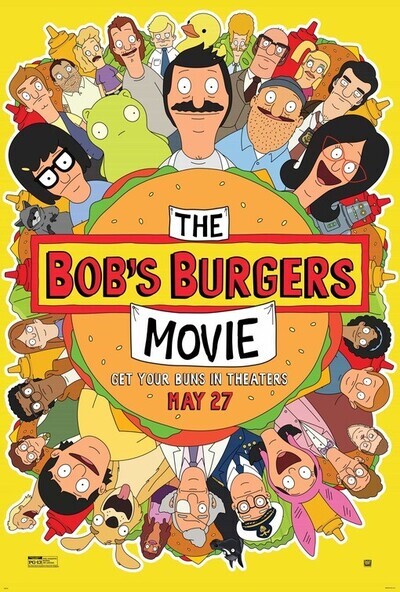