The Beast Must Die

Cush Jumbo, Billy Howle, and Jared Harris elevate a relatively soapy story in the British export “The Beast Must Die,” a six-part limited series that premiered originally on streamer Britbox in the U.K. and is now unfolding in the United States on AMC+, starting today, July 5th, airing a week later on AMC proper. Examining the manner in which trauma and grief can lead people to make very bad decisions, “The Beast Must Die” also examines privilege and its ability to make people into monsters by giving them lives that never contain consequences. There are times when the filmmaking here underlines the mental states of its character a little too boldly, but the acting carries the project as the trio carve out fascinating, memorable people who feel completely distinct from the plot’s twists and turns. I’m not completely sure it sticks the landing, but I’ll remember these three people when the year ends, and sometimes that’s enough to make a mini-series worth watching.

Jumbo of “The Good Fight” fame plays Frances, a mother deep in unimaginable grief. Six months ago, her six-year-old son was killed in a hit and run accident on the Isle of Wight, and she’s just been informed that the police have basically run out of leads. Imagine losing your son and then imagine having to live knowing that the person who murdered him is just going happily with life. Frances decides she can’t live like that, and she sets out to find the killer herself, determined to kill him when she finds him, which honestly doesn’t take her very long.

By the second episode, Frances has not only done the job the police couldn’t do but she’s befriended a key witness from that day in a young woman named Lena (Mia Tomlinson), inveigling her way into her life with the story that she’s writing a novel about her industry. Lena’s brother-in-law is George Rattery (Harris), the kind of bullying social climber whose success has turned him into a monster. He pushes everyone in his life, including his quiet wife Violet (Maeve Dermody), sister (Geraldine James), and awkward son Phil (Barney Sayburn). As he quite simply always is, Harris is great here, turning a character who could have been a two-dimensional villain into something even darker in its realism. George drives fast and bullies people not only because he’s a risk taker but because he knows he’s rich and powerful enough that there are no real risks. Harris leans into the character, biting on each line delivery.

Meanwhile, a new detective named Strangeways (Howle, increasingly impressive with each performance) has moved to the Isle of Wight. Self-described as “a therapist’s retirement plan just waiting to happen,” not only is he cleaning up a relatively lackluster police department but he’s fleeing PTSD after the death of a colleague. He meets Frances and “The Beast Must Die” becomes a show about two people trying to get justice from different sides of the law. Will Strangeways find enough evidence before Frances does something drastic in the name of vengeance?

“The Beast Must Die” jumps in hard, pushing the emotional registers of Strangeways and Frances a bit too harshly at first with quick cuts and heated outbursts, but it gets more interesting about halfway through the second episode, in part because Harris balances the other two performers. It becomes a compelling dance between three very different people from different walks of life, and the dialogue is strong enough that the sometimes unbelievable twists are tolerable. In the end, it’s the rare pulp mystery in which the people carry the plot instead of the other way around, and that alone makes it an interesting option this summer. 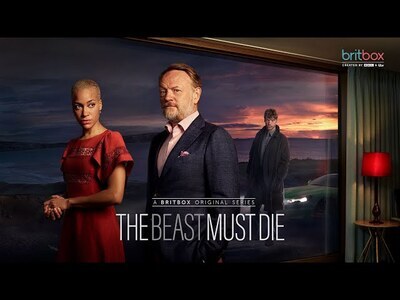