Even if this documentary directed by Lisa Hurwitz had nothing else to recommend it, it would be worthwhile as an excellent source of Mel Brooks. His is the first voice you hear in this tight feature, as we look through a car windshield and see a sign for the town of Ellenville. Brooks is advising Hurwitz on a couple of things and telling her he’s almost finished a song. Soon the auto reaches its destination, a building where there are stored some of the last mechanical remnants of the Automat. Rows of brass-lined glass windows which, when functional, fed New York and Philadelphia in a very particular style for much of the 20th century.

“The Automat” is a tribute to what once was the largest restaurant chain in the United States, despite the fact that it only operated in two cities. The brainchild of partners Joseph Horn and Frank Hardart, the restaurant was inspired by a German restaurant that delivered pre-ordered meals to patrons via dumbwaiter. The innovation here was even more streamlined in terms of service. Put a certain number of nickels in slot, turn a button, and that brass-lined window would open, and you’d pull out a plate of creamed spinach, Salisbury steak, mac and cheese—the rhapsodies inspired by this dishes are repeated over and over by the satisfied nostalgic customers interviewed here, some famous, some not—and desserts like lemon meringue pie. And the coffee! The partners created an urn with a dolphin-head spout, inspired by Italian fountains. One cup was a single nickel, a treat that later would spell trouble for the company.

Hardart’s great-great granddaughter Marianne is one of the relatives who lays out the story. Another is Edwin Daly, the son of the man who succeeded Joseph Horn as president of the company in the 1940s. He is still passionate, even adamant about the original mission of its founders, which was founded on the precepts of simple service and good food.

During a golden age that stretched from before the Depression and into the 1950s, the Automat lived up to its mission, and became famous in the process. Hurwitz offers vintage film clips of celebs from Jack Benny and Sylvia Sidney to Bugs Bunny enjoying a meal there. The restaurants themselves were bright and attractive, with marble counters, half-balconies, elaborately detailed high ceilings.

So Brooks himself recalls, discussing his days as a boy living in poverty in Brooklyn—to whom Manhattan was an impossibly exotic destination—and seeing his first Automat, and moving on to his times as a starving comedy writer who couldn’t afford to eat anywhere else. As he and Carl Reiner reveal, in separate but intercut interviews, they continued to go there even when they were relatively flush, because they loved the grub. Ruth Bader Ginsburg did, too; but she also loved the mix of people the place attracted. As did Colin Powell, whose recollections of how grateful he was to be welcomed, unequivocally, into the Automat when so many other places were racially segregated, are genuinely moving.

The narrative here is both stirring and sad. The movie shows why the Automat was Depression-proof but details the social changes that wound up dooming the place. Edwin Daly recalls how his father nearly had a breakdown after arriving at the painful but necessary decision to raise the price of a cup of coffee from one nickel to two. Daly also practically rages that after 1960 the company was entrusted to people who had no connection to its original impetus. The last Automat closed in 1991. I used to live up the block from its Third Avenue and 42nd Street location, and to tell you the truth, I didn’t go in there much, because it had in fact become a sad shell of its former self. But listening to the way it’s talked about here—man, I do wish I could have been there.

“Don’t tell my mother this, but I liked the ham and cheese sandwich there,” Brooks says, before describing it in the same detail that Reiner remembers. The song he contributes to the movie plays over the end credits; it’s sweet and funny and mostly about that coffee. 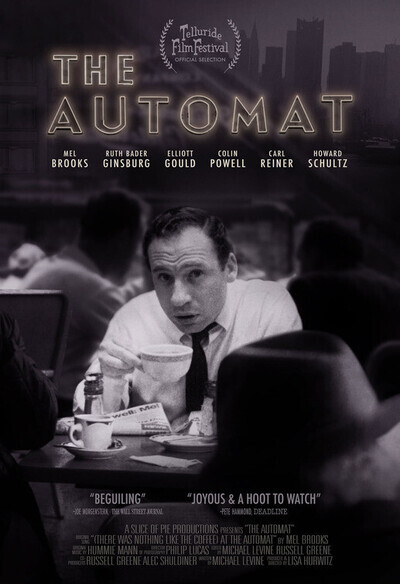 Ruth Bader Ginsburg as Self

Mel Brooks as Self

Colin Powell as Self

Carl Reiner as Self

Elliott Gould as Self

Wilson Goode as Self

Howard Schultz as Self