The Art of the Steal

There are a handful of actors working today whose mere presence justifies whatever film they are in. Kurt Russell is at the top of a very short list for me, and has been so for decades. What a great career. What a niche he has carved out for himself. He brings something uniquely his own to everything he does. He is a sexy leading man, a comedic buffoon, a wonderful physical actor, and a hell of a mimic (see his performances as Elvis Presley and Herb Brooks). His last major role was the so-enjoyable-it-should-be-illegal Stuntman Mike in Quentin Tarantino's 2007 "Death Proof," and that means it's been far too long since he's graced us with his presence. He is back, as the scarred and black-leather-clad "Crunch Calhoun", in Jonathan Sobol's fun and stylish art-heist flick "The Art of the Steal". Packed with great actors, some uproarious sequences, and a fast-moving, far-fletched plot, "The Art of the Steal" looks and feels like a crime thriller, but it's a comedy, and each actor has clicked into his respective role with a gusto and enjoyment that really makes the film.

Part art thief and part Evel Knievel, Crunch Calhoun is the leader of a merry band of international art forgers who have nicknames like "The Rolodex," "The Scratcher," "The Idea Man". Sobol freezes each member of the team, rolling out their names and nicknames in big blocky text, creating a snarky larger-than-life environment in which these eccentrics can operate. There is Chris Diamantopoulos as Guy, the brilliant French forger whose work can even ape proper carbon-dating, and who dreams of a notoriety as grand as "celebrated" forger Yves Chaudron. There is Kenneth Welsh as Uncle Paddy, the randy Irishman who can find buyers for all the fakes produced by Guy, and finally, there is the hot-headed and sloppy Nicky, half-brother to Crunch, played by Matt Dillon, who comes up with the idea for the grand "final score" on which they all could retire.

When the film opens, Crunch has been released from a 5-and-a-1/2 year stint in a Warsaw prison, having been handed up by Nicky as the fall guy for an art heist gone wrong. He makes a paltry living by leaping his motorcycle through rings of fire at car derbies all while wearing a white jumpsuit studded with blue stars. He now has an apprentice named Francie (the terrific Jay Baruchel), a nice wife named Lola (Katheryn Winnick), and a hatred of the brother who betrayed him. He refuses to get involved in any new scheme. He's out, he's done. And yet in his spare time, he sits in his La-Z-Boy reading a book on great art thefts, and lecturing Francie on how various Roman Emperors handled the problems of life. Crunch Calhoun clearly won't be able to stay straight for long.

The thieves are always being stopped at various borders (the film leaps around from Detroit to Quebec to Amsterdam, Paris and London), and a driven Interpol agent (Jason Jones) has partnered with an art-thief-turned informant (Terence Stamp) to try to nail down whatever it is the thieves are plotting. Terence Stamp plays his role in a mild-mannered abstracted way which highlights the frustrated machismo of the Interpol agent, who crushes cups of hot coffee in his bare hands, and then says, after the fact, "Ow." Stamp has a dreamy-eyed monologue about his experience going to the Victoria and Albert museum as a child, and seeing a cup made entirely of jade: "It made me look at everything differently." The whole film stops, surprisingly, beautifully, for his long monologue about what art means to him. A lesser director would have cut that monologue as an irrelevant time-waster. But Sobol (who also wrote the script) not only gives that monologue a great payoff near the end of the film, but he also knows that the plot is not really "the thing" here, anyway. What is "the thing" is the performances, the actors, the shtick, the mood.

"The Art of the Steal" is filled with funny bits of farcical physical business, wisecracks, and an intensifying feeling of entrapment, causing the characters to race around like maniacs. The best of these is when a panicked Francie, who can barely believe the level of crime he has entered into ("Interpol's a real thing??"), is roped into transporting two of the criminals across the Canadian border in the trunk of his car. He glues a long beard to his chin, and proceeds to behave in a totally suspicious manner while being questioned by the border patrol agent, finally babbling, "I'm in a play. Witness, the musical. With an exclamation mark." Silliness like that keeps "The Art of the Steal" afloat. I wish more films felt permission to be as silly as this one is. Everyone is great. Everyone looks like they are having a blast. The right mood is set early on, insouciant, self-aware, and absurd.

As the film moves into its third act, where, traditionally, plot with a capital P takes over, "The Art of the Steal" knows that what interests us is these characters, these actors, their behavior, their interactions. The plot is certainly given its due, and the heist that unfolds is gorgeously complex and insane. But it's wonderful to see a genre film keeping its strong interest in character, rather than plot, right up until the satisfying final frame. Kurt Russell could read the phone book and I'd pay to see it. It's great to have him back. "The Art of the Steal" is only 90 minutes long, and never takes itself too seriously, or seriously at all. The film feels light, but that is not a criticism, at least not in the case of "Art of the Steal". It's why the film works. 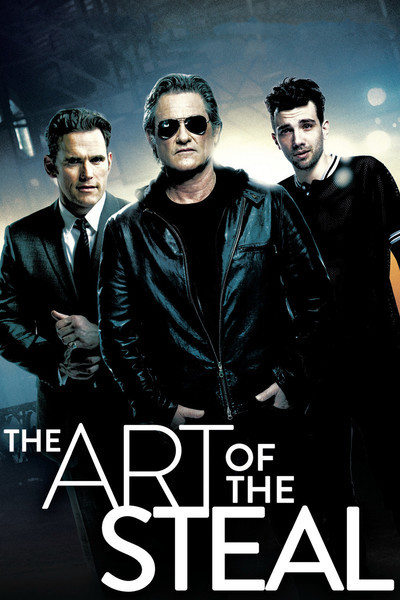