The Art of Self-Defense

Everything about Casey Davies is blandly brown: his clothes, his home, his dog, his demeanor. Even the bag of dog food he picks up at the grocery store on the night his life changes forever is brown—with generic labeling, naturally.

But soon, another color will come to define Casey: yellow. That’s the first belt he earns once he starts taking karate lessons, giving him a burst of confidence he’s never known. But instead of a sunny, cheery yellow, this hue comes to represent something more sinister: bright flashes of anger and a burning aggression.

Writer/director Riley Stearns explores this particularly masculine form of toxicity in “The Art of Self-Defense,” a dark comedy that’s equal parts amusing and disturbing. Stearns is ambitious in the tricky tonal balance he aims to strike here – shocking us in detached, deadpan fashion—and his story wobbles a bit by the end, but the points he’s making couldn’t be clearer or timelier. And he draws an inspired performance from Jesse Eisenberg as the meek accountant who finally finds the sense of self-worth that’s long eluded him, misguided as it may be.

This is an exciting departure from the quick-witted, jittery fast-talker Eisenberg so often has played. There’s a gentle sadness to his understated timidity. Before Casey undergoes his transformation, you can feel him quietly quavering as he struggles to make small talk with the idiot bro dudes in the break room at work. When he comes home, he’s visibly relieved that all he has to do is enjoy the company of his sweet dachshund waiting for him on the couch. And when he gets beaten and robbed in the middle of the street while making a grocery store run for that dog, he doesn’t even begin to fight back; rather, he willingly gives up his wallet to the helmeted motorcyclists who’ve terrorized him. (The fact that Casey’s attacked at night by a band of thugs on motorbikes feels like one of many clever ways Stearns tweaks “The Karate Kid” mythology.)

Once he walks into a strip-mall karate studio in hopes of learning how to protect himself, though, a totally different side of Casey breaks loose. And the person coaxing out this hidden monster is a charming manipulator who insists his students address him simply as Sensei. Alessandro Nivola is both hilarious and chilling as the self-serious instructor; he’s a cult-like figure who has a keen sense of the weak and knows how prey on their vulnerabilities. Casey shows no discernible talent for martial arts, but Sensei wisely recognizes him as easy pickings, and alternately breaks him down and butters him up to earn Casey’s fervent loyalty. Stearns smartly explores the ways in which men seek to gain one another’s approval through both dominance and acquiescence. Casey suddenly begins barking out orders at strangers and behaving violently at the office, but he also starts listening to speed metal at Sensei’s urging rather than his beloved adult contemporary.

But if this fable begins life as a twisted take on “The Karate Kid,” it quickly morphs into a cautionary tale in the vein of “Fight Club.” As Casey gets drawn deeper into Sensei’s world—with its secret night classes and mysterious stripe system—he initially becomes more fascinated and desirous of his acceptance. And yet, Stearns still keeps us at arm’s length, framing and shooting his characters with minimalist precision and having them speak to each other in a self-consciously stilted manner. Their delusional enthusiasm for embodying extreme manly-man tropes would be hilarious if it weren’t so pathetic. This is especially true of one of Sensei’s most rah-rah clientele, a grown-up played with teenage-boy idealism by David Zellner. (He’s also an executive producer alongside his brother and indie filmmaking collaborator, Nathan; you can see traces of their low-key, surreal style at work here).

One of Sensei’s tried-and-true bits of instruction is telling his students to kick with their hands and punch with their feet. This notion and many others may seem contradictory, but the dojo’s regulars are so deeply in his thrall and so desperate for his approval that they’ll buy whatever he’s selling. Within this insular, testosterone-heavy world, Imogen Poots is a welcome source of female strength, even as her character, Anna, strains to retain her dignity amid the misogyny as both a student and teacher.

"The Art of Self-Defense" doesn’t build to the kind of feel-good finale that you’d expect from a more traditional type of movie about the transformative power of sports. But it definitely sweeps the leg in its own way. 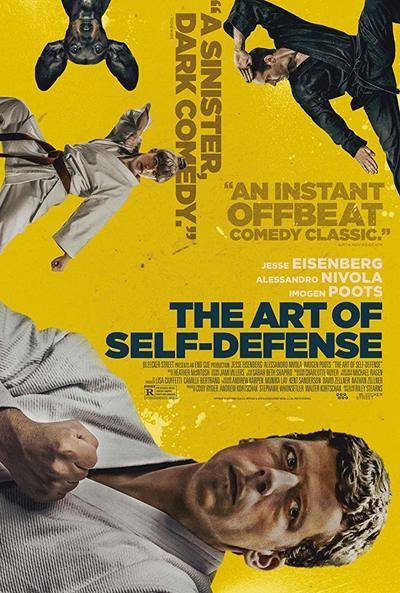