“The Apparition” feels like an attempt to take one of those terrible Dan Brown best-sellers like “The Da Vinci Code” and transform it from a crudely written pulp thriller with quasi-religious undertones into a serious-minded art-house drama, eschewing cheap thrills for serious inquiries about the nature of faith. This is an interesting concept in theory and for a while, it is undeniably compelling to watch, aided in no small part by a couple of strong performances at its center. However, as it goes on (and on), the drama starts getting more diffuse as it tries to figure out a way of resolving the central question driving the story—does God exist or not?—in a satisfactory manner.

Jacques Mayano (Vincent Lindon) is a celebrated French journalist who has just returned from an assignment in the Middle East that ended tragically—an explosion killed his close friend and colleague, leaving him with both a painful ringing in his ears and a profound case of survivor’s guilt. While staying at home in an unsuccessful attempt to process the trauma, he is summoned by a French cardinal to the Vatican for a top-secret meeting. It seems that in a remote village in the south of France, an 18-year-old novice named Anna (Galatéa Bellugi) has claimed to have seen an apparition of the Virgin Mary. Now that the site of her vision has become a pilgrimage destination for the faithful from around the world—with a lucrative cottage industry of t-shirts, prayer books and the like springing up as well—church officials have elected to open a formal investigation of religious and scientific minds in order to determine whether Anna’s story is true or a big hoax. With his keen journalistic mind and lack of any significant religious convictions, Jacques has been chosen to head up the inquiry.

Upon arriving in town, Jacques meets the other members of the team of investigators (including Elina Löwensohn in a role about as far removed from her part in the current oddity “Let The Corpses Tan” as can be), local priest Father Borrodine (Patrick d’Assumçao), whose reluctance to cooperate with the investigation may have something to do with the money currently pouring in thanks to Anna’s notoriety, and, eventually, Anna herself. While he may not have an ecclesiastical horse in this particular race to speak of, Jacques does find himself becoming increasingly intrigued by Anna as a person when looking into her past—she was an orphan raised in foster homes before entering the convent—to find anything that might prove or disprove her claims. And yet, even as an improbable friendship begins to develop between the two—presumably fueled in no small part from the sense of isolation that they both now suffer from—Jacques makes some discoveries that raise questions about both Anna’s claims and the position of the church, especially regarding a slick religious marketer (Anatole Taubman) who wants to make Anna into an international multimedia sensation.

The early scenes of “The Apparition” are the best, especially a long a fascinating sequence set in the Vatican’s underground archives in which Jacques has his mission explained to him and gets a glimpse of the number of previous claims of apparitions that have been investigated over the years. The trouble is that while co-writer/director Xavier Giannoli does a very good job of establishing things early on, he doesn’t quite pull it off. His decision to take a very serious—almost solemn—approach to the material is initially interesting but becomes a slog, especially regarding story aspects like the crass commercialization of Anna’s visions that cry out for an approach that is more overtly angry or satirical that what is presented here. The pacing of the narrative is also a bit strange—the story is broken up into six sections clocking in at about 140 minutes and yet somehow manages to feel both too slow and too rushed at the same time, like a TV miniseries that was hurriedly reduced to a feature length without ever finding the right rhythm.

The biggest problem, perhaps inevitably, arrives when the conclusion has to give answers for what may or may not have happened. The trouble is that the movie wants to both provide a concrete explanation while holding out an olive branch to maintaining the concept of faith even in the modern era. By attempting to simultaneously pull off both of these notions, Giannoli is certainly being ambitious but he ultimately falls short as the second half of the story starts getting caught up in the mechanics of the plot while increasingly leaving the more ambiguous elements that it has been dealing with to the side. The worst part is the conclusion, which tries to wrap the story up with a dopey explanation that makes the finales offered up by Dan Brown seem plausible by comparison, as well as a last-minute revelation that forces the reconsideration of everything seen up to that moment.

“The Apparition” is not entirely without interest—the early scenes, as noted, are undeniably fascinating, it looks good throughout and the performances by Lindon and Bellugi are both effective, especially when they are in scenes together. However, the story doesn’t quite seem to have a clear concise idea of what it's trying to accomplish. Regarding spiritual matters, "The Apparition" is undeniably more serious-minded and more successful than the likes of films such as “God’s Not Dead” and its ilk. As an example of satisfying dramatic storytelling, however, it falls frustratingly short. 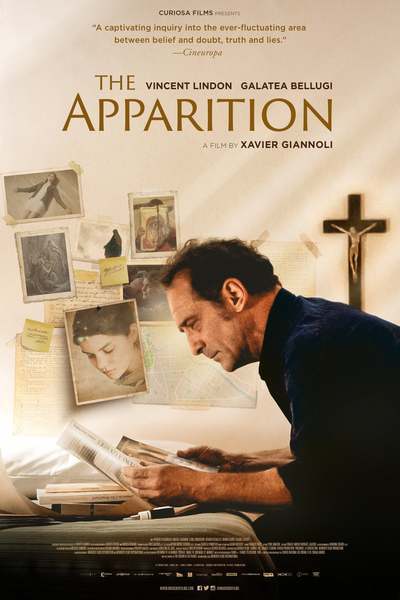