A knock on the door in the dead of night. It's almost Christmas, and there's snow on the ground. The wind moans. After reviewing a news story about Sally, her teenage daughter, Darlene Hagen (Anna Gunn) has finally settled into bed. Sally went missing about 20 years ago, and Darlene has been waiting for a knock on the door. It's her ex-brother-in-law Jack (Linus Roche), formerly attached to Darlene's sister. Darlene's not ready to talk with Jack, but she's about to anyway.

"The Apology" is a grim and mostly satisfying locked-room thriller about Darlene and Jack's complex and often unpleasant conversation. They both have things they feel compelled to say. Moreover, they both have something they need each other to do for their peace of mind. Nineteen years have passed since Darlene and Jack last spoke to each other, a long time to live in fear and misery, but maybe not enough to confer wisdom or perspective.

There are occasional breaks in their conversation, mainly from Darlene's best friend Gretchen (Janeane Garofalo), who lives a few hundred feet away. But "The Apology" is essentially a two-hander set in a dark and seemingly endless present moment. What starts as a cordial, if slightly punch-drunk, catch-up inevitably becomes a vague and unsettling confrontation. Jack's needs appear apparent on their face since he can't stop expressing himself. But this is Darlene's house, and she isn't a passive victim.

"The Apology" is also a revenge fantasy, so it's easy to anticipate what comes next. It's easy to project one's feelings onto Darlene and Jack's dialogue, given that so much media coverage of post-MeToo predatory behavior is focused on abusive personalities instead of their many and understandably reluctant victims. Outrage sells, and victimhood is only attractive if it flatters your audience.

Writer/director Alison Star Locke's characters talk and behave like real people, with messy, half-planned ulterior motives that extend well beyond their stated desires. That's not just because of Gunn and Roche's measured performances and compelling back-and-forth chemistry. Locke and her collaborators—especially cinematographer Jack Caswell, sound designer Julie Diaz, and their respective teams—keep their drama focused on its mercurial tone. Because both Jack and Darlene have been dreading their talk almost about as much as they've anticipated ways to keep it manageable.

Locke and her team pay close attention to the dime turns and jarring twists that lead Darlene and Jack from one revelation to the next. Zip ties, old photos, and dead phones are introduced and used sparingly, and circumstantial peril only reflects Darlene and Jack's defining confusion and upset. Locke and her crew rarely lean so hard on their characters, either by flattering or vilifying them, to take us out of this specific moment.

"The Apology" could have been a sad wallow that vainly pushes buttons for cheap catharsis. That's ultimately where the movie lands, but by that point, the film's already successfully put you through the wringer. Anything after that isn't as important.

You can see that Locke understands this pulpy assignment in that she routinely makes her actors serve the scene's mood over everything else. Some lines beg for over-emphasis, like when Darlene says to Jack: "You asked if I had a revenge fantasy. Well, I lied." Thankfully, this line doesn't derail that particular scene. It's a comma, not a full stop, so the scene continues. It develops at its own pace, breaking up and resuming with a familiar but still credible logic.

Likewise, the violence in "The Apology" is disorienting and appropriately tamped down. Gore, declamatory speeches, and other displays of melodramatic sturm und drang are all theoretically fine and pleasurable, but only when they're used in a way that enhances whatever else is going on in the movie. Watching "The Apology," one gets the sense that Locke and her team got to tell the exact story they wanted to and on their terms. Their drama has unusual integrity since it's (mostly) not about canned answers to complex questions.

Instead, "The Apology" concerns how painful it can be to air out grievances that many of us would rather let fester in private. Don't let the title fool you: Locke's movie is about the waking nightmare of processing one's emotions with the people who have hurt you and working with them to negotiate something as uncertain and essential as justice. 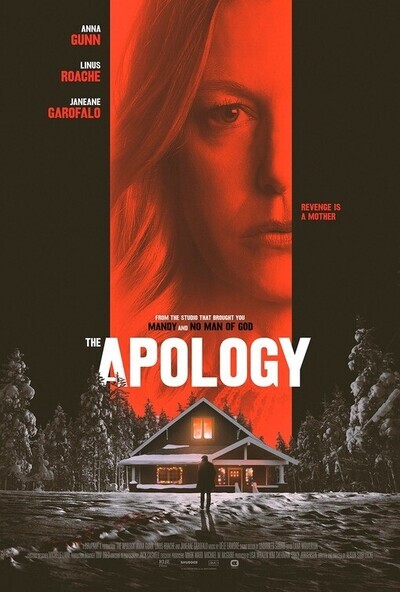