Tom Harper’s “The Aeronauts” begins just as Amelia (Felicity Jones), a balloon pilot, and James (Eddie Redmayne), a scientist desperate to prove his theories about the weather, take off on their 19th century vertical adventure in front of a large crowd to much fanfare. In flashbacks, “The Aeronauts” explains more about their tenuous relationship beyond pilot and scientist: how she lost her husband in a ballooning accident and how James had been laughed at by his colleagues for his outlandish ideas. Eventually, James decides to prove his findings and hires a still-grieving Amelia to lead the journey—a generous offer she’s hesitant to accept. Back in the present ascent of their balloon, Amelia and James face many more dangers and setbacks as they shatter the height record and put their lives at risk for science.

Although it’s stuffed with many cliches, “The Aeronauts” can feel like a rather enjoyable bit of historical fantasy. Redmayne’s character is based on James Glaisher, a real British scientist who did break that height record in his day, but his partner on this expedition, Henry Coxwell, has been replaced with Jones’ character, who herself is an amalgamation of several balloonists including Coxwell, for his heroics during his expedition with Glaisher, and Sophie Blanchard, one of the few women in the field of aeronauts and someone who continued to balloon after her husband’s death in an accident.

Harper, who co-wrote the script with Jack Thorne, introduces Amelia and James as a kind of “Men are from Mars, Women are from Venus” pair of polar opposites. Amelia has an adventurous, outgoing spirit with a sense of understanding of playing to a crowd and entertaining others. James is more of a solemn soul who wants so desperately to be taken seriously as a scientist, he almost doesn’t see Amelia’s anguish as she deliberates going up in a balloon after her husband’s fall or the dangers he might put them in because he wants to push beyond the balloon’s limits. Although Amelia is clearly a strong female character, the writers thankfully don’t saddle her with the weight of needing to represent all women. She’s an aeronaut because she wants to be one, not because it’s the right thing to do. They’re almost cartoonish in their differences, which thankfully, doesn’t last too long as they're the only characters we’re stuck with for the majority of the film. Jones and Redmayne strike up a flirty rapport that makes the movie even more interesting as the stakes (and the balloon) grow higher. Might she find love after loss? Will he find the results he’s looking for? It will all be for naught if their balloon crashes.

The thrill of “The Aeronauts” lies in its death-defying stunts. The actors may be safe, but the movie makes us forget that with the use of cinematographer George Steel’s clever camera angles and tensioned-filled shots and Mark Eckersley’s quick editing. There is a lot of CGI in this film, all in the effort of putting on a good show. Beyond the unglamorous but realistic mess inside the basket of a hot air balloon lies CGI landscapes of 19th century England, which the digital camera seems to soak in as if it were another viewer along for the ride. There are also these grand, majestic shots of our heroes up-in-the-air hundreds and thousands of feet above the earth that work as both artful breaks from the cramped space where the characters are and terrifying reminders that this whole thing can go down at any minute. These shots are composed so convincingly, that there were many sharp gasps in my audience. That response intensified the higher the balloon climbed, the lower the oxygen became and the colder it got for our heroes.

The tense “will they or won’t they make it” scenes work so well that the movie can be forgiven for its clumsier earthbound moments. And with the help of Redmayne and Jones’ charming performances, they keep the movie light and their characters somewhat tolerable even though they’re thinly written. “The Aeronauts” is built around the spectacle of its historically accurate vistas and its depiction of the beautiful but potentially deadly skies (which plays better on an expansive screen). What begins as a cutesy showdown between the sexes solidifies into a genuine struggle to return to the ground in one piece. 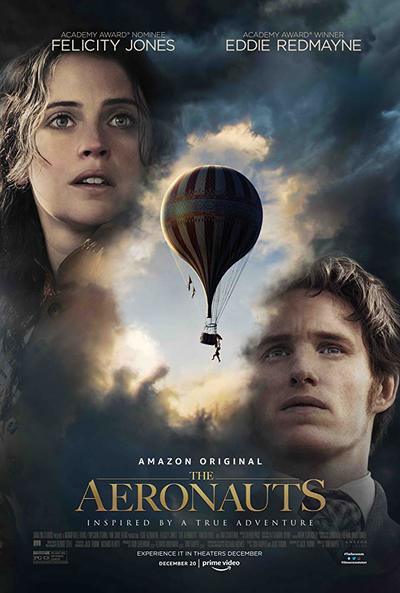