At first, “The Abandoned"—previously known as “The Confines”—is a relatively promising horror thriller. I dig haunted house pictures: scary movies with few characters that allow tension to come from the environment rather than being distracted by dull performances. Two to three people in a haunted old apartment building? Sign me up. And for the better part of an hour, director Eytan Rockaway pulls off the set-up. But just when you think this IFC Midnight flick will slide into an effective genre track, it flies off the rails in spectacular fashion, getting more unbearable and ridiculous all the way up to its closing minutes. All goodwill from that first hour is dead and buried by the last scene, abandoned by a screenwriter and director who had no idea where to take this story.

Louisa Krause (“Martha Marcy May Marlene”) plays Streak, a beautiful young woman who takes a job on a two-person overnight security team in an old, once-gorgeous apartment complex. Streak will patrol the grounds every two hours while Cooper (a deeply slumming Jason Patric) stays in the monitor room and keeps an eye on the screens. Do they really pay teams of two to work this much high-tech security equipment in buildings that are abandoned? Things are obviously a little suspicious from the very beginning, especially as Cooper keeps talking about how he’s been there forever. With its captivating setting and solid actors willing to bounce around it, “The Abandoned” shows promise.

For about 45 minutes, that promise grows. Rockaway is an effective filmmaker when it comes to sound design and atmosphere. He also wisely doesn’t force too much dialogue on his characters, often letting Streak wander the grounds in silence, adding to the tension. When she finds a locked door and hears something behind it, it’s a chill-inducing moment in which one hopes that this film has some secrets instead of just jump cuts and clichés. I also liked the few character scenes between the two leads in the monitor room, their faces lit largely by the blue hue of the screens projecting emptiness back at them. Patric and Krause are up to the challenge of doing something with minimal character beats, both capturing people who might take a lonely job to avoid the rest of the world. I’ve missed Patric, once such a vital actor on the independent scene (go rent “After Dark, My Sweet” and “Your Friends & Neighbors” if you haven’t seen them, and get back to me). It’s also always nice to see the great character actor Mark Margolis, who pops up here as an angry homeless man looking for a place to sleep for the night aka Horror Movie Victim Bait.

Then, at a moment those of you who venture to see “The Abandoned” will be able to pinpoint, the film just goes loopy. It’s as if someone opened a Bad Genre Cliché Book and just started ripping out pages and shoving them into this script wholesale. We learn the dark history of the building; we learn that Streak is on anti-psychotics (so maybe she’s imagining it all), and she even says something about being able to see things her whole life that she can’t describe. And then Rockaway really goes for it, merging a bit of “House on Haunted Hill” in with his vision. Ghosts, demons, abandoned children—again, it becomes a carousel of nonsense we’ve seen before, but done better. When the wheelchair-bound Cooper is forced to get mobile in the third act, it really collapses in on itself with shoddy filmmaking and stupid plotting. It’s at this point that I stopped wondering why Jason Patric wasn’t really acting that often anymore and started wondering why anyone even starts into the profession at all, knowing they could end up in “The Abandoned.” 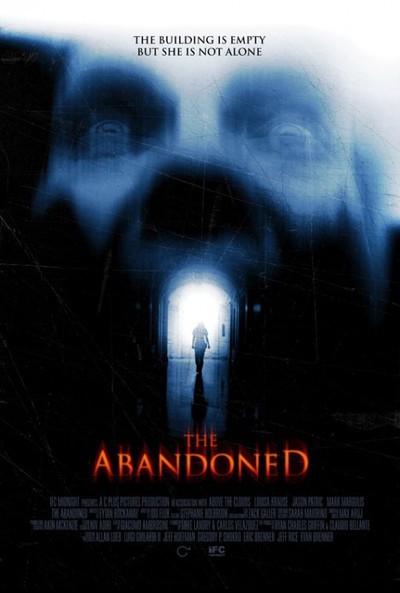