Thought and care obviously went into the writing of "Thanks for Sharing," the first film directed by "The Kids Are All Right" co-writer Stuart Blumberg. It's easy to imagine long, thoughtful discussions between Blumberg and his own co-writer Matt Winston about the nature of addiction and how it would relate to each of the characters in the movie. The tone of "Thanks for Sharing" is somewhat similar to the tone of "The Kids Are All Right": earnest, modestly exploratory, definitely smart, but extremely judgmental toward some of its people.

"Thanks for Sharing" opens with Adam (Mark Ruffalo) kneeling by his well-appointed bed in his underwear. It quickly becomes apparent that he is praying, and his religion, it turns out, is of the twelve-step recovery community variety. When Adam walks the streets of Manhattan, he keeps getting bombarded by sexy ads and sexy women strutting past him, and from his point of view this is all temptation to fall off the wagon.

Adam considers himself a sex addict. Following the rules of his guru Mike (Tim Robbins), Adam has not had sex with anyone and has not even masturbated in five years. In Mike's program, you are only supposed to have sex when you have worked through your sexual addiction issues, and when you have done so, you can only have sex when you are in a committed relationship. This all sounds harsh, even grotesquely puritanical, but Blumberg treats Mike's worldview with patient yet uneasy seriousness.

The first half of "Thanks for Sharing" plays out in a netherworld that isn't quite comedic but isn't quite serious enough, as if Blumberg is treating his own movie as a patient who might have a relapse at any minute. The second half of the film lays on some fairly heavy dramatic scenes involving physical violence and emotional upsets, all carefully prepared for in the writing and in the acting, and you can admire the skill that has gone into the shaping of these scenes while also rejecting their ultimate aim.

"Thanks for Sharing" is a movie that has been planned and micromanaged down to the last detail, and it could use much more unpredictability, much more unsteady life. Of all the cast here, the least experienced is the pop singer Pink, yet she does the best acting in the film: natural, a little harsh, a little unstable. Pink, like Macy Gray in her Lee Daniels movie roles, knows instinctively how to behave on camera by just pretending that the camera isn't there. This comes as a relief, but it also seems like a way out that "Thanks for Sharing" doesn't take.

After learning about Adam's self-denial, we keep waiting for the big reveal, the sexual low points that brought him to this stage in his life, but what he tells his new girlfriend Phoebe (Gwyneth Paltrow) doesn't sound like anything so bad. He slept with some hookers and he had a few girlfriends at the same time. By that standard, an awful lot of heterosexual men in Manhattan could be considered sex addicts.

Neil (Josh Gad), on the other hand, is a guy who gropes women on the subway and tries to get a camera recording up his boss's skirt. He is not having sex with anyone, but he has serious and criminal problems with sexual impulse control, yet the film twists itself into knots making him into a guy you can root for, even though what we have seen of his behavior in his first scenes points in a much darker direction.

So we have one character (Adam) who punishes himself severely for very little reason, another character (Neil) who behaves very badly but seems to get off the film's judgmental hook with ease, and a third character (Mike) who is gently spoofed for his twelve-step homilies but never really probed for his own weaknesses, which have led to estrangement with his son Danny (Patrick Fugit).

Can you think of a recent American film in which either a man or a woman has an active, adventurous and healthy sex life outside of "a committed relationship" and isn't somehow punished for it, often quite nastily? Forty or so years ago in "Shampoo" (1975), Warren Beatty's Don Juan hairdresser was made into a figure of yearning sympathy. With Steve McQueen's recent "Shame" and now with "Thanks for Sharing," we have moved into an era where sex without strings is being demonized as some lower rung of hell.

Yes, sex is dangerous, and it is supposed to be. Women can get pregnant, diseases can be caught, and miscommunication between casual partners can lead to extreme trauma, which is what happens when Adam does a little role-playing with young Becky (Emily Meade) toward the end of "Thanks for Sharing." Unfortunately, sexual role-playing is so seldom featured in American movies that the way this ugly scene plays out makes it look like an urge for role-playing in sex can only be the result of a damaged psyche. "Thanks for Sharing" is well done for what it is, but that doesn't mean we should give credence to its pathologizing of sex under the rubric of recovery and conformist groupthink. 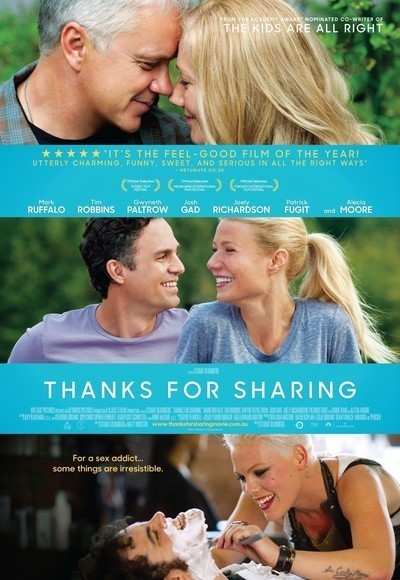